A global revolution started inside a dorm room in April 2004. Shocking, right? These days maybe not, but in 2004 nobody would’ve predicted how broadly the social media site Facebook would cover the world given its humble beginnings. Even Mark Zuckerberg, founder of Facebook, might not have predicted his company’s impact on a map one decade later. Thanks to Facebook’s Silicon Valley neighbor Google and its “Google Trends”, we have access to that map over 6 years time. Facebook represents a larger reality than most people would think and these maps provide the ability to see it. As social media sweeps the globe, so does the demand for information, connection, and various freedoms the Internet can provide. Facebook is inspiring human agency and, based on how quickly the company is growing, the world is clearly loving it. 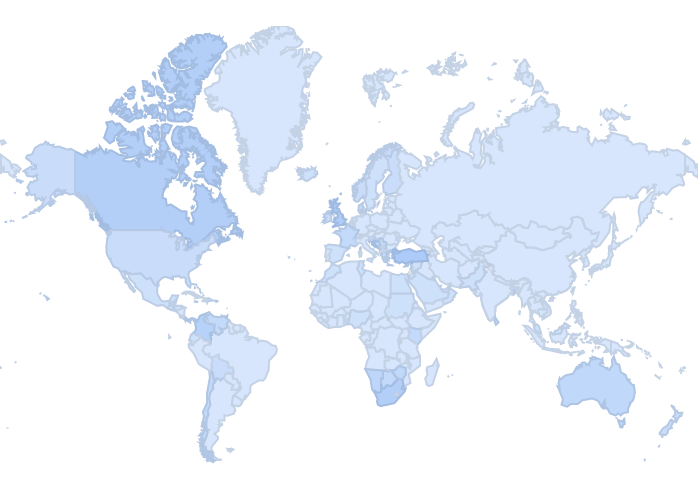 Let’s start in 2008, when Facebook began to break onto the international social media stage. First, the projection is almost like a Mercator map due to its distortions. By preserving angles and shapes of small masses and distorting the size of larger masses, we see the Northern Hemisphere is larger than the Southern Hemisphere. Mercator maps are used to create straight lines from one object to another, but its unclear why the authors chose this. The maps are shaded in blue (Facebook’s primary color) to signify each country’s “Search Volume Index”. SVI is a relative measurement calculated to find the average traffic for the time period that you see on the result page. This means that if a certain country’s population just recently discovered Facebook, it will be a darker blue. Trending creates more traffic and more hits, and therefore the SVI goes up. Trending is ignited when Facebook releases additions like more languages, mobile apps, Skype video chat, and other features to make headlines. At this point in the company’s career in 2008 there are roughly 90 million online users globally, but we can see that Facebook is still on the “come-up”, as SVIs are low, signified by the light blue. Each individual country’s color is based on their SVI relative to their future SVI, and the SVIs of other countries.

We immediately see there are some silences in the map, as well as political choices the maps’ creators have made. It’s critical to question why the United States is no darker than most countries around them even though Facebook and the Internet were built and first established in the U.S. This is because the map doesn’t show the number of users per country. Mexico and the U.S. are the same color in this first map because trending is low. However, the respective reasons for little trending are different; the United States has already established a solid followership while Mexico has not. Facebook is beginning to trend in countries like Turkey, the U.K., South Africa and Australia, and their SVIs are slightly higher. To be clear, the maps are essentially pointing out what is exponentially popular at a certain time rather than the numerical degree of its popularity (or total amount of users). It’s also crucial to point out that national boundaries are highlighted, which is a political statement. The authors are declaring each nation possesses unique interests in Facebook, and yet Facebook is transcending those barriers. If we took away the gray lines, the tie-dye blues left would show connectivity between countries. Facebook is free flowing into whatever market allows its presence, and national borders can rarely hinder that process. 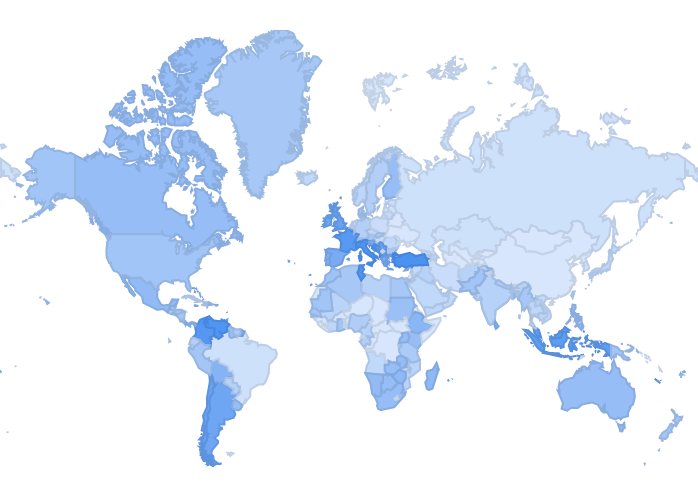 In 2010 we see substantial growth in Europe, Indonesia [i], and parts of South America. While there are more gradual changes between 2008 and 2010 in Turkey, Columbia, Chile, and a few other countries, Indonesia becomes a darker blue very quickly. Indonesia, like many Asian countries, is becoming increasingly connected to the Internet. With the world’s fourth largest population Facebook is capable of trending incredibly quickly, just as it did. It is fair to say that most of the world, including many African countries, has started to pick up on the Facebook revolution. The national boundaries shown become irrelevant because the darker colors represent a newfound connection and freedom. However, there are three big outliers and all happen to be some of the world’s biggest populations. Those are China, Brazil, and Russia. The reason for these giant absences in the Facebook population must’ve infuriated Zuckerberg at the time. In 2010, other forms of online social media dominated. Qzone (China), Orkut (Brazil), V Kontakte (Russia) were all established as the most popular social site throughout their countries. The blatant absence of Facebook in populated or at least technologically advanced nations subtlety points out that there are indeed competitors to Facebook’s global dominance. However, Facebook has an advantage over other social media sites because its widespread popularity creates more opportunities for connection around the globe. 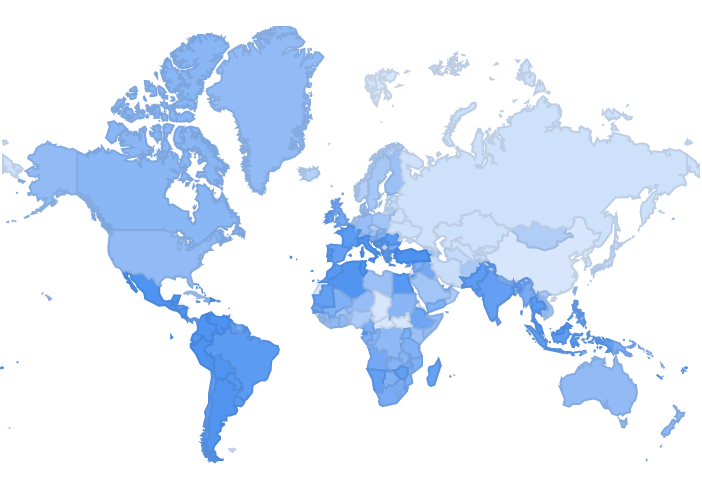 By the time 2012 hits, Brazil has said goodbye to Orkut and hello to Facebook. With Facebook trending in almost every other country in South America, it makes sense that Brazil, in order to connect to its neighbors or European roots in Portugal, would gravitate to the most globally popular social media site. Another new country that abruptly trends is India. Given its second largest population in the world, a country like this might create a ripple effect that draws intrigue from other countries. This is where social media can become overwhelming for governments of countries that notoriously blockade much of the Internet. Facebook serves as a form of free speech, a right that not enough nations afford their citizens. A phenomenon such as Internet freedom can especially act as a liberator for overly censored countries. In the 2012 map, many countries in Southeast Asia, Africa, and the Middle East follow India with increasingly blue SVIs. In all of these areas, widespread Internet access is a recently developed concept, and it seems realistic to believe that newcomers to the Web will choose to spend time on what is popular, secure, and grants online freedom. The Spring Awakening in 2011 occurred among Middle Eastern and African countries, and social media played a large role in gaining support and funding. These movements were drastic examples of how Facebook and other media sites granted people abilities and agents to overthrow a government. 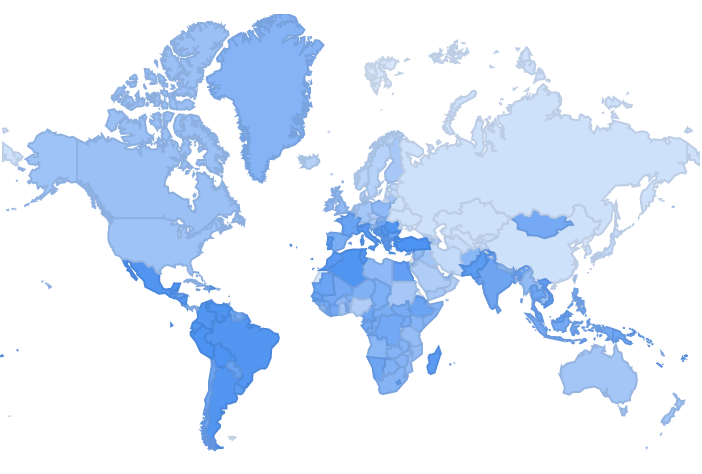 Finally, we get of glimpse of the Facebook revolution operating as we speak. Much of the “Western World” is a lighter shade of blue to signify that Facebook is thoroughly established among target audiences. Countries like the U.S., U.K., Canada, Australia and parts of Europe have remained light blue or even become more light blue since 2008, meaning trending has died off and the “Wow, this is new!” factor is gone. Countries in South America, Africa, Asia (Mongolia!), and the Middle East continue to grow dark blue as these regions gain more access to Internet and learn of its ability to connect and empower. The absence of Facebook in China and Russia could be due to strong censorship by their respective governments, or because Qzone and V Kontakte still have very strong fan bases. Regardless, there is no denying that Facebook has reached billions of people including citizens of those countries. The map implicitly states countries disallowing Facebook are choosing not to participate in something that has benefitted the rest of the world with its connectivity.

What is Facebook? It is a vehicle for connection, individuality, and agency. These maps’ lives show that the world is itching for these types of freedoms. Natural, social, and political boundaries have barred many nations from each other for centuries. For the first time in history Facebook is transcending barriers, bringing societies together, and celebrating this change. As a result, the world gets smaller as Facebook grows. These maps matter because it shows us firsthand how people react to this newfound freedom online. The darker colors show a desire to connect with different cultures they didn’t know about before because they were too censored or the world was too big. The maps don’t need numbers or words to speak for the freedoms Facebook affords. If drastically different cultures can embrace Facebook the same way, Facebook must provide a shared element of inclusiveness that humans naturally strive for. Facebook is shrinking the globe rapidly – shockingly, it’s growing even faster and it all started in a dorm room.

[i]  Quick note about Indonesia: I lived in Java and Sulawesi for three months in 2012, and Facebook is HUGE. Almost everybody I met had it, including my homestay mother who would even go online at the dinner table.