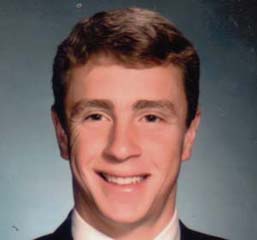 Self-sacrifice is one of the principal defining features of heroism. No one embodied this principal better than Welles Crowther, a 24 year-old investment banker who sacrificed himself on September 11, 2001 in order to save the lives of at least 12 people inside the South Tower.

Welles was a very smart and ambitious young man, and on the morning of September 11, 2001 he had every reason to fight for his own life, which was tracking toward great success. Fortunately for South Tower employee Judy Wein, along with dozens of others, Welles took it upon himself to change the outcome of a situation that would have meant certain death without his intervention.

Welles looked up to his father from a very early age, which is what led him to follow in his footsteps and become a junior volunteer firefighter at age 16. Although Welles did receive training as a volunteer firefighter, many people would still have considered him a kid, or at least a young adult, at age 24.

From the perspective of Judy Wein, one of the direct recipients of Welles’ aid, “people can live 100 years and not have the compassion, the wherewithal to do what he did.” The difference between Welles and most of the people in the Trade Center Towers on that horrific day is that Welles dismissed the fear of his own death and made it his sole mission to help as many people escape as possible.

After United Airlines Flight 175 crashed into the South Tower, Welles made his way down to the 78th floor sky lobby, where he found a group of dazed and confused survivors huddled near the elevators. According to 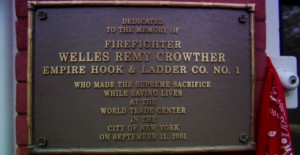 witnesses, he was already carrying a young woman on his back when he took control of the disgruntled group and directed them in a “strong, authoritative voice” to the stairway, where he led them down fifteen flights of stairs to safety.

Rather than escape the building with the first group of survivors, Welles turned around and ran back up the fifteen flights of stairs, where he found a second group of distressed survivors. He helped put out fires surrounding the group, administered first aid to those in immediate need, and led the group downstairs. Welles repeated this process several times, and was last seen entering the chaos with firefighters before the South Tower collapsed.

We consider Welles to be a hero because he exhibited extraordinary bravery and selflessness in the face of grave danger. He disregarded his own safety in a situation in which the majority of people would put themselves first, and by doing so he saved the lives of more than a dozen people, many of whom have said individually that they believe they would not have made it without his help and guidance.

Welles not only directly helped those individuals, he also inspired other survivors in the South Tower to help the get the injured to safety. Welles did not know that his story would be told, and he was not acting in order to gain fame or respect. He simply felt that it was his responsibility to do everything in his power to help every person that he could.

Hayden Stults, Amelia Knight, and Abby Goethals are undergraduate students at the University of Richmond. They wrote this essay as part of their course requirement while enrolled in Dr. Scott Allison’s Social Psychology class. Abby is the niece of George Goethals, one of the co-founders of this blog.