In the News #3- Lithosphere

This website, Live Science, covers scientific discoveries from a broad range of fields. There are sections for technology, health, earth, animals, etc. so there is a little bit of something for everyone. I chose to look at recent news articles in the Planet Earth section, and found an interesting article from 11/30 about an Earthquake in Alaska. The earthquake was initially reported by the U.S. Geological Survey as having a 6.6 magnitude, but it was later updated to 7.0. The photos of the damage were astounding, and it relates directly to our previous studies about the lithosphere and the causes and consequences of earthquakes. It is much more interesting reading about earthquakes when you have an understanding of why they are happening. The article then goes on to discuss the aftershocks that were occurring in the region and gives an overview of how earthquakes happen. This article is obviously very relevant to what was on our previous test about the processes that take place beneath Earth’s crust. This site was also very informative, and I highly recommend that you guys check it out. It seems to have a little bit of something for everyone, and I plan to explore it later on! 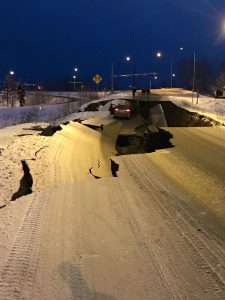 2 thoughts on “Earthquake in Alaska”