In the well-known television and film series, Star Trek, space is often referred to as the “final frontier.” However, much closer to home, the earth’s oceans remain relatively un-explored and a major mystery for scientists, geographers and oceanographers today. The website I reviewed is dedicated to a project aimed at answering the unanswered questions of the deep seas.

The website, http://www.interactiveoceans.washington.edu is designed to inform the public about the National Science Foundation Ocean Observatories Initiative. According to the website, a greater knowledge of the ocean’s interrelated systems is vital for increased understanding of effects on biodiversity, global warming, ocean and coastal ecosystems, environmental health and climate. Furthermore, the website stresses the need for more real time data, over extended periods of time, so that we can be better prepared for future catastrophic oceanic events.

In order to accomplish these tasks, the National Science Foundation has created the mission of designing and constructing a U.S. regional cabled ocean observatory in the Northeast Pacific Ocean that will serve researchers, students, educators, policymakers, and the public. These cable networks will provide significant electrical power and high telecommunications bandwidth in real time to an array of sensors located on the sea floor and throughout the water column. The hope is that these cable systems will enable scientists to understand more fully the major ocean currents, active earthquake zones, creation of new seafloor, and marine plant and animal environments.

The first cable ocean observatory to be implemented will be launched with nearly 900 kilometers of cable across the Juan de Fuca tectonic plate, running from a shore station in Pacific City, Oregon, out to the Juan de Fuca Ridge and south along the Cascadia subduction zone to Hydrate Ridge. 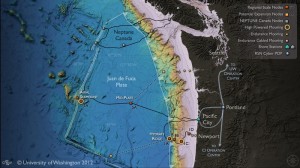 The website includes links to pages discussing what the project is, the technology and instruments involved, maps of where the sites will be, the research that the cable systems will provide, how it can be used as an educational too, data already collected, and a gallery of photos and maps. The picture below shows the essentials for the cable system. 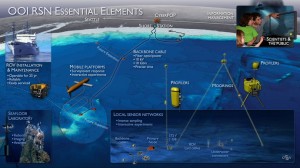 This website was very interesting, and I highly recommend it if you are at all wondering how we are going to be monitoring oceans and oceanic events in the future (like ocean crust earthquakes and tsunamis).

One thought on “Ocean Observatories Initiative”