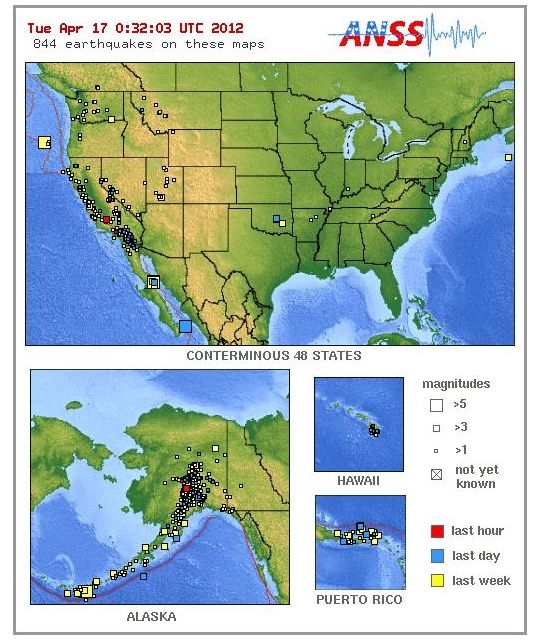 We have spent a lot of time throughout this course discussing earthquakes as they are an important consequence of the phenomenon of plate tectonics in the lithosphere and cause long lasting effects on the biosphere when they occur. In class we often focused on the largest, most local, and most significant earthquakes. The earthquake in the Philippines, the tsunamai caused by the earthquake in Japan, and the termor felt in our backyard in Mineral, VA are all events that are well documented and widely known about. However, during one of our lectures, we were presented with a slide that revealed the estimated probability of an earthquake occuring in any given region across the United States. Of course, western California and the Aleutian Islands in Alaska were the most areas of the highest expected earthquake activity. Still, there was a spot in central Virginia which was higher in probability than surrounding regions.

As I recalled that map I wondered how often do earthquakes actually occur? Are the earthquakes that we feel ourselves, and that make the news more or less the majority of earthquakes that actually occur, or do I have absolutely no idea how often the Earth is flexing it’s tectonic muscles? Luckily, I stumbled upon the site linked below which I found to be truly astonishing. The website (compliments of USGS) displays up-to-date earthquake occurrences across the United States and symbolizes them by intensity as well as how long ago they occurred. I was shocked to see that when I last checked, in the previous hour there had been seven earthquakes in the US including Alaska and Hawaii.

Just click the “Refresh” button to view the most recent earthquakes in the US!

These maps reinforced in my mind the idea that battle between tectonic plates is a constant war being waged, and that the times when we can actually feel the ground trembling ourselves are just grand moments in the eternal push-and-pull of the earth’s tectonic plates, and that perhaps one of the most revelant ways that science can save human lives is through furthering our knowledge of these natural forces.

3 thoughts on “Check Out the Most Recent Earthquakes in the United States!”