After talking about volcanoes in class I became interested in learning more about them. I came across an interactive website that explains how volcanoes form and how humans react to them. The site features different sections about volcanoes each featuring their own video clips.

The mantle is a large layer of rock that is mostly solid. Rock from the mantle will melt and is able to move to the Earth’s surface through weak spots in the crust in a volcanic eruption. Most volcanoes occur on plate boundaries or over a hot spot. Colliding plates or convergent plates tend to create large, classic, cone-shaped volcanoes called stratovolcanoes. These volcanoes also tend to be particularly explosive. At separating plates or divergent plates, shield volcanoes tend to be formed. Shield volcanoes have gently sloping sides and the lava flow tends to be calm and smooth. Hotspots also cause shield volcanoes to form.

Volcanic eruptions cause many different types of hazards. In an explosive eruption, pent-up gases escape violently and magma bursts from the volcano. The cooled magma can cover large areas with a thick layer of ash, which is very detrimental. Pyroclastic flows are a mixture of hot gas and cooled magma. These flows are very dangerous as the flows move at very high speeds, so the destruction is spread over large areas quickly. Volcanic eruptions can also cause earthquakes, tsunamis, or the release of suffocating gases. All of these hazards pose threats to human life, property, and the environment.

Scientists are becoming more and more accurate in detecting the warning signs of volcanoes. Many different types of tools, such as the correlation spectrometer, have been developed to aid scientists in their predictions. Although volcanologists are becoming very skilled at predicting the likelihood of an eruption many different barriers remain. Monitoring potential eruptions is expensive. There are many volcanoes in the world that only erupt every hundred or thousand of years. Thus, scientists are not able to fully monitor every site. However, for the most part with monitoring devices people will be warned well before a disastrous volcanic eruption occurs. 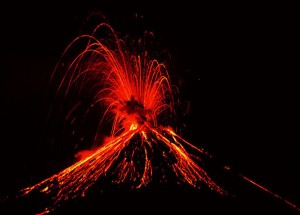