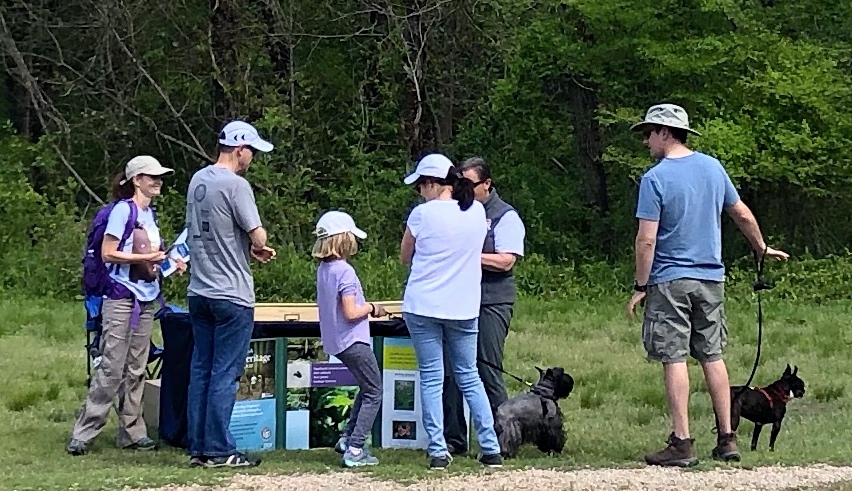 A family learns about species native to the James River area from a park employee during BioBlitz 2019. (Photo by Marina Winkler)

A voice reaches out through the rush of wind and the distant whistle of a train.

“Are you guys here for the BioBlitz?”

The person behind the voice, a young woman with her hair pulled into a neat bun named Penelope Davenport, steps out from under a tent fluttering wildly in the breeze. 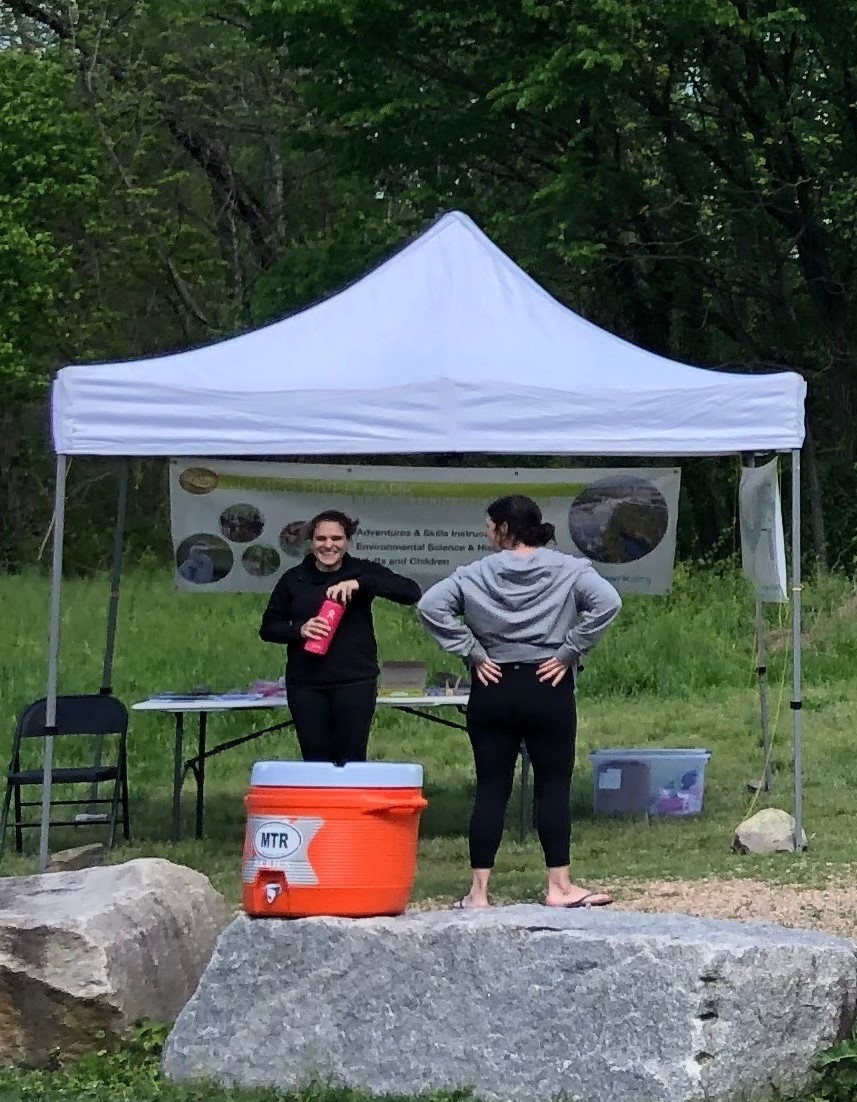 Davenport, an outdoor education supervisor for the James River Park System (JRPS), has caught sight of an approaching family—a mother, a father, grandparents, a little girl, and two very grumpy-looking dogs. The mother starts to explain that they’re just out for a Saturday walk, but the little girl has already scooted inside the tent band begun picking up brochures and instruction sheets from the information table. The mother follows, and before long the entire family is gathered around.

Davenport explains what a bioblitz is—a citizen science event that taps community members to help document the variety of species that can be found in an area, like a giant scavenger hunt using an app called iNaturalist to help identify what they find. Davenport also tells them about the craft tables set up nearby at the Reedy Creek Park entrance and at the JRPS headquarters a little ways down the Buttermilk Trail. The girl’s eyes widen.

Then Davenport shows the young girl a “Junior Scientist Notebook” made for this event, and the girl is hooked. Her blond curls bob up and down as she asks her mother if they can participate. Who could say no to that?

Working in partnership with the VA Department of Conservation and Recreation’s Natural Heritage Program, the James River Park System held its first ever BioBlitz on April 20, 2019. Dozens of volunteers—including ‘walk-ons’ like the family with the dog—collected data and observations that park naturalists will use to assess the species diversity of the park as well as engaging the community and teaching an appreciation for the habitats included in the James River park.

After a short walk along a wide gravel path, I reached the JRPS headquarters. It’s a modest building with exterior bathrooms for park goers, a porch overlooking the river, and a small indoor nature center.

Two craft tables were set up in the shade of the overhanging roof with coloring crafts for young children. Inside there’s an assortment of critters, both dead and alive. Along with the skulls of common creatures and animal identification guides, the building houses a small variety of live reptiles and fish. The wall facing the river is one large window, letting in daylight and offering a view of the stream not too far below. Children scurry around the small building, pointing out animals they see to each other while their parents catch their breath. As more children entered, I decided to go look for some critters myself.

As an older couple passed me on the trail, they noticed that I was filming an eastern tent caterpillar moth (Malacosoma americana) going to town on a blue ash (Fraxinus quadrangulata) leaf. In a gentle tone, the man asked me what I was looking at. Both were armed with binoculars and dressed in warm, muted colors. I pointed at the caterpillar. They slowly nodded in confirmation.

“The birds’ll be happy about that. Good feeding,” commented the old man.

“Are you here for the BioBlitz?” I asked.

The man slowly shook his head. “We’re here to look for birds.”

“Yeah, some prothonotary warblers, cardinals . . . ” He trailed off for a moment, trying to recollect their finds of the day. I asked if they’d seen the red-tailed hawks circling overhead. The woman said they had, and smiled.

I nodded. After a beat of silence, he turned his eyes to the trail behind me.

“Well, we’re going to go look for birds,” he said, and I wished them good luck.

Making my way back to Davenport’s tent, I passed a group of a dozen or so volunteers led by Tyler Twyford, the park’s environmental educator. All of them, young and old, were there to help eradicate invasive plants along the river trail, and they all brandished vine cutters, hand saws, and rakes. One older woman had matching tools strapped to her body like tactical weapons—locked and loaded to wage war against invasive plants.

The group’s attention was momentarily diverted as Twyford pointed out a box turtle sitting in a pond by the side of the trail. Even from a distance, I could see the light in their eyes, all participating and sharing the joy of this small, wonderful discovery. A little further down the path, a mother pointed out a butterfly to her young son, who hollered with delight and began chasing it as it flittered away.

While I did find and document some critters, my biggest takeaway from the BioBlitz were the people who love the James River and the natural wonders it holds. From the staff members coordinating almost daily events in and out of the water, to volunteers wielding tools to wage war against invasive plants, to conservationists working to monitor and protect threatened terrestrial and aquatic species, and so on, the James River and the park around it plays an important role in the lives of both humans and the species that live there. It’s the perfect classroom, filled with natural treasures for people of all ages to enjoy and preserve.