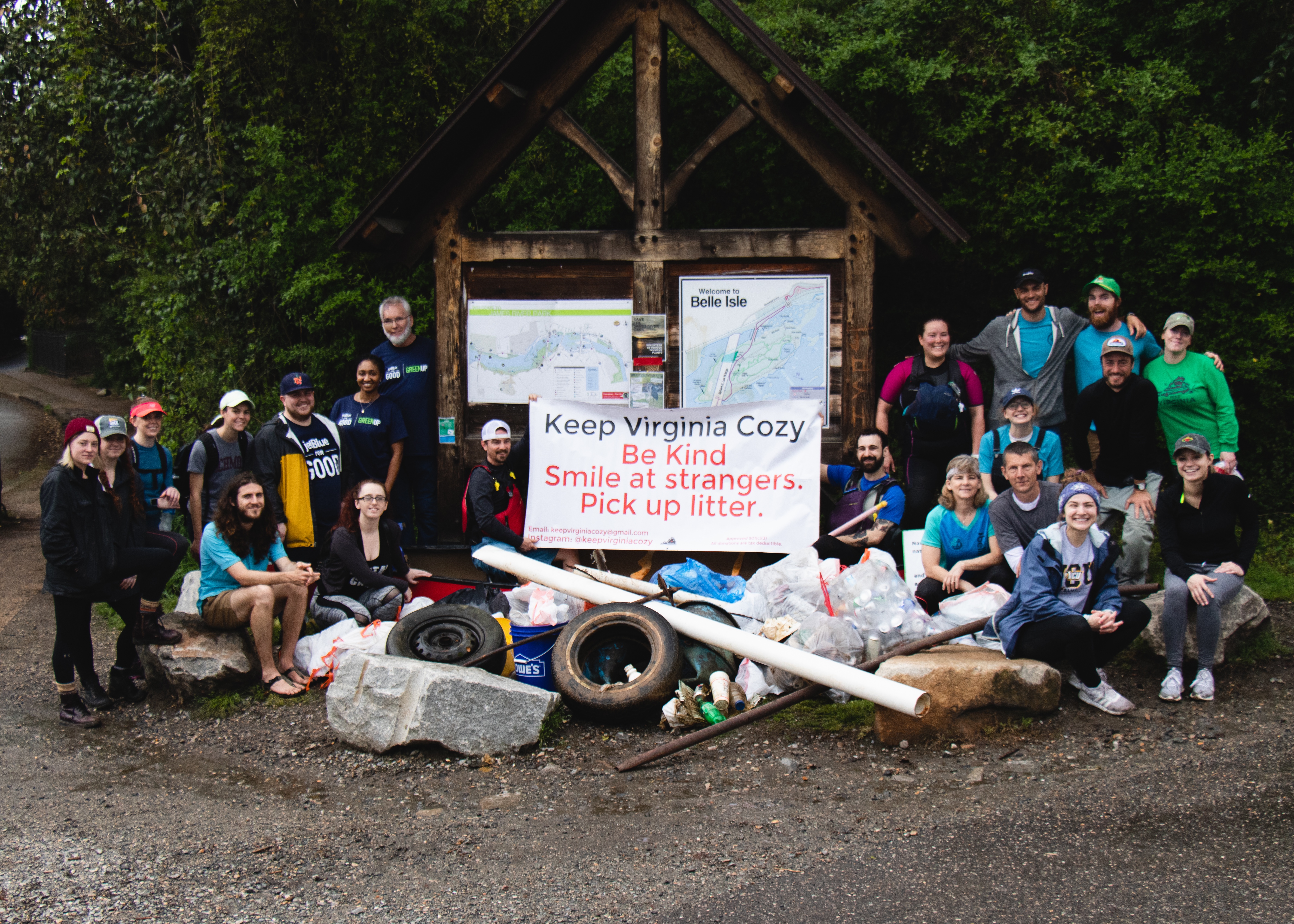 Volunteers with the trash they collected during Keep Virginia Cozy’s second Earth Day cleanup, Plogging on the James, at Belle Isle. (Photo by Lindsay Kagalis)

Blankets are cozy. Raindrops hitting your window pane are cozy. Trudging through the mud on a drizzly Saturday morning picking up beer cans and cigarette butts is decidedly not cozy. Nor are aching back from bending over and sore arms from lugging one bag for recyclables and another for trash. But despite this obvious assessment, 35 volunteers all met at Belle Isle at 9 a.m., giving up a morning at home that had great potential to be cozy, to instead help keep Virginia “cozy.”

Brian Bell founded the volunteer-run nonprofit Keep Virginia Cozy in July 2017, which is dedicated to cleaning up the state. “There was just a need for it,” Bell said. The avid outdoorsman, originally from Staunton, Virginia, had become frustrated by the constant presence of trash in parks throughout the state. Although he had been picking up litter while hiking on his own for years, Bell discovered a niche for a more organized cleanup effort in Richmond. “We have a good community of people who care about the earth, especially the river,” Bell said. 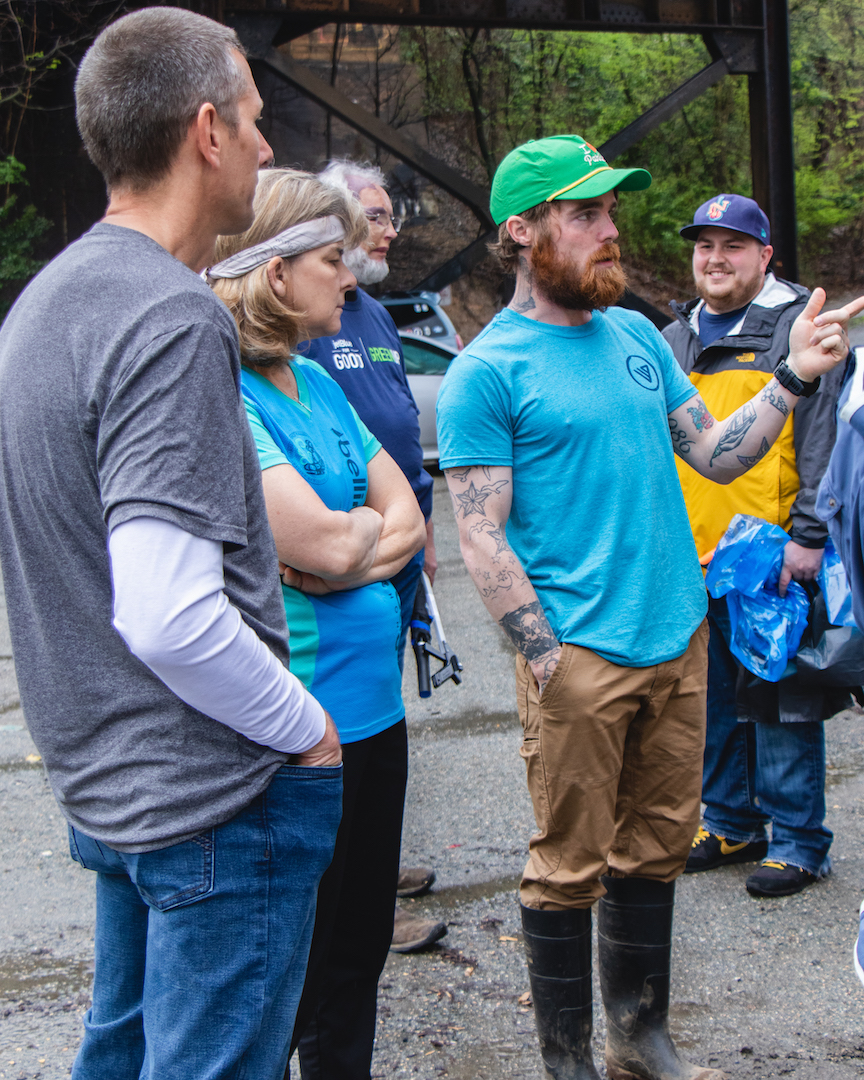 I found this to be particularly true when I joined Bell and his volunteers at their second Earth Day cleanup, Plogging on the James. Plogging, a mash-up of jogging and the Swedish “plocka upp,” meaning to pick up, is Sweden’s latest fitness craze that has slowly gained popularity in the U.S. The group, an assortment of older couples, newlyweds, families, friends, and coworkers, brought together their own small communities and demonstrated the care they have for their city and the river that runs through it. To me, the event seemed more like a family day, a date, an outing with friends, as opposed to a litter cleanup.

After 100 pounds of trash had been collected and canoed back across the river, many of the volunteers reconvened at Väsen Brewing Company to enjoy a free beer and empanadas and continue spending time with each other. The participation was not unusual. “We’ve had thousands of people get involved, either by reposting us on social media or coming out to our cleanups,” said Bell, who received the James River Advisory Council’s Steward of the River Award in 2019. Local businesses, such as Triangle Rock Club and Terrapin Brewery, have also supported Keep Virginia Cozy since its founding, another testament to how much the Richmond community cares about the river, Bell said.

Lindsay Kagalis, a freelance outdoor photographer and writer, attended the cleanup. Although she’s only been in Richmond for six months, Kagalis has found a place in the city’s active outdoors community and in its passion for preserving the parks. She often helps Bell document Keep Virginia Cozy’s efforts and uses her photography to educate and bring awareness about the environment. “Your banana peel is litter. You may not think it is, but it is,” Kagalis said. 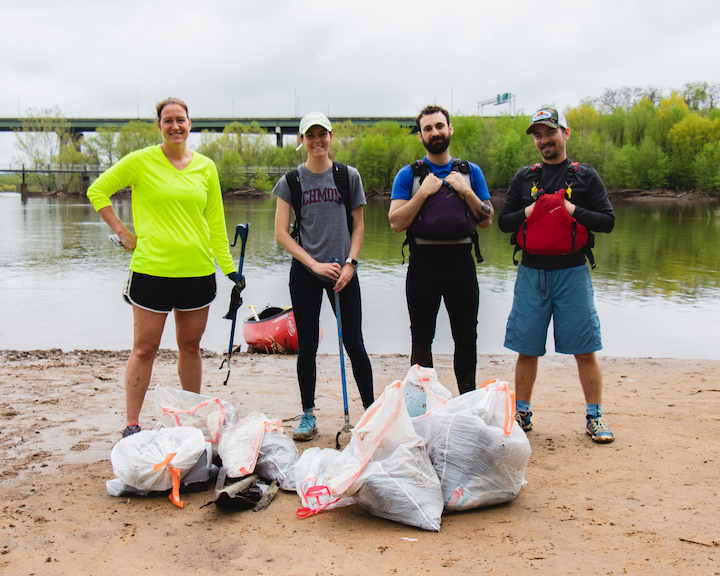 The author (second from left) and other volunteers dropping off collected trash to be canoed back across the river. (Photo by Lindsay Kagalis)

To Bell, the effort to keep Virginia cozy is about making Virginia home. “Clean is good. Like, you don’t want to be by the river and be sitting beside a Bud Light can.” But from what I saw, cleaning up trash isn’t the only thing that keeps Virginia Cozy. It’s the people. The relationships that extend beyond normal Saturday morning activities and do tangible good. Community is cozy.