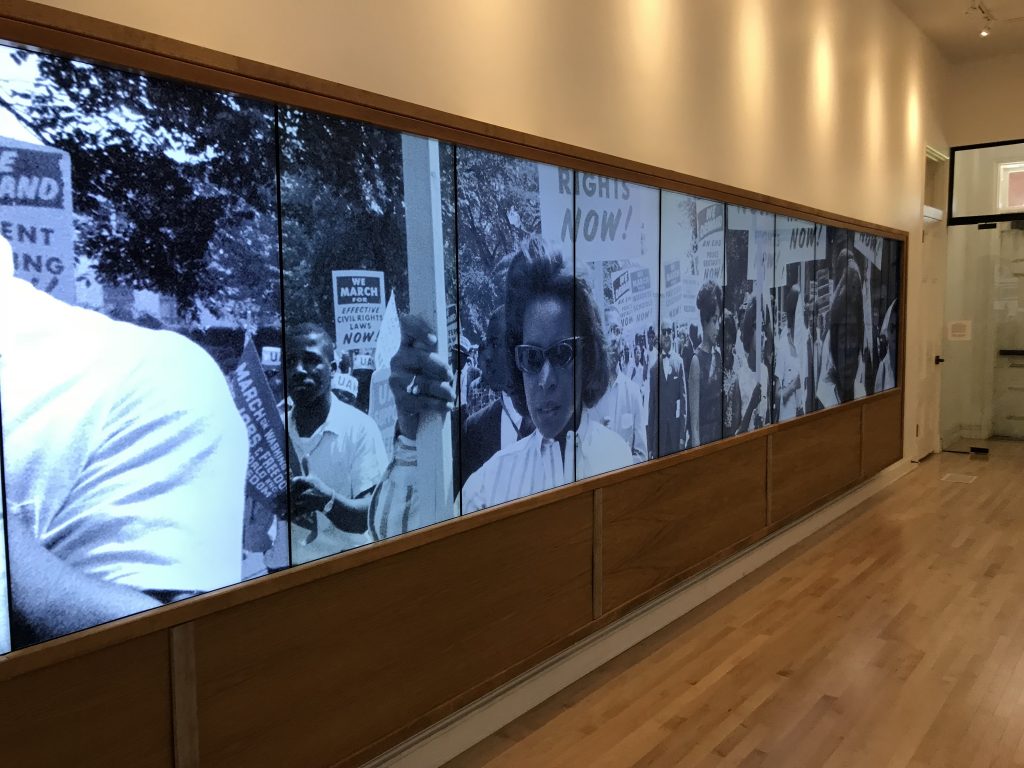 On the first floor of the museum, a hallway-long wall covered by consecutive, interactive screens displays a timeline of black history—mostly in the United States. There were only a few facts regarding Africa and enslaved people from the Americas. As far as United States history goes, the timeline spans from 1619 when the first African enslaved people were brought to the colonies, Virginia specifically, all the way to the inauguration of the US’s first Black president, Barack Obama. Some moments on the timeline, such as the enslaved people arriving in 1619, were highlighted in a blue bullet, which signified an event that occurred in or directly involved the state of Virginia. 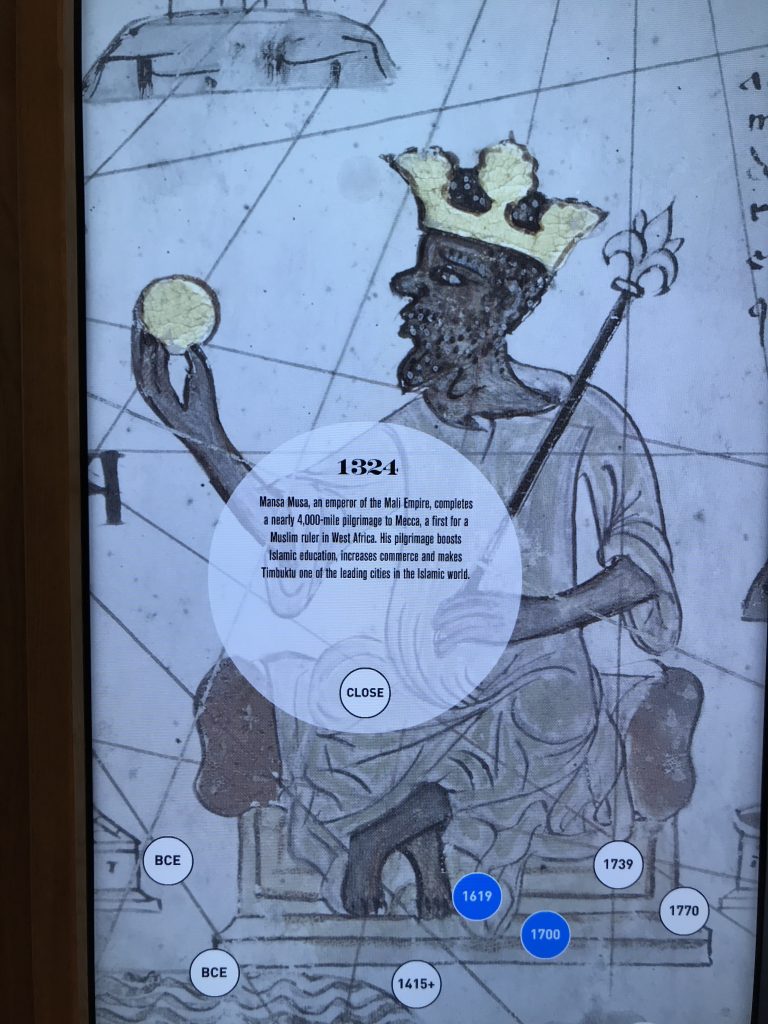 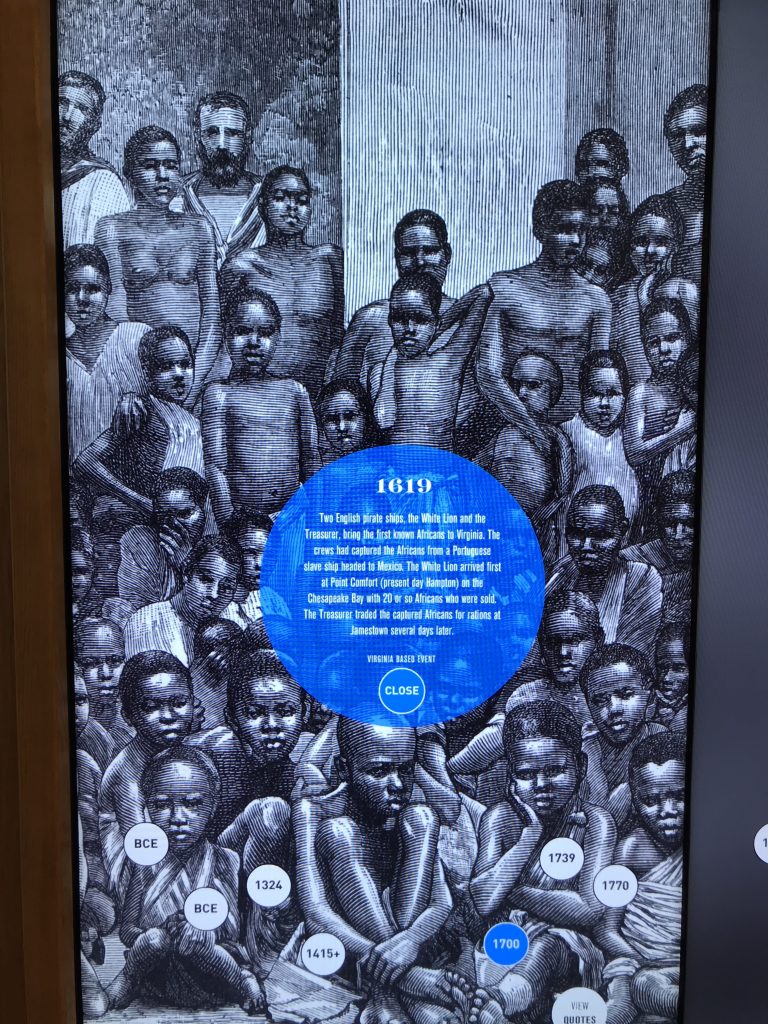 While technically not a named exhibit, I wound up spending most of my time meticulously tapping and reading each and every bullet point along the way. I stopped frequently to take images of those facts I wished to learn more about, found most interesting, or felt were worth talking about in this blog post. “Death or liberty!” the quote by Gabriel (Prosser) read, reminiscent of Patrick Henry’s “Give me liberty, or give me death!” Ironically enough, Henry gave his speech in 1775, just a year before Gabriel was born, and, more commonly known, a year before the United States declared independence from Britain. 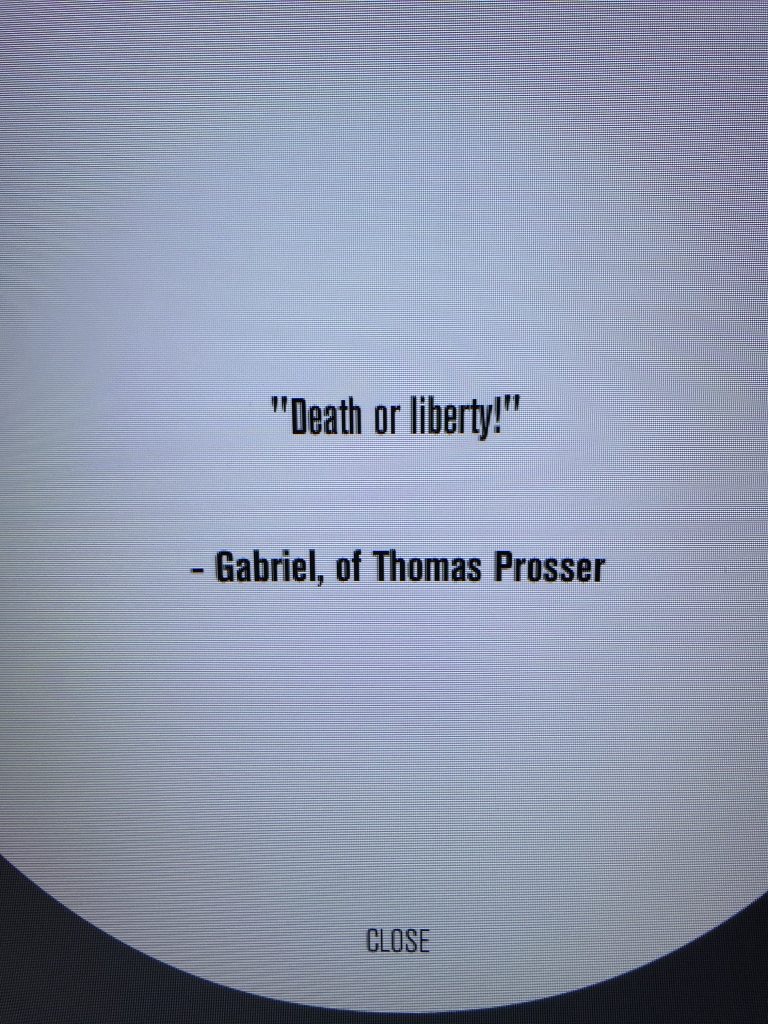 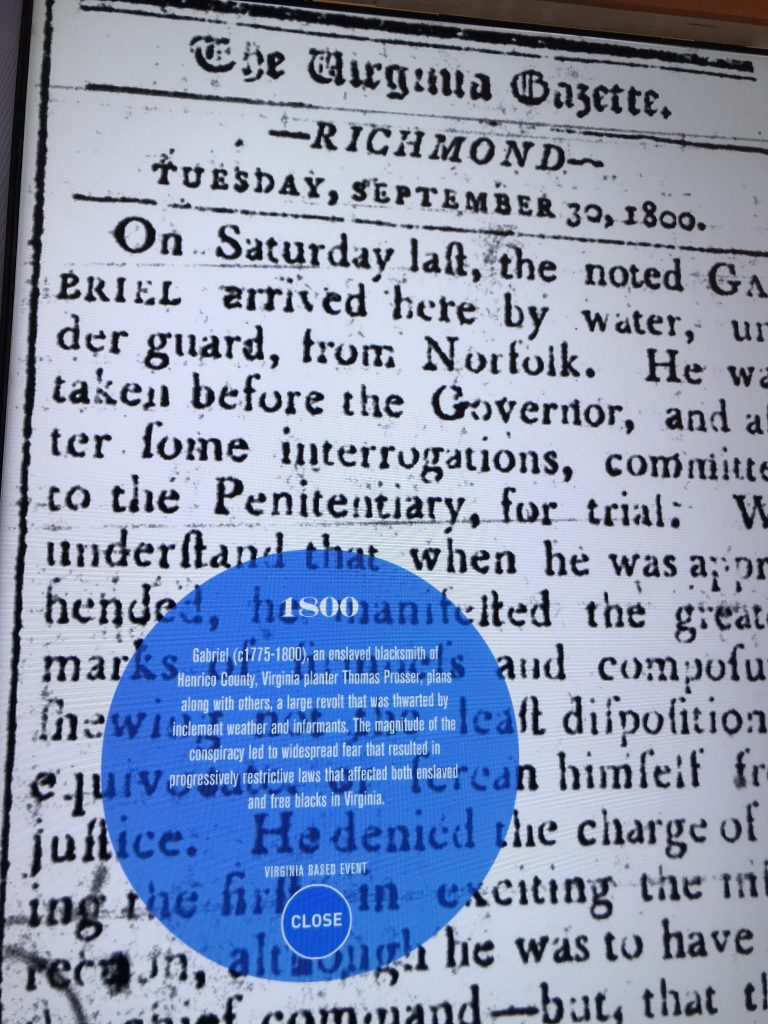 Gabriel’s quote stuck out to me because of the ultimatum—an ultimatum that existed for countless enslaved people in the 18th and 19th century, and still exists for people of color today. Some 50 years later after Gabriel’s rebellion, a woman by the name of Harriet Tubman was risking her life trying to save others on the Underground Railroad. The museum had a quote of hers as well, “You’ll be free or die!”—something she presumably said to those she was trying to assist. Freedom and liberty are two synonyms that anchor the “ideals” of presumed Americanism, yet they do not exist in their entirety for so many including: people of color, immigrants (particularly from Central and South America and the “Middle East”), women, members of the LGBTQ+ community, people practicing religion outside of Christianity (in particular, Islam), the wrongly indicted and incarcerated, and more. The inclusion of Gabriel’s and Tubman’s similar plight along the wall is why I believe the theme—the mantra—of this particular timeline is, “Win freedom or die trying,” hence the title of this blog. After all, as Jackie Robinson once said, “There is not an American in this country until every one of us is free.” 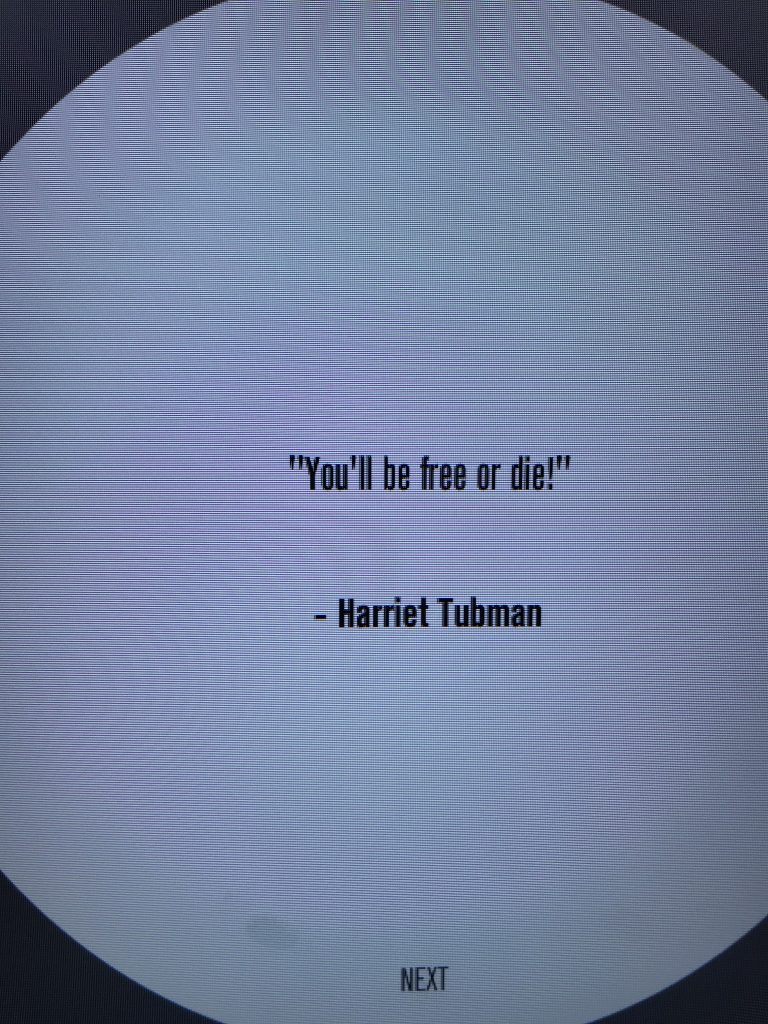 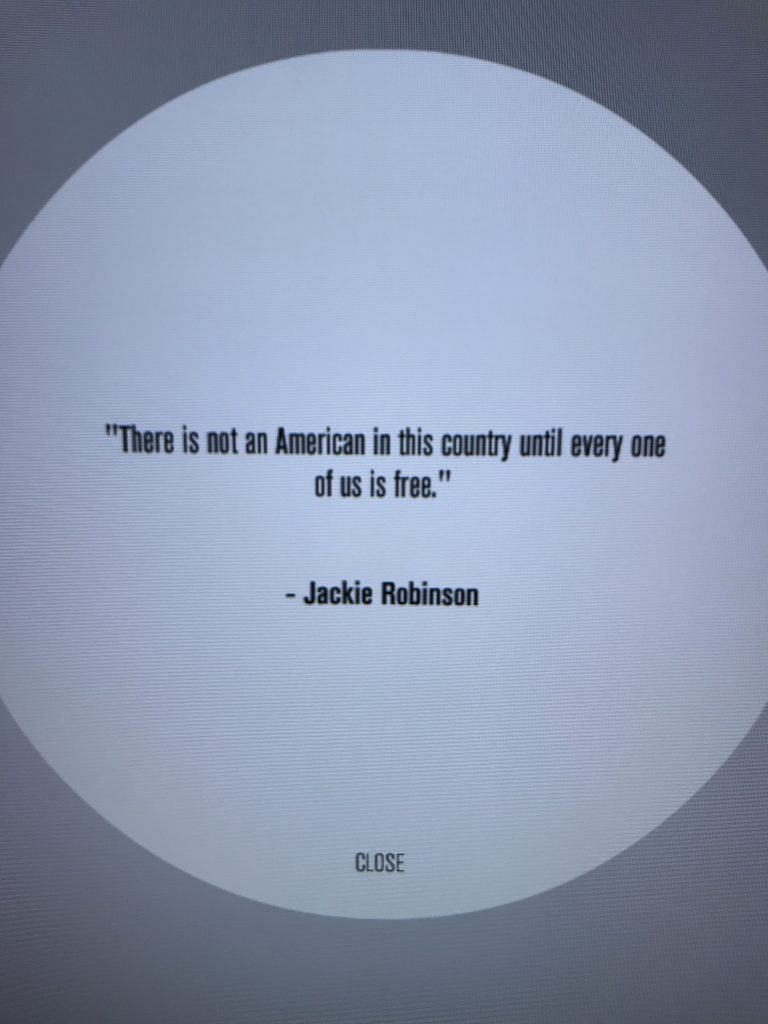 Whether promoting this mantra was the goal of the curators of this timeline or not, I do not know. But I do know that freedom has not yet been won. The timeline serves well in providing facts of key leaders being elected to various offices and positions including Henry L. Marsh III, the first Black mayor of Richmond, and L. Douglas Wilder, the first black governor of Virginia and of any U.S. state. Yet accomplishments such as these still have not equated to freedom and liberty. Moments that seem victorious and that point toward freedom have historically been counteracted. Some plain examples, proponents for change MLK, Malcolm X, JFK, and RFK were all assassinated before they had even begun to scratch the surface. And even though such cruel, physical violence is not the only way progress has been halted (though it too often is), as the saying goes, history repeats itself. 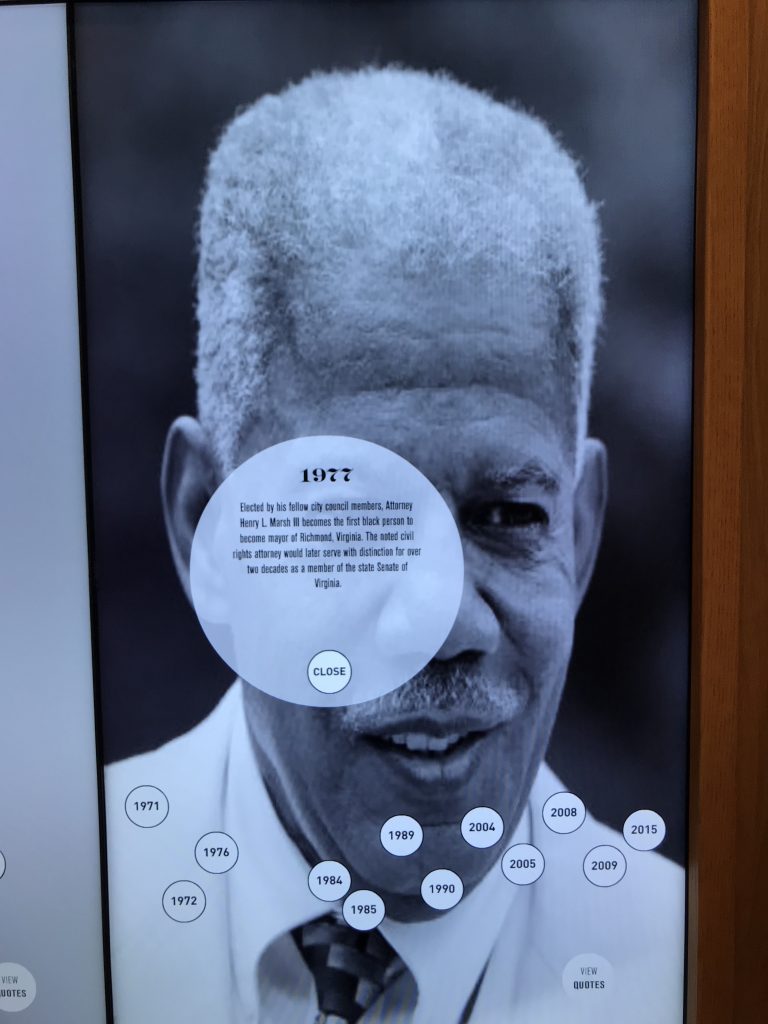 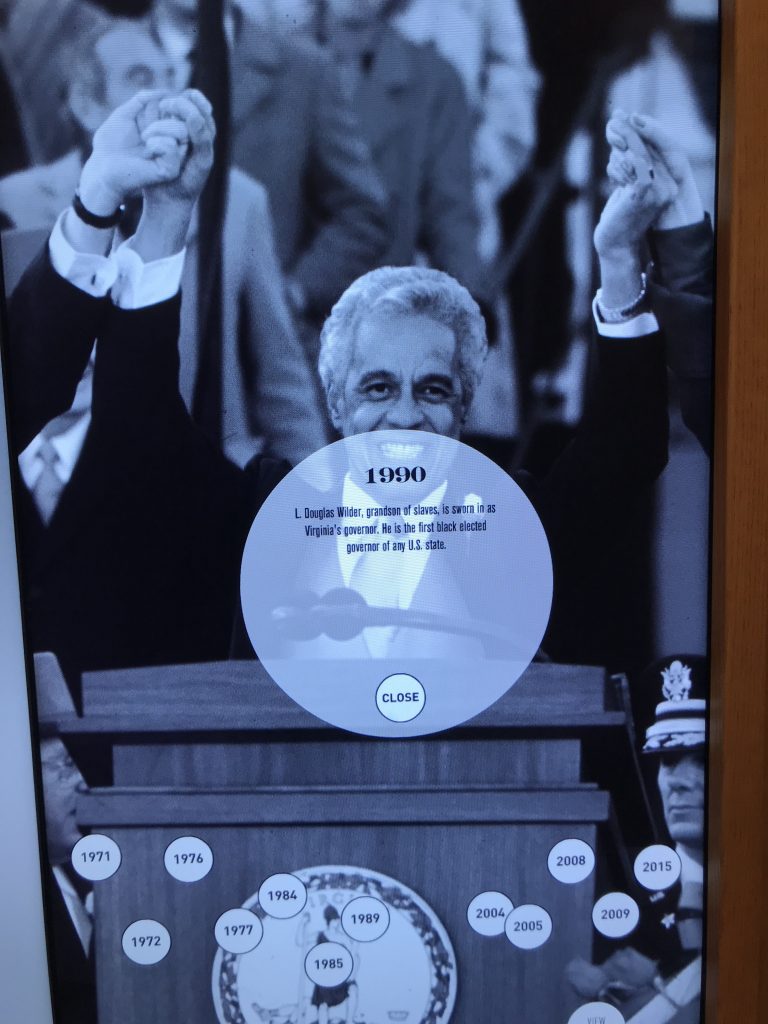 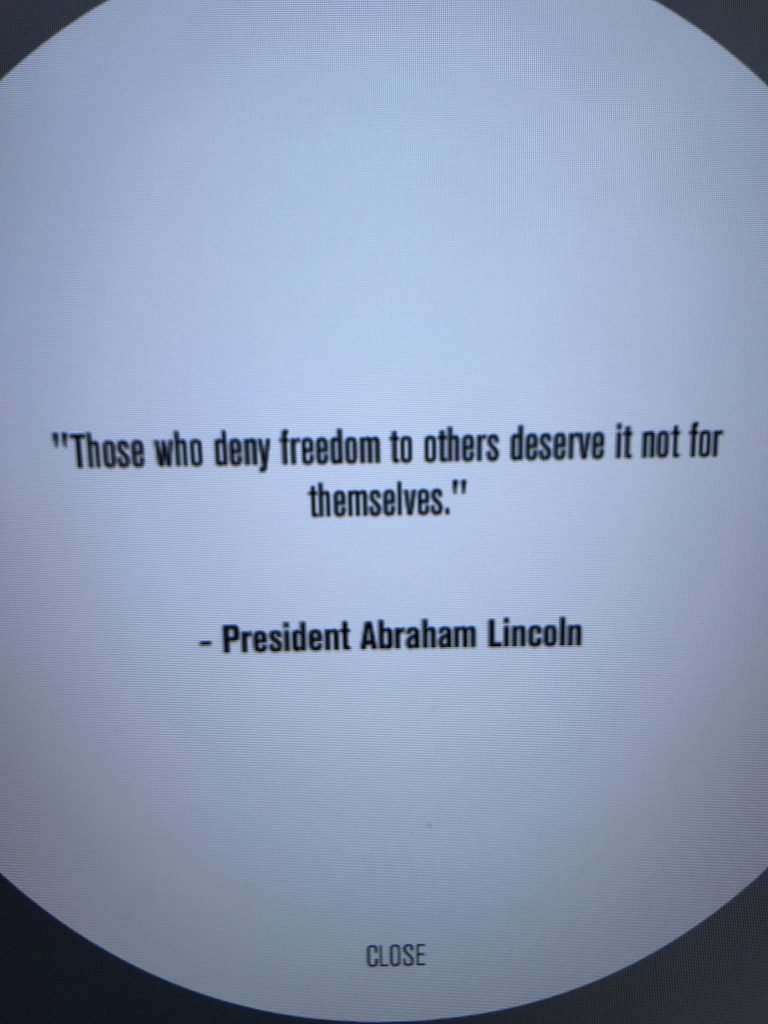 For many, one of the most monumental moments in their lifetime was electing the nation’s first black president, Barack Obama. Alas, what a complete, abrupt, and vicious 180° the US has taken since its electing of Donald Trump. Today we see families being torn apart and separated like during the time of slavery, and we see individuals being kept in internment camps like the time of Japanese Exclusion. Abraham Lincoln was quoted as saying, “Those who deny freedom to others deserve it not for themselves.” But then again, there are some people who still believe Lincoln’s ideals as a Republican of his time match the same ideals of Republicans today… You choose what you believe… Nonetheless, as I said before, history repeats itself; however, this is only so because people refuse to learn. Additionally, it is important to remember that for every action, there is an equal an opposite reaction. We are in a constant state of fluctuation between good and evil, positive and negative. Those before us, those highlighted throughout the timeline and throughout the entire museum, they all were fighting for the good—freedom and liberty. I wonder if perhaps what has been missing all along, what has always been robbed of the oppressed, and what we are still fighting for today is justice. I suppose the only way to find out is to keep fighting, or die trying.