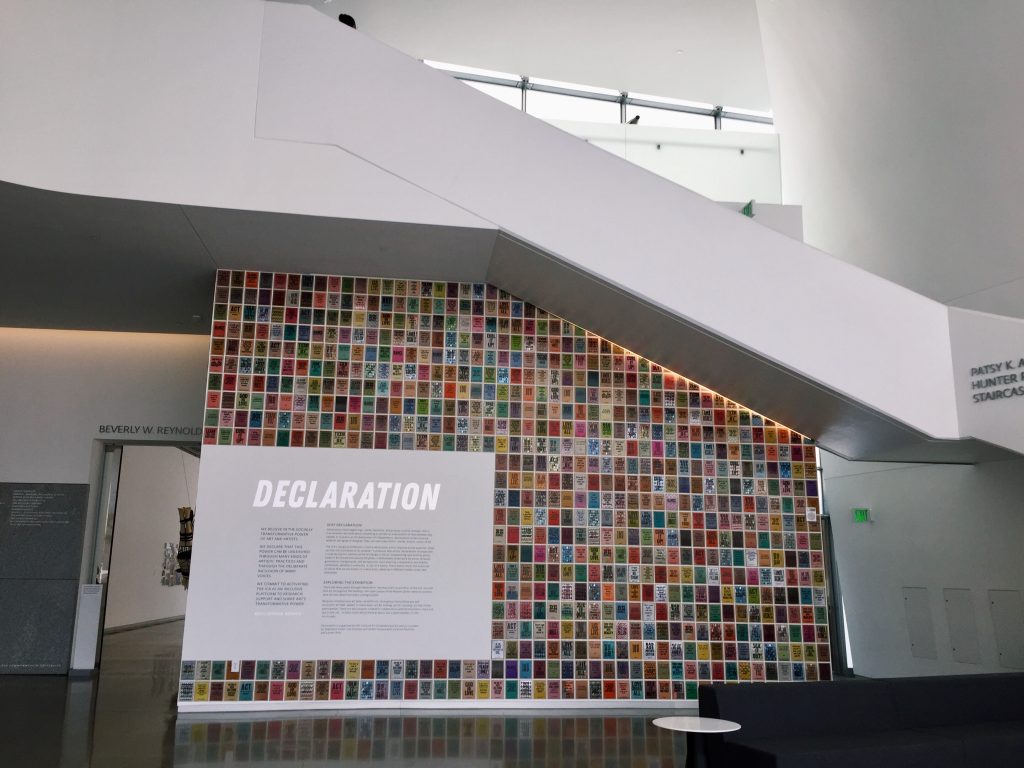 Virginia Commonwealth University’s Institute for Contemporary Art opened its doors to the public in April of 2018. Visitors enter a beautiful, airy architectural masterpiece called the Markel Center. Ranging three floors, the museum’s inaugural exhibit is called “Declaration.” The entrance to the exhibit states, “We believe in the socially transformative power of arts and the arts…Emphasizing new work by artists based in Richmond and around the globe, it deliberately mixes work by artists of varied generations, backgrounds, and perspectives. Such diversity is essential to any healthy community, whether a university, a city, or a nation. These works mirror the multitude of voices that we encounter on a daily basis, speaking in different modes, tones, and intensities.”

The museum is inherently political. Most of the pieces have a message about race, community, women’s rights, mass incarceration, and other modern social justice concerns. Out of the multitude of fascinating pieces, one stood out in particular to me. “Storm in the Time of Shelter” by Paul Rucker, perhaps the most noted piece in the exhibit, features a collection of larger-than-life size klansmen figures dressed in robes of different patterns. Some were tribal African patterns, some were camouflage, amongst others. The figures were arranged in an X-shape with glass cases around them, each one containing artifacts relating to the organization, ideology, or origin of the Ku Klux Klan. As part of the installation, viewers are invited to take home newspapers that explore the entire history of the KKK. By reading the newspaper and engaging with the artwork, I learned more about the KKK than I ever had in any class or previous study. The newspaper walks the reader through the three phases of the Klan. The formation of the Klan in the late 1890s, sought “to curb the education and economic advancement of blacks, as well as the rights of blacks to vote and to keep and bear arms.” By the 1920s and the emergence of the second Klan, they claimed to have 15% of the nation’s eligible members (white men). At this time, the Klan focused on an anti-black, anti-Catholic and anti-Semitic agenda. The third Klan, of the 1950s and 60s, focused on opposing any sort of civil rights legislation. 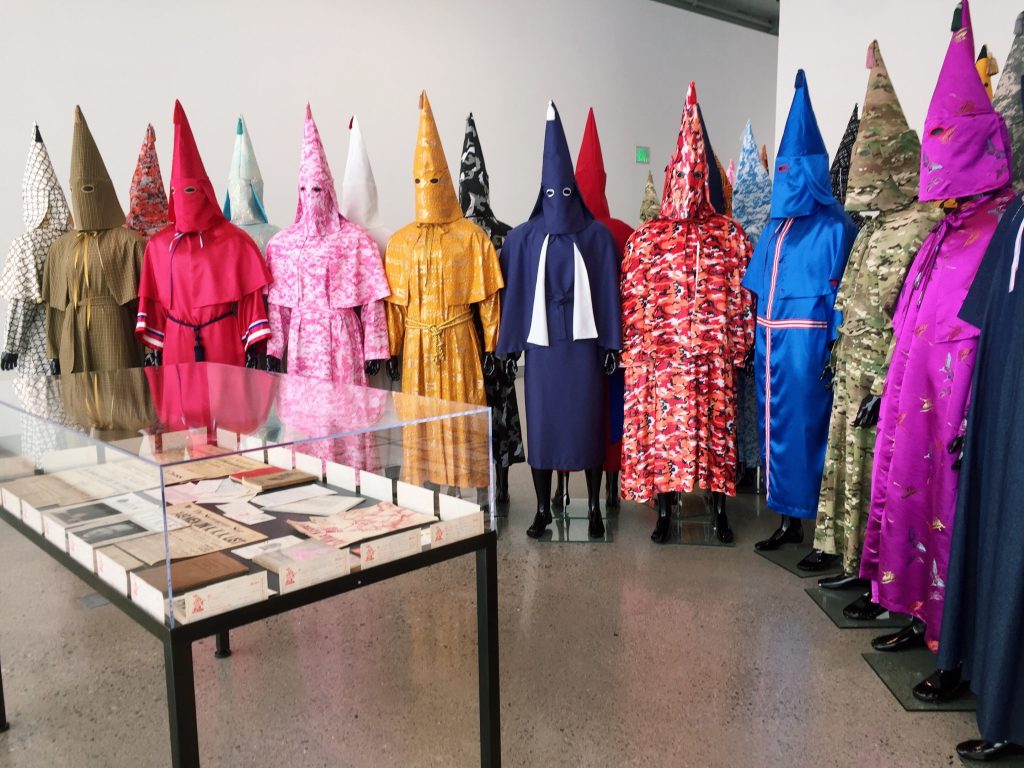 Walking around the exhibit was intimidating. The robes provided the figures an intense and  bone-chilling anonymity. I thought how terrifying it would be to see klansmen in real life. Furthermore, the figures, probably stand around eight feet tall, added another imposing dimension of fear. In an article from the New York Times, the chief curator of the ICA, Stephanie Smith, discusses the symbolism of the piece. She asks, “Does it ‘reflect the ways institutionalized racism has in some cases been camouflaged within our current culture,’…or is it ‘a Judo move neutralizing a symbol of oppression by transforming it into something that is the artist’s own?’”

Slowly, the mood of the installation began to change for me. By featuring the klansmen so prominently out of their context, with no torches, no burning crosses, and no chanting, their presence became less intimidating. Their strength was simply in numbers. It made it clear that the people who compose the Klan are not scary. It’s really when the ideas they harbor come together with enough strength to form a group that can inflict harm on individuals and society. If mainstream society continues to ostracize individual members of the KKK as well as condemn and disrupt their formal organization, their power originating from their fear factor will deteriorate and society will be better equipped to upend their bedrock ideas. It made sense to me why after the Unite the Right protest in Charlottesville, Virginia, there was a push to expose the white nationalists who participated in the protest. The Twitter account @YesYoureRacist published photos of protesters and their names, and in many ways it felt like a public way of dealing with the pain of the protest and trying to incite change. It separated these individuals from their larger intimidating group, stripping them of any anonymity, and exposing their racist ideologies. The art installation was an abstraction of this idea, taking the KKK robed figures, altering their appearance, and putting them into a museum context, to be pondered, rather than feared.

“Declare” was more than a political exhibit. It was a manifestation of protest ideas and roadmaps to resolutions, such as my understanding of Rucker’s installation, whose messages had special importance in the former capital of the Confederacy. I left the space proud to be a Richmonder.