Map of the Week: BridgePark RVA 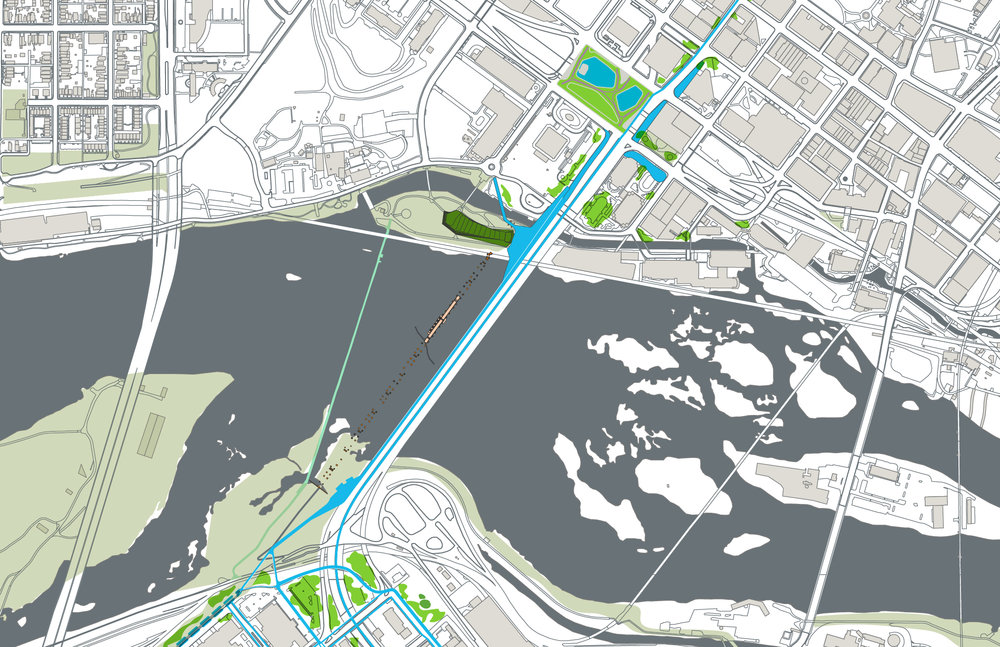 From the former capital of the Confederacy to redlining, the city of Richmond has a tangled past in regard to race relations. In 2012, Ted Elmore, a former partner at Hunton and Williams LLP,  created a project to reimagine the city of Richmond with the introduction of a two-mile bridge park. The nonprofit, BridgePark RVA is seeking to create a two-mile-long pedestrian and cycle urban connectivity greenway. The proposed greenway is being constructed in hopes of connecting the south and north side of the city. On either side of the bridge, the nonprofit is seeking to repurpose barren and unoccupied oversized vehicle spaces into active green spaces. Hopefully, these spaces will be utilized by all community members as places of gathering, learning, and relaxing. At the center of the project is the hope that communities will be reconnected to the city center, which was taken away from them due to a series of urbanization policies passed in the mid 20th century. In the 1950s legislators in Richmond passed a freeway construction plan that ripped through the predominantly black neighborhood of Jackson Ward. Homes, businesses, and churches were destroyed as the construction of Interstate 95 demolished everything in its path, which happened to be the center of a thriving black community at the time. It also displaced 10 percent of the black population in Richmond. Meanwhile, the interstate served white communities as it transported people to the predominantly white suburbs.

Another legislation that came out of urbanization was redlining, which was the practice of refusing a loan or insurance to someone because they lived in an area deemed to be a poor financial risk. In the city of Richmond, it was no coincidence that predominantly black neighborhoods were redlined because of the belief by banks that such neighborhoods were “hazardous”. This institutionalized racism caused a divide in the city as neighborhoods were extremely segregated, consequently segregating the schools as well. Due to the impacts of redlining and other legislation in the city of Richmond, the south side of the city is disproportionately black. If you traverse across the river to a neighborhood on the south side, the life expectancy decreases significantly (Hayter).

Since 2012, BridgePark RVA has been attempting to fix the institutional problems in the city of Richmond by working with an experienced team to identify solutions. The board of directors is led by Ted Elmore and consists of community leaders, artists, activists, and innovators. Additionally, the project has been involved in community engagement, gaining the perspectives of all sorts of people who live in Richmond. A 28-foot long model was created and shown in 21 different locations across the city. Several schools and students have worked with the team as well as more than 30 city departments and community organizations in an effort to have all voices heard, which did not happen in the mid 20th century (BridgePark).

The map that I chose for my “Mappenstance” blog project is the official map on the BridgePark RVA website outlining the proposed plan for the project. There is no title on the map, nor are there any legends to give great detail. The map itself is fairly basic as it serves to illustrate the massive area of land that it hopes to convert into a green space which is marked by a sort of blue gradient. I think that this color choice is very interesting as I would’ve imagined utilizing green to associate with the greenspace that the project aims to create. Spatially, I think that the map does an excellent job at setting up the river in the dead center because it emphasizes the divide that needs to be fixed. However, I do think that choosing a stronger or brighter color to represent the Bridge Park plans would help to highlight how the project can connect the community in a more effective way. Additionally, I also think that it was unique how barebones of a map this is for such a massive project. The map leaves me with more unanswered questions than I arrived with, which I also think could be a ploy for community engagement so that people ask the questions of how it is going to work or what it will look like. However, for a nonprofit organization with such a large task at hand, I think that this is a very risky move to make.

There are also many silences within the map that are not necessarily addressed (Harley). For example, the context that I mentioned previously surrounding the city of Richmond is crucial to understanding why the project needs to happen, yet there is no hint of this. While this case is very fascinating, a lack of context is not unique to mapping in general. Maps like this remind us of how crucial context is to see the map from a different perspective. I think that an interactive map would be incredibly effective at identifying the problems and solutions in one place. For example, the map could be layered with a redlined map of Richmond and a map of Richmond’s economic breakdown by neighborhood today. This way, the map becomes sort of a counter-map that challenges the state legislation that shaped the city. Instead of allowing the state legislature to dictate what the city currently looks like, the map has the ability to use this to its advantage by taking the information and directing it in a positive direction that reimagines the city of Richmond.

HAYTER, JULIAN MAXWELL. Dream Is Lost: Voting Rights and the Politics of Race in Richmond, Virginia. UNIV PR OF KENTUCKY, 2019.

1 Response to Map of the Week: BridgePark RVA