Map of the Week: Spending Per Student, By School District – Our Tax Dollars & Education 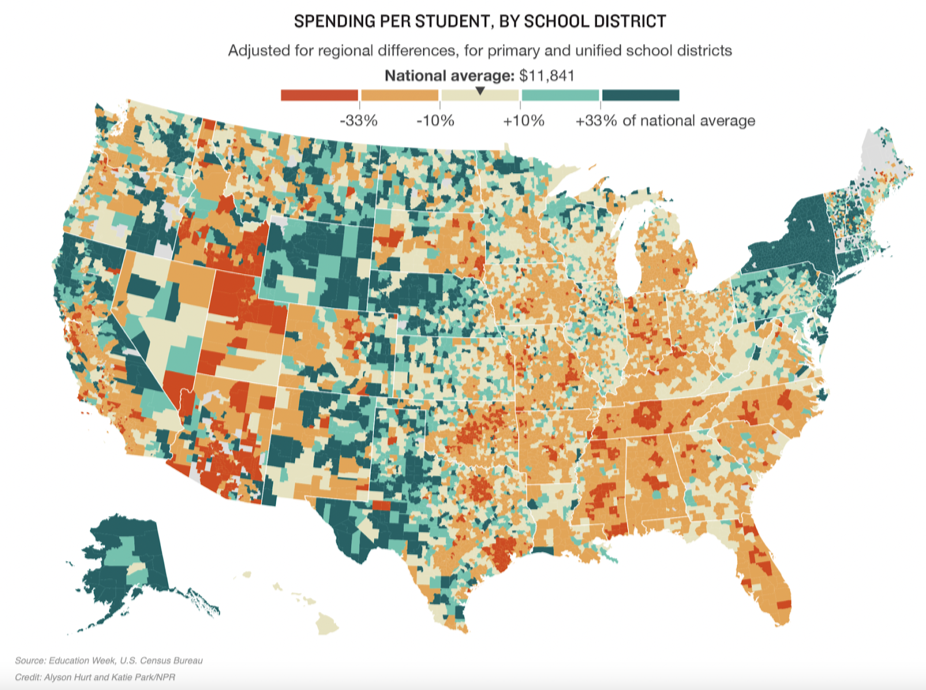 Have you ever thought about where your tax dollars are going? How are they making a difference? Are they making a difference? This map, “Spending Per Student, By School District,” published by the National Public Radio organization, encapsulates the great divide that exists within the United States surrounding education. More specifically, the map deals with the spending inequalities between different school districts on a national scale, while it is typically addressed on just the state by state level. In calling attention to this national disparity, the creators of this map are speaking to an issue that is often overlooked and silenced, but in reality is much worse than many people could imagine. This map exposes school districts nationwide for using seemingly unfair practices when it comes to the distribution of money and resources, and highlights areas that take advantage of poor districts and communities in their handling of funds. Many other maps, such as one’s published by EdBuild, a company established to bring sense to the ways in which states fund public schools, follow suit.

While researching the details of this map and various other ones that present similar information, I discovered that funding inequality nationally is worse overall than even the most unequal state in the U.S, which really puzzled me. How could the total disparity across 50 states be worse than an individual one? And the most unequal one? To answer that question, Rebecca Sibilia, EdBuild’s CEO and founder, explains that, “In states that do have a high number of students in concentrated poverty… they’re funding all education at a lower level than states that have a lesser number of students in concentrated poverty (Barnum).” So essentially, it comes down to the amount of money that our country dedicates to education being simply too little, which I’m sure most of the population is already aware of, yet the degree and scale of inequality may not be fully appreciated. From there, we are able to see the breakdown of the ways in which different states use their money and how they distribute it based on a variety of factors. So, while the amount of money awarded to schools on a national level is important to take into consideration when talking about inequalities, it ultimately depends on the state-level.

In analyzing the map that I chose for this week’s blog, I realized that a great deal of Southeastern states seemed to be spending below the national average per student in most of their school districts, compared to more central states that seemed to be spending above the average. Despite these trends, there are definitely districts in both of these areas that are outliers, spending a great deal more or less than the average, but for the most part these different parts of the U.S seem to be drastically different in terms of educational spending measures. After doing some more research, I began to understand that the big determinant of how much money is allotted to a public school correlates to the property tax within that area. Which kind of makes sense, right? Because public schools are zoned, which means that the people living near the school are the ones who will be attending the schools. But, this brings up a dilemma. By basing the funding of the public schools on local property taxes, that automatically determines that certain districts will have more money than others because the value of properties varies from neighborhood to neighborhood, and with that comes tax revenues. So, while this may seem like a sensical way to allot money to these public schools, it presents an inequality right from the get go.

It would be interesting to analyze the same map but of racial demographics, and observe whether or not a pattern is in place where traditionally marginalized groups fall into these areas with lower tax revenue and thus less money for their school districts. We already know there is a major achievement gap within education, largely due to institutional racism, because of systems exactly like this. Majority minority school districts are receiving less funding, and in turn, those students receive fewer resources, experience more teacher turnover, and go to school in uncomfortable and sometimes unsafe conditions.

To patch this inequality, some school districts have taken the authority in compensating for that imbalance by providing more funding to certain schools. But, according to Tramene Maye, the principal of Livingston Junior High School in rural western Alabama, this compensation is not the norm. And, most of the nation’s superintendents and principals will tell you that whether they can afford a year-round art teacher or new textbooks depends at least in part on the property wealth around them (Turner et al.). So ultimately, there is no quick fix for this nationwide spending dilemma over education, and rather it might need to be approached on a district by district level, as the current system works fine for some parents who live in districts that can spend lavishly in educating their children while others can’t.

In analyzing this map and researching the background of educational funding nationwide, I found many silences. My sister is currently in the process of receiving her masters in education from The University of Virginia, and deals with the issues brought about by a lack of funding on a daily basis. After speaking with her about things such as where the materials she uses to decorate her classroom or the interactive materials she uses to teach her students comes from, I began to find cracks in the funding system. She informed me that many teachers spend their own, hard earned, money on things like markers, paper, classroom decorations, etc., which led me to question whether or not this map took that into account. I don’t think it does. Also, I thought about my own time in a city public school for elementary school and middle school and remembered organizations like the Parents Association (PTA) and other clubs that raised money for a variety of different things. While I understand that this map is speaking directly to the issue of national funding and it would be impossible to gauge the amount of volunteer work and teacher money that adds to the money a school has, I think that this became a silence within the map. I also think that the spatialization of education disparities speaks to an even larger issue that deals more with qualms of race, ethnicity, crime, poverty, and other environmental factors, based on location. It’s evident based on the map that areas dealing with the most disparities are those of lesser opportunity and privilege, which leads me to believe there is a follow up article and map to this one.

Worse Nationally than You Think.” The 74 New Map School Funding Inequality Often Measured By State Is Far Worse Nationally Than You Think Comments, 22 May 2016, https://www.the74million.org/article/new-map-school-funding-inequality-often-measured-by-state-is-far-worse-nationally-than-you-think/.

1 Response to Map of the Week: Spending Per Student, By School District – Our Tax Dollars & Education