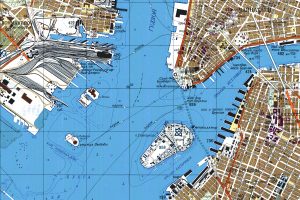 During the cold war, the Soviet Union’s Military secretly mapped the world with such precision, that in certain areas, it would appear they were preparing for an invasion. In total, the Soviet Union created more than 1.1 million different maps some of which date back to the 1980s. Some places on the maps detail the dimensions of buildings and roads, going as far as to include bus stops. The extreme accuracy given to this collection of maps created a whirlwind of assumptions. Were they getting ready to attack, rolling their tanks through our city streets or was this merely precaution due to feeling threatened? The Soviets’ intentions with this mapping gets particularly questionable when looking at the precision as well as its covert goal. In red ink, on the top right of every map you can find “секрет”, the Russian word for secret. This map has several different aspects to inspect: The visual component, the historical context and the possible interpretations of its purpose.

In terms of the visual component, the use of a variety of vibrant colors and defined lines allow the viewer to process the area with clarity, an element that many maps do not achieve. It lays out the grid pattern of New York City and the many ways to cross the water. To some scholars, the practicality of these maps suggests plans to someday be in charge of that area. Others give Russia the benefit of the doubt and say that it was their way of gathering intelligence. Another important visual component is that they had multiple maps for certain locations with varying scale. Therefore, depending on which map you are looking at you would see different details and highlighted areas. This element tells you about the care they went through while producing these. They spent the time and effort to map places not one or twice but three times in locations like New York City.

The most prevalent source about this discovery of maps is the full exposition made by Greg Miller at Wired. “The maps are still a taboo topic in Russia today, so it’s impossible to know for sure, but what they’re finding suggests that the Soviet military maps were far more than an invasion plan. Rather, they were a framework for organizing much of what the Soviets knew about the world, almost like a mashup of Google Maps and Wikipedia, built from paper”. This quote is an example of how uncertain and possibly harmless or deadly the maps could be. Re-starting tensions between Russia and the United States is the last thing anyone wants but exploring the idea of a USSR plan to attack New York City or any other highly mapped area can allow us to create many conflicting narratives about how history could have gone. One thing that can be certain from these maps is that the Soviet Union, and more specifically their military, wanted to have a compendium of knowledge of what basically is the whole world’s geography. It reveals that they prioritized scientific cartography and were willing to expend great resources to have this knowledge. This knowledge could have been used in multiple ways but both lead to the soviet union having power. Either they can attack because they have what is almost like a satellite view of the world or they do not attack but they are able to flaunt their information over us, which could have also led to more conflict. After considering multiple approaches, I believe that this collection of maps is an example of how seriously the Soviet Union and the United States took each other’s threats.

This map connects to many themes we have discussed but can be clearly connected to the ideas proposed by Harley. More specifically the concept of maps having material consequences as well as how “The single stroke of a pen can determine the lives and deaths of millions.” If these maps were found during the cold war they could have easily been the end of a proxy war and nuclear battle. Those very detailed strokes on a map could have greatly upset the United States and other anti-communist countries. The Soviet Union’s mapping of the world and the different interpretations prove the immense material and ideological power of maps.

This entry was posted in Maps of the Week and tagged Map of the Week. Bookmark the permalink.

2 Responses to Map of the Week