Posted on November 2, 2021 by Bridget Boland 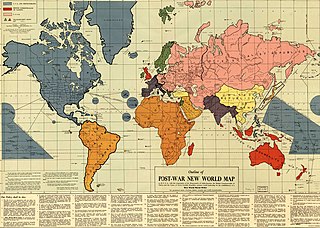 Was Maurice Gomberg an insightful political cartographer or was he just crazy?

America in 1941 was filled with uncertainties. With an ongoing world war, the American public was wondering what the future might bring. Maurice Gomberg took the unpredictability of the times into his own hands and created the “Post-War New World Map” which was a personal project but gained public attention nevertheless. This map was a culmination of predictions of how the world be, and his own beliefs on how the world should be after the war.

Surprisingly Gomberg originally created this map in 1941 and self-published it in 1942. In 1941 the U.S. had not officially entered WWII yet and the Japanese attack on Pearl Harbor had not occurred. During this time the world was descending into chaos. Nazi Germany had achieved several key victories and taken control over many nations in Europe. The fascist dictator of Italy, Mussolini, had allied himself with Adolf Hitler and their German and Italian armies were expanding into Northern Africa and the Middle East. In Asia, Japan, which was allied with Nazi Germany in 1940, was already in the midst of an invasion of China and was beginning to turn their attention southward. The Axis powers (Germany, Italy, and Japan) were quickly expanding their power and control in the world and the U.S. public was becoming increasingly more worried. The U.S. had maintained a foreign policy of isolationism post WWI as a result of the atrocities that occurred in WWI and the lasting effects of the great depression. Isolationism was still prevalent in 1941 and public opinion was not in favor of the U.S joining the war. Franklin D. Roosevelt, the president at the time recognized the inevitably of U.S. involvement and in an effort to sway the American public made his famous “Four Freedoms Speech”. He promoted his “Lend-Lease” program, which financially aided Allied powers without directly joining the war. He also outlined four essential freedoms: freedom of speech, freedom of worship, freedom from want, and freedom from fear. He framed it as America’s moral obligation to ensure these freedoms everywhere in the world.

Franklin D. Roosevelt’s “Four Freedom Speech” was highly influential in Gomberg’s depiction of the world post WWII. Towards the bottom of the map Gomberg includes quotes from the speech and he outlines 41 policies he believes are necessary to achieve peace, freedom, justice, and security. He describes a “New Moral Order” that would be brought through the emerging three superpowers: U.S, USSR, and the British Commonwealth. He positions the U.S at the center, having them become the moral police and leader of the new world. “For reasons of history, economic structure, favorable geography and the welfare of mankind, the U.S.A. must, altruistically, assume the leadership of the newly established, democratic world order” (Gomberg). In this new democratic world order, Gomberg stresses the importance that the U.S have superior military, naval, and air power, with a close second and third being the British Commonwealth, and the USSR respectively. This is so the U.S., along with the other two superpowers, can prevent the next catastrophic world war. The U.S. and the British Commonwealth also have “peace-security bases” throughout the world to expand their control and ensure peace. In Gomberg’s new world all natural resources would be divided equally worldwide, and a league of Nationalities would be created with the U.S. spearheading it all.

Gomberg uses his map to solve some of the biggest and most complex political and social issues of the 20th century. The choices he makes are extremely political, and frankly insane, like combining a whole continent into a singular union. He ignores the numerous individual nations already established and the obvious cultural differences and groups them together. Gomberg’s map presents how he wants the world to be as fact, redrawing borders and unions according to his preferences, despite the political and social conflicts present. His favoritism of the United States, the British Commonwealth, and the USSR is shamelessly apparent and disrespectful to the many other nations whose role in Gomberg’s world is essentially unimportant. Through his bold and dangerous choices, he uses the power of maps to tell the story of his ideal world post WWII.

The actions Gomberg proposes the U.S. and other new world leaders take eerily mimic the same Imperialistic behavior that Gomberg denounced and blamed in his second policy for the war. Gomberg’s new world has the U.S., USSR, and the British Commonwealth, but especially the U.S., extend their power, influence, and authority over the rest of the world in order to maintain peace. This theoretical scenario after the war is incredibly biased towards the Allied Powers and especially the U.S. The quarantined nations of Germany, Italy, and Japan are singled out in black outlines and there are several policies detailing the discrimination the people of these countries will face. Gomberg’s world chooses to punish the people of the Axis powers just as harshly as the governments and individuals personally responsible, which is a lucrative and cruel decision Gomberg made for his map. The U.S. is given control over the entire North American continent and its individual states are shown on the map. The USSR also has detailed individual regions listed within its borders while many of the other nations only list their national borders and major cities. Given Gomberg’s supposed hatred for imperialism and based on the imperialistic-like characteristics and powers he is attributing to his new world’s leaders, it’s possible that the map is satire. This map could also be considered highly propagandistic, painting the United States and Allied Powers and the moral saviors of the world and calling for a new world order through Franklin D. Roosevelt’s sentiments in the “Four Freedoms Speech.” While Gomberg’s map of the world post WWII is certainly bold and provocative, his reorganization of borders and creation of multinational unions is a jarring image compared to what we know the world to be today. This, combined with his American centered policies listed below form an incredibly biased and bizarre representation of what he thought the world could become if the U.S. joined the war.

1 Response to Map of the Week