Map Of The Week 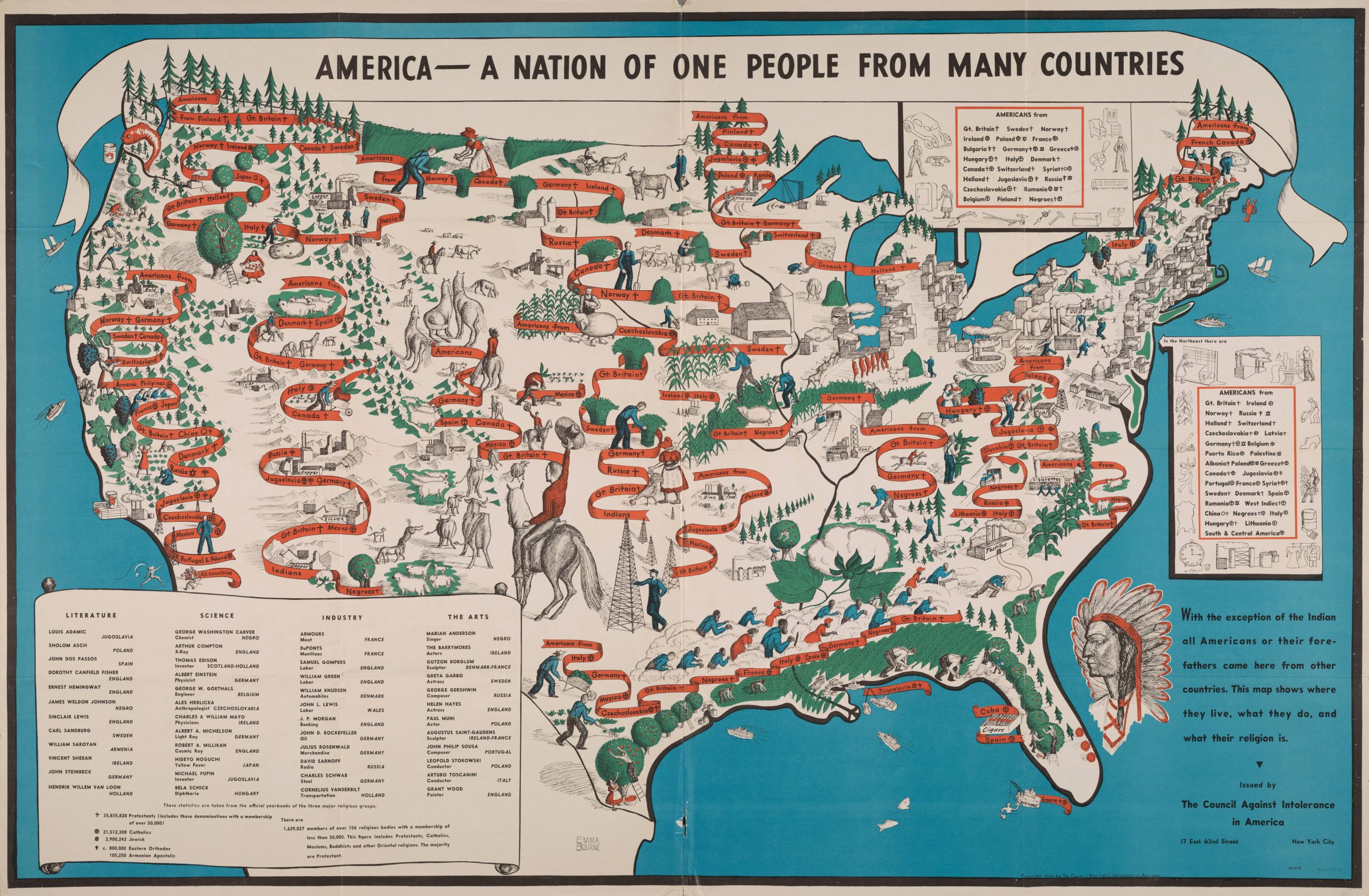 For as long as it has been around, the United States has presented itself as a melting  pot, seemingly offering refuge for those fleeing violence, freedom for those being oppressed, or simply a blank slate for those who wish for a new start. The very essence of the mythic American dream is that anyone from any background can come here and thrive. However in the early twentieth century, this concept was challenged by a growing hatred and distrust of  foreigners in response to the sudden influx of immigrants entering the country. Many believed the American population was straying too far away from the “ideal mix”. These anti-immigrant and nationalist sentiments deepened even further in the years leading up to the Second World War, which brings us to the creation of this map. “America – A Nation Of One People From Many Countries” was created by Emma Bourne in 1940 after being commissioned by the Council Against Intolerance in America. While limited information is available on Bourne, the Council Against Intolerance in America emerged during this time to help unify the changing nation. The council’s intention to “promote tolerance through education” and to “counteract the propaganda of racial and religious prejudice which seeks to divide America” is clearly evident in this map.

One of the more noticeable and superficial characteristics of the map is its artistic nature. Instead of the scientific symbols and typonyms that are typically plastered across cartographic works, this map has a more illustrative storytelling approach to American geography. Bourne uses popular imagery to convey the culture of different areas across the country such as the growing manufacturing industry in the North East or the plantations along gulf in the south. The figures in which the map is centered around are also all portrayed in action, giving the map a dynamic look, as if it is capturing the American nation in a moment in time. To add to the artistic nature of the map, Bourne also places boats along the nation’s coasts to imply that there is a constant buzz surrounding the country. Whether it’s more people coming to embark on their “American dream” or a freight ship hauling in another load of imports from a trusted business ally, these drawings allow viewers to imagine and expand on the already present story.

While distinctive, the artistic style is only one portion of this map. As mentioned above, this map was commissioned by The Council Against Intolerance in America with the intent to combat rising anti-immigrant opinions and unite the country during these war-ridden years. Bourne achieves this sense of togetherness in two different ways, most noticeably through the absence of state borders. Through the omission of these boundaries as well as any additional spatial indications such as city names, the country as a whole becomes much more connected, as it flows from one coast to the other without interruption. The use of the prominent red ribbon throughout the map also helps achieve this feeling of harmony as it winds between different enthic and cultural groups, joining them together as it goes.

Most importantly, however, this map was used as a way to convince the American public of the importance of immigrants to the country. The main way Bourne does this is by showing their significant role in the American economy.  From Polish people serving in the coal industry in New York, to Germans plowing fields in North Dakota, to Armenians working in Californian vineyards, this map highlights how much the U.S. relies on immigrants to keep its economy moving. At a time in which it seemed all other sources of stability were gone, the reassurance of a reliable and even prosperous economy was undeniably comforting. When viewing this map, Americans had no choice but to feel some sense of gratitude towards these immigrant populations.

Beyond the economic argument this map makes in favor of the country’s minority groups, there are also important intellectual and cultural supporting points. Instead of the typical legends that contain information such as symbol meanings and scale information, this map contains a key with information regarding famous non-Americans and their achievements. Sorted into four categories: Literature, Science, Industry, and The Arts, this legend argues the widespread knowledge and progress that such immigrants can and already have brought the country. Individuals’ names are listed under their respective category along with their specific profession and what country they originate from. Names such as Ernest Hemingway, Albert Einstein, and the Barrymores are all featured in this borderline boastful compilation in an attempt to cultivate a sense of pride and admiration for America’s immigrant population.

Despite this collection of significant figures of society, the legend also serves the typical role of decoding. Underneath the list of names, the legend explains the use of symbols throughout the map. Four images that can be seen across the map are listed as well as the religion that they represent, along with the number of people who identify with that religion. While nearby text states that there are over one hundred and fifty religious bodies within the country, this map questionably chooses to only represent four main branches: Protestantism, Catholicism, Judaism, and Eastern Orthodox. In addition to the key, the country’s religious variety is also shown in additional text boxes in the upper right hand corner. Here, the home countries of the largest immigrant populations are listed along with the primary religion(s) of those immigrants. Bourne drives home this point of U.S. diversity one last time through the use of the red ribbon on the map itself, once again using it as a way to unite the different groups. By placing ethnic groups along with their religion on the ribbon in the location in which they typically reside, it not only gives the viewers a concrete image of the new cultural layout of America, but it also subconsciously ties seemingly unrelated groups of people together, counteracting the growing divisions within the country.

Generally speaking, “America – A Nation Of One People From Many Countries” was created with an admirable goal- to unite people. However, upon further inspection, there are some questionable details within this work. The most obvious is the reduction of all immigrants from the continent of Africa to a singular group. This in itself is bad enough as it completely disregards the wide range of ethnicities and cultures across the continent, yet Bourne further offends by using a highly degrading slur in reference to this group. Another clear point of cultural insensitivity is the drawing and note about Native Americans in the bottom left hand corner of the map. Not only does this segment immediately write off the importance and presence of indigenous peoples in America, but the sketch perpetrates the stereotypical image of native americans. These reductions and flat out omissions are quite ironic when we circle back to the intention of this map. While claiming to “counteract the propaganda of racial and religious prejudice which seeks to divide America”, this map continues to enforce the isolation of African and Native Americans from the rest of the American population – an issue that to this day our country still struggles with. However, just as this map had the power to reverse the growing hostilities towards immigrants, contemporary maps hold that same power. Current day cartographers continue to use maps as agents for social change, to challenge outdated beliefs and introduce new and progressive ways of thought.

1 Response to Map Of The Week