Atlas of the Week: Why Preserve the Night Sky? 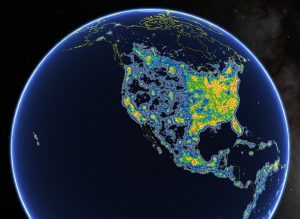 This atlas depicts the amount of light pollution in the world measured on the Bortle scale. High concentration areas of light pollution radiate white and red from the source, while more rural regions will appear to be green and blue, and no pollution zones appear black. Locations are ranked into different classes (Class 1: least pollution – Class 9: most pollution), on this scale. Not only is light pollution causing us to look through our eyes from a different perspective. The night sky is a map that has been around since the creation of the universe. It has helped our ancestors find their way across the globe, it has been the source of inspiration for writers, philosophers, and artists. It is a route of interconnection between science, spirituality, and religion. Seeing the night sky is not only a reflection of our harm to the planet, it is also a loss of culture. This map is a great tool to learn about how you are affected by artificial lights.

“North America in the New World Atlas of Artificial Sky Brightness,” as seen in Google Earth by Fabio Falchi taken from the Time article, “One-Third of the World’s Population Can’t See the Milky Way Thanks to Light Pollution