Richest Billionaires in Every State in 2021 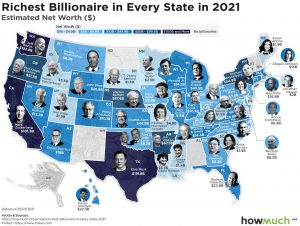 In 2020, the COVID-19 pandemic began and an economy like never before came from it. Unemployment drastically rose, many large and small businesses closed, and others struggled to stay open. However, during the mass unemployment and bankruptcy people and businesses endured, stocks were at their record highs and companies like Amazon and Tesla along with technology companies thrived. The gap between the wealthy and poor has greatly increased since the beginning of the COVID-19 pandemic. This map from HowMuch.net specifically shows the wealthiest billionaire in every U.S. state in 2021, hinting at the inequality in our country when it comes to wealth.

HowMuch.net’s website’s ultimate goal is to teach people how to understand money, whether it is taxes, debt, insurance, stocks, or loans. There are tons of other maps and graphs that explain and help visualize each of these subjects. For the map I chose to discuss, because the focus is only on the wealthiest billionaire in each U.S. state, the map is only of the fifty states. The map is very straightforward. A state is a dark navy blue if their richest billionaire has a net worth of 100 billion or more and the color gets lighter and lighter according to how rich the richest billionaire is. If a state does not have a billionaire then the state is colored a light gray. There are only seven states that are not home to any billionaires: Alaska, New Mexico, North Dakota, Alabama, Vermont, New Hampshire, and Delaware. There is a legend at the top of the map that displays this. Also, in each state that has a billionaire, the map displays a portrait of its richest billionaire and next to it is their name and their net worth. The map does not offer much information after that. I believe the map could have included descriptions at the bottom about why each person is as wealthy as they are, along with the billionaire’s name, net worth, and where they live. This could be seen as a silence of the map.

Jeff Bezos is not only the wealthiest person in the state of Washington, but he’s also the wealthiest person in the world. Ever since the COVID-19 pandemic started, people have been less likely to go outside. Rather than going to physical stores to shop, people would choose to shop online because it is “safer” and easier. Much of the online shopping would take place on Jeff Bezos’ Amazon. Bezos is the founder and CEO of Amazon, and because of the major increase and dependency of online shopping in the past year, his net worth has almost doubled since the start of the pandemic. His net worth was estimated at $113 billion at the start of the pandemic and is currently estimated over $192 billion. Bezos is not the only billionaire who has benefited during the pandemic as the net worth of Tesla and SpaceX’s CEO Elon Musk has grown over 500%. His net worth at the beginning of the pandemic was an estimated $24.6 billion and is now estimated at over $166 billion. During the making of the map, Musk’s net worth was estimated at a whopping $191 billion and for a short period of time he surpassed Jeff Bezos’ net worth to claim the title as the richest man in the world. The demand for electric vehicles surged along with Tesla’s stock price. It blew up this past January taking part in its total increase of 900% over the past year. His net worth has clearly gone down from $191 billion, but the value he lost does not compare to his value gained.

Another tech guru that experienced a large increase in their wealth was Facebook’s co-founder and CEO, Mark Zuckerberg. Because COVID-19 made it harder and less likely for friends and family to get together, Facebook allowed those to stay connected in the safest way. The 2020 U.S. presidential election was also a popular topic on Facebook with everyone sharing articles and videos. From the combination of more users and the stock price of Facebook increasing almost 100%, Zuckerberg’s estimated net worth rose from roughly $55 billion to over $100 billion in the past year. The background and stories behind how Jeff Bezos, Elon Musk, and Mark Zuckerberg’s estimated net worth grew tremendously during the pandemic are just some examples of what the map could have added to create a better understanding of today’s wealth inequality. Although after analyzing the map and doing more research to prove the inequality in today’s wealth worked, this map is both effective and ineffective at the same time. It completes its goal in showing the wealthiest billionaire in every U.S. state in 2021, but it lacks the sense of a deeper meaning. It does not try and imply that we need to try and solve the gap between the wealthy and poor that has greatly increased since the beginning of the COVID-19 pandemic.