The World According to Americans 2012 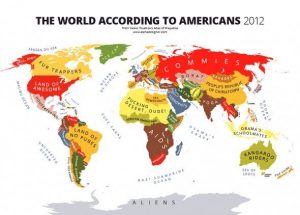 The map we will be discussing in today’s post is the “World According to the Americans, 2012” from the Atlas of Prejudice, a book and a website by artist and writer, Yanko Tsvetkov. This map shows a clear view of how Americans see and identify rest of the world during the modern era. As everyone knows, America is the greatest country of them all and country of “make the dreams come true” and freedom. At least, that is what Americans like to think of themselves, which one can clearly see and conclude from the map where they labeled the USA as the “Land of Awesome.” The map is certainly a bit ignorant; however, the author/artist of this map is not ignorant himself, yet he is challenging American attitudes that are ignorant. The map seems to coincide perfectly with many American’s preconceived notions of places that they know little to nothing about. However, seeing such brazen prejudices laid out, country by country, might even shock them.

To start with, the map is not very detailed, which was the author’s/artist’s final purpose because he doesn’t want geographical details and accuracy to stand out. What he wants is trying to make a clear attempt to simplify the world into these stereotypical categories as seen by the Americans. This is why the map is made as just a plain, simple layout of the world where colors mark different countries, where oceans and seas are not covered with blue. In this way, they do not stand out and take the reader’s eye away from the actual meaning and purpose of the map. All the names are capitalized, which takes away from the meaning of capital key letters and makes the map a bit messy.

Furthermore, as mentioned before, the map shows just a general view with no deeper thinking about those countries, without more knowledge and research from people who view the rest of the world like that. The author/artist Tsvetkov is challenging the close-minded Americans who think that these countries still hold the same values that they used to in the past. They associate each country with what is most popular to them and how they see that population on social and economic levels. Everyone who knows and learned more about world situations and what is happening nowadays and how not just America, but the whole world is improving at a fast pace, probably has different associations towards each country that is labeled on this map.

If anyone who lives in those countries sees this map, they might be shocked at how the Americans still think of and see themselves. They would find it to be rude and offensive with zero respect for those who are not Americans. This map emphasizes the division between how Americans see the world and how others see Americans. Citizens outside America who love their country, and respect where they have been raised, might have their country pride offended. While Tsvetkov is making a very critical argument against America, he is also using a very dark kind of humor. The map is funny, but within that humor is a very sharp critique about American stereotypes of the world.

Personally, coming from Croatia, located in central and southeastern Europe, I find this map very offensive and heartbreaking. This map reveals that the great nation that I was looking up to my whole life and where I wanted to come study and live thinks so little of my birth home and undervalues it. This really makes me sad. Firstly, Balkan countries are similar, but we are still different nations with different traditions and values, and they cannot see us as one country. Secondly, to think of my home as simply “Bombs” in the map shows how little Americans know about not just history but the present day situation there as well. None of us chose to find ourselves in a war or to lose relatives, but that is our past. We have improved a lot since then and are one of the most beautiful and happiest countries if you ask me. Lastly, I am sure that these Americans are not even aware of how much they would like to be spending their holidays right in that area denoted as “bombs.” There are more and more Americans each year traveling to the Balkans and choosing us as one of the top summer destinations.

This map is inescapably and inevitably political. It makes a strong political protest against the simple-minded stereotypes that many Americans perpetuate. We can see such politics through putting America at the center of attention, with the rest of the world not nearly as good as “the land of awesome.” Everyone else on the map has problems and are either there only to serve the American economy and its people, or as an area to avoid because of a nation’s past. This map reminds us that the U.S. government makes all decisions based on what works in its favor and how it can secure themselves or make more money from other countries.

As a conclusion, it can clearly be said that this is a deliberately provocative map and designed to offend. But it also represents how Americans should educate themselves and try to actually learn about other countries and not just think that Americans are the greatest people on earth. For their success, Americans needs the rest of the world, and their resources, people, products, and so on. One nation can be better than another, but there is no the greatest and most ideal nation for anyone because we are all different and prefer various lifestyles that America is maybe unable to offer.  All in all, this map succeeds in carrying the power that represents stereotypes of the world from the American point of view.

1 Response to The World According to Americans 2012