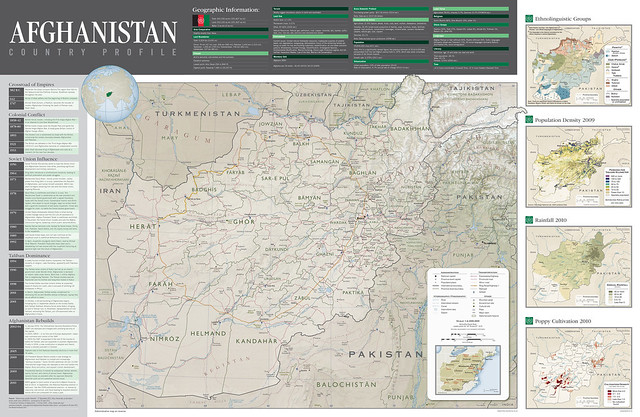 The United States Department of Defense has appropriated nearly $3.7 trillion since 2001 for the wars in Afghanistan and Iraq (Crawford, 2016). To effectively conduct military operations, reason stands that the United States invests heavily in its intelligence capabilities. One way in which the Central Intelligence Agency provides intelligence is through cartography. By knowing a nation’s geographical space and context, the CIA can better understand its perception of the threats it faces. In the CIA’s declassified cartographic profile of Afghanistan, the agency’s usage of codes, such as iconic, linguistic, spatial, temporal, and presentational codes, helps the audience understand the author’s perspective on the nation, which may conflict with the perspectives of others (CIA, 2016).

The CIA’s profile of Afghanistan contains various, detailed contextual information that creates the perception of a highly accurate and factual map for the audience. After all, the U.S. military commanders, who make decisions based on intelligence such as this profile from the CIA, expect the utmost accuracy in its intelligence information to gain operational superiority on the battlefield. Therefore, the CIA uses many iconic codes in its Afghanistan country profile to create the perception of an indispensably high quality map for the military operators. To steal from Denis Wood’s terminology, the various symbols displayed for different roads, canals, and other infrastructure such as airports highlight a symbolic operation as well as a schematic operation (Wood, 1993). In other words, the different symbols for a “minor road” versus a “provincial road” signify unique degrees of overall representation (CIA, 2016). This representational technique gives the intended audience of this map the ability to identify which areas have a greater capacity to conduct military operations per Afghanistan’s present infrastructure as identified by the CIA. Thus, with the CIA’s use of iconic codes, it creates a perception that its map is qualified for use by military decision-makers. However, Afghani residents may very well disagree with this map’s quality because the CIA might subconsciously, through a lack of intelligence gathering, or deliberately, with an intent to persuade, withhold information deemed operationally significant.

This map additionally contains numerous linguistic codes in English. The CIA’s linguistic identification for cities, regions, and ethnic groups, showcases the original intent of this map to serve as an intelligence resource for the United States military; the military commanders likely cannot understand the local dialect. While the military may favor and appreciate these linguistic codes, the various ethnolinguistic groups in Afghanistan could view these codes as an oversimplification of relevant information in the context of military operations. The military may identify a specific village as one thing in English, for instance, but the local road signs, if any, could display an entirely different name for the village, which may adversely affect military operational success.

Furthermore, the other maps and data surrounding the central geographic and political map imbue a spatial or tectonic relationship for the audience to relate specific external information to the information contained within the central map; the ethnolinguistic groups, population density, rainfall, and poppy cultivation maps help the audience understand perhaps why more contextual iconic symbols are displayed in the northeastern region of the map. Yet, these maps and data, once again, are very subjective. Whereas the CIA would like to convey to the military an element of significance for the ethnolinguistic groups, population density, rainfall, and poppy cultivation, others may argue against its relative significance. For example, the CIA may believe in a correlation between ethnolinguistic groups and Taliban support or poppy cultivation and Taliban financing (the poppy plant may produce opium that could be used for money to purchase weapons). However, the individuals generalized among these groups may be staunchly anti-Taliban or cultivate poppy for their own sustenance and economic wellbeing.

Moreover, the perceived quality for this map, as viewed by the intended audience, correlates to the maps recency of subjectively included data. Specifically, the timeline on the left provides historical pretext leading up to and during the war in a temporal aspect that the military can factor in its decision-making. The time in the context of military operations aides the intended audience’s ability to understand broader geopolitical sensitivities and implications for its potential actions. One must understand, however, that the information included in this timeline solely exists based on what the CIA deems relevant. Whereas the United States may perceive its operations assisting a faction of the Afghani people against the Soviet invasion in 1979 as beneficial, the Afghani people may view further U.S. actions as an illegal extension of imperialist, influential ambitions despite American rhetoric.

The CIA’s presentation of information and geographical space also reflects the necessity of the intelligence gatherers to convey as much information (although subjective) as possible to the operational commanders. For example, the map contains a timeline on the left, demographic information on the top, additional demographic, climate, and natural information on the right, a detailed key on the bottom, and an overarching central, geopolitical map. While the military may perceive this profile to be accurate, informative, and high quality, the map’s size cannot realistically include every relevant piece of information. Evidently, the map may omit crucial data in the eyes of other audiences.

Since the physical constraints of this map as well as the subjective biases of the CIA limit the scope of this profile of Afghanistan, the Afghani people and geopolitical rivals, among others, may easily perceive this information in an entirely different view. Therefore, both the intended and current audiences of this declassified profile must take these alternative viewpoints into consideration. Clearly, the CIA’s map can lead current audiences to rhetorically infer various contextual significations that otherwise stray from the agency’s original intent or from the intended audiences’ perception of the information. However, in context, this profile seeks to market like an advertisement for specific courses of military action. The established relationship of trust between military decision-makers and the CIA may impede the military’s ability to make more informative decisions. Perhaps the military did in fact misunderstand various contextual data because, despite invading nearly two decades ago, U.S. forces remain in the country. Ultimately, any individual who views this profile must account for the fact that the CIA constructed this profile with its own unique interpretation of Afghanistan for a specific military audience. The data and information contained within this profile reflects a bias and motivations not completely understood by those outside of the CIA. Audiences therefore may argue the CIA’s conveyance of facts and make their own conclusions from the rhetorical displays of this profile from their own unique perspectives outside of the contained information. A map cannot possibly be accurate for any audience due to its physical and contextual restraints and the inherent biases of the map-maker to neglect including information either subconsciously or deliberately.