Map of the Week: “Europe from Moscow” 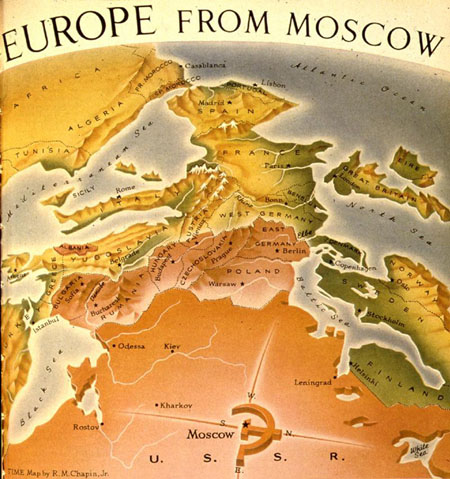 The bold orange and unorthodox perspective immediately draws the viewer in. This is exactly what the cartographer, R.M. Chapin Jr. intended, when he published, “Europe from Moscow,” in a March 1952 issue of Time Magazine. R.M. Chapin Jr. was a prominent Cold War cartographer who worked for Time Magazine. At the time this map was published, Time had well over 700,000 subscribers, giving its wide audience weekly access to all kinds of maps depicting America’s global role in the world. By publishing a map like this in a well-known American magazine, Chapin Jr. was trying to invoke a sense of fear in the American public. By using vivid colors, that clearly put the United States and the Soviet Union against each other, he is able to convey the political tensions that existed between the United States and the U.S.S.R. during the Cold War. This map exemplifies the way American cartographers played on the fears of the American public during the Cold War era.

This map was published in 1952, during the height of McCarthyism and the Second Red Scare in America. At this moment in history the United States and Soviet Russia were engaged in the early stages of the Cold War. With the Second World War behind them, and Europe devastated and in ruins, many European countries were vulnerable and susceptible to the influence of these emerging superpowers. With the United States and the U.S.S.R. vying for power and influence, Europe became a highly contested battleground.

Upon first glance at the map you feel uncomfortable. Chapin Jr. strays away from a traditional projection such as the Peters or the Mercator. The map is not oriented in a normal fashion, we are not used to seeing maps that aren’t centered on a continent or a pole. This is a stark reminder that direction and orientation are just rhetorical strategies used by cartographers. Chapin Jr. was drawing on a novel perspective that other cartographers had been using in popular magazines and newspapers since early World War II. These cartographers had been experimenting with non-traditional perspectives and orientations in order to convey their views. During World War II and the Cold War maps had evolved into more than just merely showing geographic information. Prominent cartographers such as Richard Edes Harrison were using maps to make statements and invoke emotions out of the viewers. More than anything else, cartographers used these maps as way to get the audience to reflect on what was going on in the world and to get the average American to think about what needed to be done. These maps propelled Americans into the global world of politics. This is exactly what Chapin Jr. was trying to do with this map.

Upon further observation we are immediately drawn to the bottom of the map, in which a big orange U.S.S.R. is jutting outwards into Europe. The cartographer uses the color orange because it is a bold color that really grabs the audience’s attention and is similar to the traditional red often associated with Communism. In addition to the U.S.S.R. being orange, all of the Soviet satellite countries are also colored orange which gives the impression that the U.S.S.R.’s control penetrates deep into Eastern Europe. The Western European countries are colored green and yellow and serve as a strong juxtaposition to the orange of the Soviet satellite nations. I believe the cartographer chose to color these countries green and yellow to emphasize their freedom and Western-like economies. Chapin Jr., being a political cartographer rather than a scientific one, was not looking for scientific nuance but rather a very accessible argument about the influence and geographic relationship between Europe and the U.S.S.R.  His simple yet effective use of color really helps to illuminate the geographical and political tensions that existed in Europe during this time period.

The title of the map, “Europe from Moscow,” is short and simple but serves an important rhetorical purpose. It conveys to the audience that Soviet Russia has one goal and that is to spread Communism across all of Europe.  The way the map is formatted makes it look like Soviet Russia is already advancing through Europe, with a sea of orange following close behind. This made it seem as if it was almost inevitable that Europe would fall to Communism, which was a very alarming thought. Chapin Jr. chose a very simple and evocative pictographic map that was very common during this time period, especially in Time. These maps made it very easy for the audience to understand what the cartographer was trying to convey and to comprehend the overall message. The Cold War conflict specifically lent itself to this type of map because it was an, “us,” versus “them,” conflict. It was easy to portray the U.S.S.R. as the aggressor and make it out to be the enemy. Through Chapin Jr.’s strategic use, of a simple yet startling map, he is able to further polarize the American public, and put the U.S.S.R. directly against the United States.

Another captivating facet from the map is the compass located at the bottom near the center of the U.S.S.R. Instead of a regular compass, the cartographer chose to make a compass out of the traditional Soviet hammer and sickle symbol.  The lines coming out from the compass are unsettling. They appear to be sharp and straight just like swords. It conveys the feeling that Soviet Russia is invincible and not afraid to fight to anyone that gets in its way of spreading Communism. In addition to the compass, another noteworthy feature of this map is the absence of the United States. Without the United States in the picture it seems as if there is nothing stopping the U.S.S.R. from taking over all of Europe, which again is very intimidating. This map reflects a propaganda map in its aesthetics. Chapin Jr. creates a map that defies the traditional standards of maps and provides the audience with a distorted view of reality. It appears as if Soviet Russia is going to easily take over all of Europe and in fact is already on its way to doing so. Chapin Jr. intended to persuade Americans to take a stand against Communism in Europe and ultimately around the world. The fact that there were parts of Europe still green and yellow gave Americans hope that all was not lost.

Denis Wood, a prominent cartographer, can shed light on the idea that there is no such thing as completely objective cartography. All cartographers are inherently biased. However it’s not that Chapin Jr. was biased, although he certainly was, it was more the era he was mapping in. The Cold War provided a platform for this type of polarizing cartography. Americans were unsure of what the future held and how to react to all of this conflict. This provided an avenue for a cartographer such as Chapin Jr., to create a map that persuaded Americans that Soviet Russia was on its way to taking over all of Europe. It was up to the United States of America to prevent this from happening.  Chapin Jr. successfully conveys the danger of the spread of Communism throughout Europe, and America’s responsibility, as a country built on the principles of freedom, equality, and liberty, to stop it.