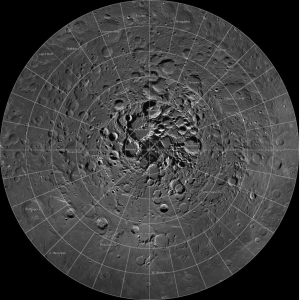 Once the United States successfully placed a man on the moon, the last frontier was finally breached, and with it came a new age of exploration. As the possibility to send a man to the moon became ever more probable in the sixties, NASA and other international space organizations dedicated their efforts in mapping the moon. Just like the Europeans began to map the “New World” during the age of exploration, scientists believed that mapping the moon was an essential step in the process of landing a man on the moon. Presented in our FYS course, the Lunar Wall Mosaic: (compiled by the US Air Force in 1962) typifies the extreme interest in cartography at the time of the Space Race. More importantly, it also set the stage for a new era of cartography, an era where maps are compiled using colossal data sets that not only improve accuracy but also redefine the way users can interact with the maps they are presented.

Today, more than 50 years since the publication of The Lunar Wall Mosaic, the continued advances in technology have confirmed the initial hypotheses about the direction of cartography. What used to be an accurate trustworthy map of the moon in 1962 almost seems absolutely useless compared to the improved LROC Northern Polar Mosaic that was recently published by NASA and Arizona State University. Unfortunately (or fortunately), the second a map is completed it is outdated. Since maps are not constantly changing like the space they hope to capture, they can never be an exact representation. The moment images taken from a satellite were sent to Earth for someone in the Air Force to analyze, there was some change on the moon (whether it was a small rock that moved out of position or an asteroid that hit the moon) that immediately made the image an outdated representation of the moon. Nevertheless, this limitation is also what makes maps so useful because they help preserve a space or idea within a historical context. Additionally, by making abstract representations of the spaces they capture, maps are able to synthesize massive amounts of information in an effective form that we can more readily understand.

In 2009 NASA dispatched the Lunar Reconnaissance Orbiter, which has effectively been taking photos of the moon for about four years now. Just as the name suggests, the map is effectively a selection of approximately 10,581 images that were connected to make an interactive mosaic. The thousands of pictures compiled to create this map also hints at the heightened tension between cartography and photography in future mapmaking. Unlike cartography, photography has always had a stronger connection to authentic reality because it manages to exactly capture a given space at an instantaneous moment. Maps might not exactly represent a space, but they are able to abstract the space to portray more than just a geographical reality but more importantly a social or economic reality. Although future cartographers might depend greatly on photography in their production of maps, there will always remain an essential abstraction that makes maps unique in their ability to simplify complex data.

Unlike previous maps, maps of the new era of cartography (such as the Northern Polar Mosaic) have shattered the limitations of what a map can display to its audience. Maps have essentially extended their already massive amount of power. Made up of 681 billion pixels, the map can display the surface of the moon with such detail that it has given NASA the power to more efficiently find landing spots for future missions and even to assess minerals and water in the moon’s soil. There are so many pixels in this map that each pixel is equal to just two meters.

Although the technology behind the creation of this map will never seize to amaze me, it is equally interesting to assess what these advancements in technology will mean for the future of cartography. Using this map as a glimpse into the future of cartography it is important to recognize some of the unique features of this map, which bring up some interesting topics in the science (or art) of cartography. The zoom in feature of this map is perhaps the single most important and amazing aspect of the map. It allows the viewer to look at the surface of the moon with such detail and clarity that it almost makes the viewer seem like he or she is actually on the moon. The viewer can also drag the Northern Pole of the moon in any two dimensional direction to better navigate through the map. Given that this map was a selection of images, rather than an abstract drawing or design some individual created, can this map actually be considered a map or is it just a large picture? As cartography develops, maps are becoming much more accurate and less abstract in portraying the spaces they capture. They can manage and hold massive amounts of information that not only make them more accurate,but more importantly, give the map more power. As Denis Wood constantly reminds us, maps are power, and the Northern Polar Mosaic is no exception. Even the amazing technology used to produce this map give it a significant impressiveness that demands scientific credibility; making this map a symbol of intellectual superiority. NASA created this highly sophisticated map because it gives them power, a strategic advantage, over the moon.

The Northern Polar Mosaic is an example of the tremendous revolution in cartography, which begins with the implementation of sophisticated technology. The use of this advanced technology provides a magnificent tool for cartographers to better express their interests. More importantly, the advancements in technology now allow users of maps to take a greater role in the rhetorical life of modern maps. However, with these advancements in cartography through the use of different technologies like the internet and modern photography, maps may lose their unique ability to abstract complex arguments. Furthermore, the increased power maps will hold in the new era of cartography might lead some states to abuse their power in order to pursue and enforce their interests.

Like so many other sciences, technology has given cartography the ability to break through its traditional barriers and make them even more indispensable in our societies. In 2014 NASA has successfully mapped the northern pole of the moon with such precision that the tracks left behind by astronauts from the six Apollo landing sites are clearly visible, it is difficult to imagine what maps will be able to tell us in fifty years – welcome to the revolution of cartography.

2 Responses to Northern Polar Mosaic: The Revolution of Cartography