Map of the Week: More than half of humanity lives within this circle 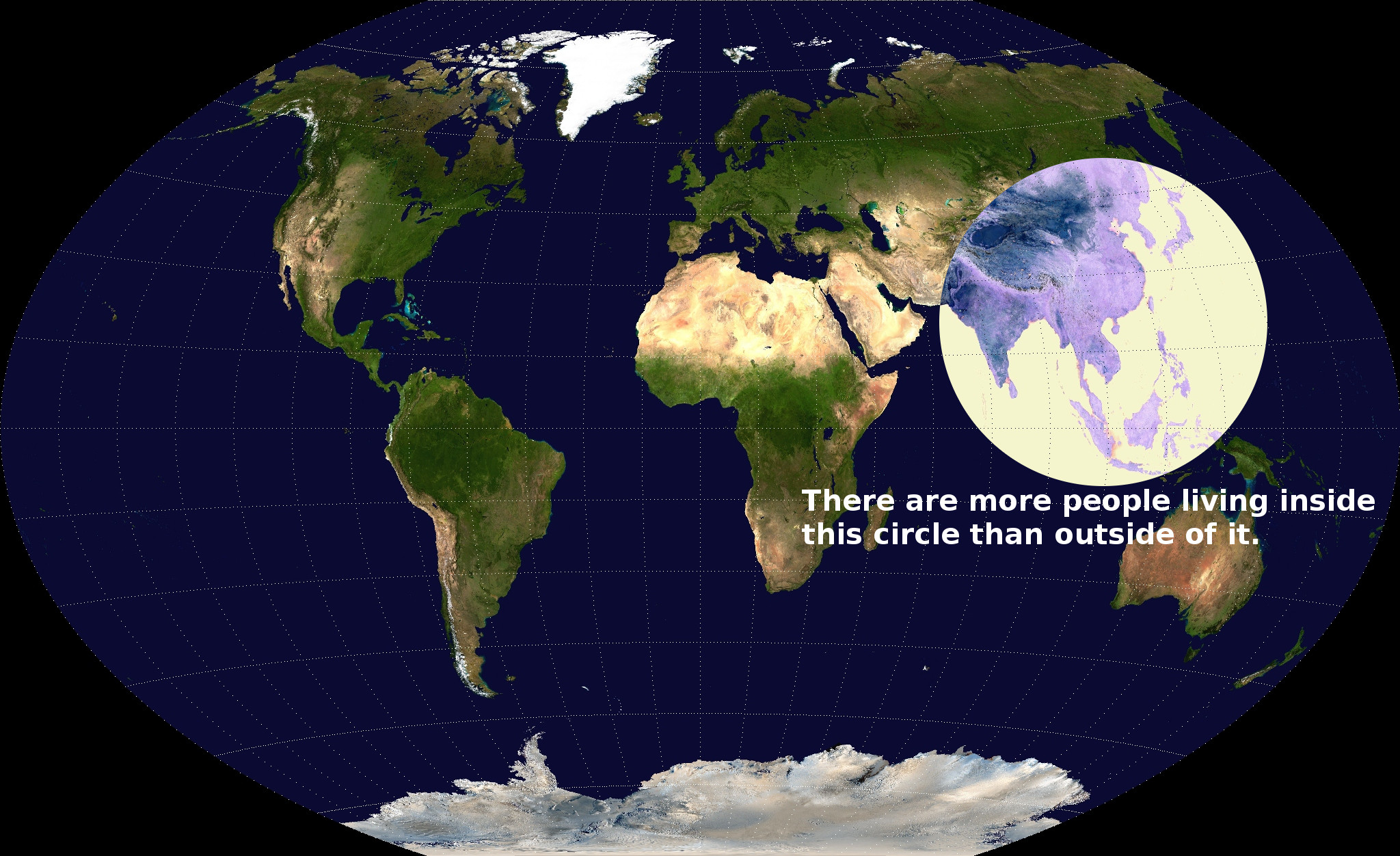 During the past several years, the continued increase in population has been becoming a serious problem throughout the world. With the increase in population and rapid use of limited natural resources, it is becoming very hard to sustain life in certain parts of the world. The world population, according to the U.S Census Bureau, is roughly 7,083,460,000. This map, which was featured in the Washington Post’s 40 Maps That Explain the World, shows that there are more people living in the white circle than outside it. China has the largest population with 1,349,585,838 people and India comes in a close second with 1,220,800,359. These are astonishing numbers that are only predicted to increase. Although with these populations being so high, many of the countries located inside the circle are developing countries. These countries do not have the technology and capability to support the populations; many people are forced to live in horrendous conditions. To try and control population, some governments use unethical methods to try and stop the skyrocketing population. Developed nations are put in a hard position because they want to help countries that are struggling, but they also need resources for their own people.

When viewing a map, perspective is a huge component in trying to understand what the cartographer is trying to get across. Usually when talking about population people use numbers to compare because numbers tend to be easier to understand. This cartographer does something out of the ordinary and uses a map to split the world into two parts. The area inside the circle is one part and all the area outside the circle is another part. By splitting the world into two parts, the map becomes very simple. It emphasizes the fact that there are more people inside the circle even though there are a lot more countries and land outside the circle. This shows how condense the population is in the area inside the circle.

Although this map brings up many good points by splitting the world into two parts, there is one problem with this approach that tarnishes the map. By being split into two groups, the map becomes very general and does not give country names, borders, or the population for any country. By doing so, this becomes a map of the haves and have-nots. The viewer of the map is forced to have knowledge on where each country is located and how big it is. Since the map does not give populations for any country it blends all the populations together. With all the populations being blended together, the map doesn’t allow you to make any individual national comparisons or interpretations of how different countries’ populations are, it simply splits the world into two different areas.

Overall, this is a very fascinating map that shows a very different approach on the population of the world. Although it is eye opening to see that more people live in 2/3 of Asia than the rest of the world, there are a lot of concerns that are brought up by this fact. Governments need to start implementing policies before the populations get so far out of hand that it cannot get fixed.

Dewey, Caitlin. “Map: More than Half of Humanity Lives within This Circle.” The

4 Responses to Map of the Week: More than half of humanity lives within this circle