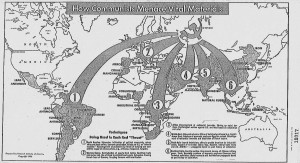 The “How Communists Menace Vital Materials,” is a propaganda map that is portraying the USSR as a “Menace.” The Map was created by the Research Institute of America, an early private think tank. The map was created in 1956 which was right around the time of the Red Scare.

The Red Scare was a time during the 1950’s where Americans were being accused of being communists. Although many powerful people believed in the Red Scare, Senator Joe McCarthy was the main leader in accusing American citizens. The map, enhances the idea that communism is all around the world and that it can attack and “menace.” In the map the big red arrows, correlate to the “Techniques Being Used in Each Red ‘Thrust.’” In the techniques, the map describes how in different parts of the world the USSR is taking over and destroying and using the country for its own good. The map also talks about how the USSR has been using anti-American propaganda, which is quite ironic, because this map is a form of propaganda.

When looking at the map it is clear that the USSR is the center of attention due to the huge sickle and hammer that is on top of the USSR. When looking at this map the reader needs to have a general knowledge of what was happening before and during this time. The US was trying to stop the spread of communism and promote the spread of democracy. The Cold War was essentially communism vs. Democracy. The map itself, was created like stated above by a private institution. Furthermore, this map was used in two congressional reports, which shows that congress was using this map to create even more hatred toward the USSR. Overall it is important for the audience to see this as what it is, a form of propaganda.