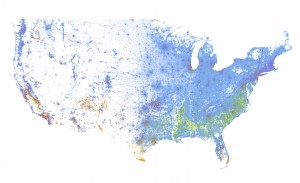 Identity: the fact of being who or what a person or thing is; a close similarity or affinity.¹ But is defining identity just a simple fact? Identity is a social construction; it is developed through our social relations and interactions.  Defining personal identity is often one of the most challenging introspective questions of life, and classifying one’s race is a contentious category by which identity is defined.  This element of defining a geographic identity by race is exactly what The Racial Dot Map forces people to interpret. Race is not a clear-cut genetic distinction; rather, defining race is influenced by society, and in the case of The Racial Dot Map, government-selected classifications.  The depiction of race and ethnicity on The Racial Dot Map oversimplifies the complexities of the question of identity.

The Racial Dot Map was plotted in accordance to data collected from the 2010 Census, a government- run organization.  There are 308,745,538 dots on the map, each one representing a person in the census, which were then placed in the corresponding individual’s “census block” on the map.  Five different races and ethnicities are represented through colored dots: non-Hispanic White (blue), non-Hispanic Black (green), non-Hispanic Asian (red), Hispanic or Latino (orange), and “other” (brown).²   Distinguishing the races by color implies that each race is its own separate entity with no overlap or confusion. The U.S. government considers race to be an important category to study in its attempts to keep sophisticated surveillance on U.S. citizens. The Racial Dot Map uses data from the U.S. Census and to display five different racial categories in accordance to their census block.

The five categories chosen by the government to be used in the Census Data isolate Hispanic as a qualifier in 4 of the 5 categories provided.  This particular focus seems to imply that the government has a high interest in Hispanic demographics and makes every attempt to make sure that respondents only identify as Hispanic or Latino after first ruling out the other categories.  As the fastest growing minority population in the country, it is no wonder why the government is so interested in the changing demographics of the Hispanic population.  It becomes clear through the Census Data questions that the government is interested in tracking the Hispanic growth and geographic distribution.

The government can use these five racial categories in ways to benefit both the society and benefit themselves.  Large cities such as Dallas, Atlanta, Detroit, Washington D.C., and New York City are easy to identify even though the map intentionally omits labeling the territorial borders.  These large metropolitan areas appear to be the few locations where there is a large conglomerate of minority races, which can largely be attributed to the “white flight” during the 1950’s.  The 1950’s were a time defined by riots and civil disobedience, which enticed white people living in racially diverse cities to move out into the suburbs.³  In Marilyn Salenger’s article “’White Flight’ and Detroit’s Decline” she claims, “white flight took hold and left a lasting imprint.”4 The migration of white people out of city centers and into the suburbs during the 1950’s still has a lasting effect on the settlement patterns of people today.  The Racial Dot Map depicts distinct racial segregation that the government can use to make decisions that better society. For example, population statistics are used to determine fair distribution of school funding and programs.  Policymakers can use this data to gerrymander for self-serving or party benefits.  The government holds the power over the people by choosing certain racial categories, and then uses this information in their decision making process.

One of the largest flaws of The Racial Dot Map is that if a respondent completing the form does not indicate themselves White, Black, Hispanic/Latino, or Asian, they are lumped into one giant “other” category.  This downfall is a result of limiting choices to five racial categories the Census Bureau chose to use in their questioning during the 2010 Census. Society looks down on the “other” category–   “others” board planes only after all of the premium valued flyers are seated, there are the popular kids and then the “others,” “others” have to wait in long lines to get through airport security.  How does being classified as “other” influence one’s self-image and identity?  The Census Bureau’s lack of diversity in response choices does not reflect the complexity of the race question.  In essence, the Census Bureau is making people define their identity without properly representing the race.  The “other” category skews the map because such a large portion of America’s population is mixed-race or does not identify with one of the four categories.  This map forces people to choose their ethnicity when it isn’t necessarily a clear-cut decision.

Cartographic choice comes into play in The Racial Dot Map, as it is impossible to include all of the varying combinations of ethnicities present in such a diverse country. The Racial Dot Map is an institutional map meaning there is not a single cartographer responsible for making decisions on what to include in the map, but the individual in charge of developing the map is still responsible for transforming the government data into a tangible entity.  The Racial Dot Map uses data from the Census, meaning the government was in control of the cartographic choice displayed in the map.  David Turnbull explains the selectivity of maps and the meaning behind cartographic choice in his article “Maps and Theories;” he claims that maps are selective and a map’s bias is a result of the bias of the cartographer.  Turnbull continues that maps “do not, and cannot, display all there is to know about any given piece of the environment,”5 which is clearly shown by the decision to have only five flawed categories.  The government is responsible for the selectivity displayed in The Racial Dot Map, and as a result the government is essentially influencing how an individual defines race, and, thus, identity.

The Racial Dot Map displays the results from a census poll meaning that the government is largely responsible for the cartographic decisions made in the map.  The government was in charge of determining the racial categories and their corresponding color representation on the map.  The cartographer of the map stayed true to the Census Data, so in that sense it is in accurate portrayal of data; however, the data itself may be too restrictive.  Using color helped capture the interest of the audience, but the Cartographic choice involved in picking the representation of different races and ethnicities was one of the largest downfalls of the map.

²Image Copyright, 2013, Weldon Cooper Center for Public Service, Rector and Visitors of the University of Virginia (Dustin A. Cable, creator)

4 Responses to The Racial Dot Map