Six Decades of the Most Popular Girls Names: A Map! 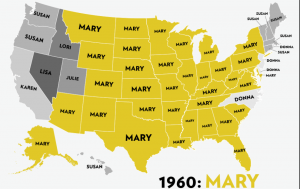 The beginning of it all

The universe is full of questions.  What is the meaning of life? What is Locke’s causal theory of perception? And, most importantly, why on earth are so many girls named Mary in Iowa? Never fear! The answer to all your questions, and more, is embedded in the contents of the ever popular Map of Six Decades of the Most Popular Girls Names. The map, based on data provided by the Social Security Administration, ranges from 1960 to 2012 and is color coded by the year’s dominant name. The ebb and flow of a specific name tells volumes about the mentality of American parents and the thought they put into the names of their children. The names themselves, miniature rhetorical restrictions of gender and personality, create lasting implications on what names are socially acceptable and what names give girls certain “labels”. 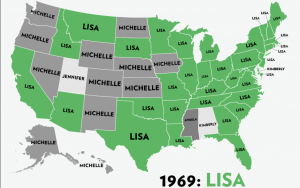 From Mary to Lisa

As the map shows, Americans tend to play it safe when naming their children; note the lack of Apple or Blue Ivy centric names throughout the years. One can assume why this is; a name is a powerful and long lasting device. The name not only describes the person it belongs to, but it also gives clues about the parents who chose the name. Every single name on this map, whether given in 1962 or 2008, is a traditional, conservative, and socially acceptable name to give a child. People given a less socially acceptable moniker are sometimes regarded as less than or different from the general public. Those who choose to give unique names to their children are often in the public eye; while they have no problem fully expressing themselves to the world, they cannot be so sure that their child will fully appreciate their birth name. Moreover, girls given less feminine names are also frowned upon by society. Girls are expected to exhibit noticeably feminine traits, and having a non-feminine name makes a girl stick out like a sore thumb. This map proves just this; the string of “normal” names shows the political power that a name bears. Clearly, there is a standard that women and girls are compelled to abide by, and that standard starts before birth, when a name is chosen for the new baby girl. 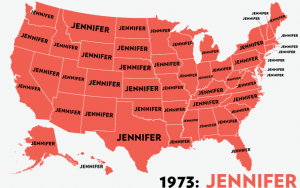 Seven times in the last sixty years have all fifty states logged a common favorite name. There are times when one name remains dominant; others where America favors multiple, trendier names. In 2007 Tennesseans were naming their girls Emma, Texans Emily, New Yorkers Isabella, and Pennsylvanians Ava, whereas Mary was a fan favorite for forty-eight years. Also, I am not sure what is in the water in Hawaii, but there is something about their citizens that like bucking the status quo of the rest of the country and favoring different names entirely. In 2002, Hawaiians loved Kayla and in 1996 Taylor dominated the islands. This trend could also stem from the background of the parents. Either local Hawaiians do not care about social norms enough to conform to traditional baby names, or the non-Hawaiian born residents were bold enough to make the move to Hawaii in the first place that giving a traditional baby name to their daughter was less appealing to them than those living in the continental US. 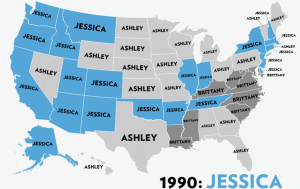 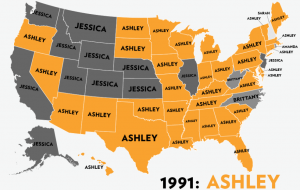 Ashley: New kid on the block or temporary game change? 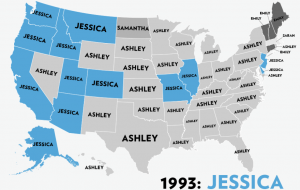 And thus the balance has been restored to nature

While names often cluster predictably in the same geographic locations, there are some time periods the map shows that are worth another glance. Take as an example the year 1985, in what I term the Jessica vs. Ashley debacle. In this year, 19 states (including population dense NY and CA) favor the name Jessica, while 25 states favor Ashley. Now, I am not a math major, but I know when two and two add up, it normally doesn’t equal five. So how could the country’s most popular name be the one that is favored in six states fewer than its adversary? As stated above, Jessica fans amass in states with a large number of people. Ashley fans, on the other hand, are centered in the Midwest. No offense to North Dakota, but it seems to be the place where popular names go to die. One can only assume that the map is based more on population than the sheer number of states preferring one name to another, although we are never officially told this by the cartographer (a weakness of the map perhaps?) In fact, we are never provided with the cartographer at all. Why did he or she choose to create a time-lapse map? Would any other style of map have delivered the facts better or more clearly than our map does?

Why these names? I could probably name at least fifty girl names off the top of my head, yet the map shows only a handful. Some of the names appear to have a more obvious explanation as to their popularity than others. In the 8th season of the popular T.V. show Friends, new parents Ross and Rachel name their child Emma. This 2001 episode could be the reason behind the name’s surprising appearance. In 2002, four states favored the name, while in 2003 twenty-two states were partial to it. In fact, Emma was the most popular baby name come 2008. One wonders if there are equally interesting reasons why some of these names are so popular that millions of Americans chose them. Ashley was apparently a more common boy name than girl until the 1960s, while Mary had reigned supreme since 1913, giving her a nearly fifty year long streak. (Pursuant to behindthename.com, remember to cite) It makes sense that Mary would be such a popular choice; the name is biblical, regal, and just downright classy. I don’t even want to start the discussion on why the name Isabella became so popular in the late 2000s, although I have a feeling it has something to do with a certain vampire/human combination. Interestingly enough, the most popular boy names are two fold: Michael (1954-1996), and Jacob (1997-present), both traditional and conservative names fit for strapping young men.  It is possible that this disparity in boy names is particularly damaging to this gender. Imagine being the only Kevin in a class full of Jacobs; how would you feel? 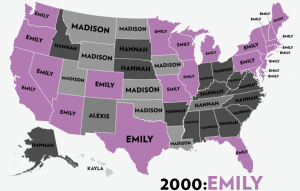 A new millennium, a new champion

What about the map itself? Does it follow what Denis Wood says about all maps being political in nature? The provider of the map, jezebel.com, does not list the specific creator of the map, simply that it was fashioned using the data from Social Security. However, I see no reason to question the intentions of Social Security; unless it is a way for the government to check up on the mentality of American parents, I would assert that the Administration is providing the data in order to appease curious citizens (or providing vital information to our alien overlords; either option is equally plausible). I also would claim that this information is highly accurate, although I would benefit from knowing exactly how the “most popular” category is organized (see again the issue of population of each state v. quantity of states per name).

Does this map have any silences or weaknesses? This is an annually recorded documentation of female names, provided by a government entity. Because it includes all fifty states over a very specific and meticulously recorded time period, I would argue that there are little to no silences (intentional or otherwise) on this map. What would be amazing would be if this map’s creator fashioned a “brother map” of the correlating male names; as previously stated, I have a hunch that most, if not all, the names would be as equally traditional and safe.

What is important to consider as far as this map is concerned is the relationship between each name and time, both on the whole and year by year. Sure, we could have been provided with sixty individual maps that would range from 1960 to 2011. But that collection of maps would not have been nearly as impressive as this time-lapse map is. The passing of time as related to the progression of female baby names in the country adds a whole new level of complexity and fascination to the map.  Because of the specific choices made by the phantom cartographer, the use of a name now takes on a whole different meaning. In 1960, it was the trend to name your daughter what you, your mother, your best friend, your neighbor, and your distant cousin from Nebraska were named. However, as the generation of Mary’s and Lisa’s have become mothers and grandmothers, we have seen, thanks to the map, entirely different trends devour the country and then recede to the annals of time. What names will conquer all others in 2060? Stay tuned for more details, because if a map is created of the Most Popular Girl Names over the past one hundred years, I will be here blogging about it. 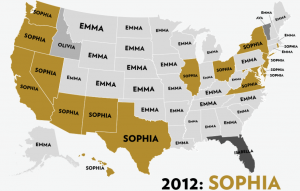 Author’s Note: As I am not the most technologically wise person, I am not able to embed a time lapse map within the database that is Mappenstance. However, I can post the link for any and all readers to follow to attain the full and powerful effect that is this map:

4 Responses to Six Decades of the Most Popular Girls Names: A Map!