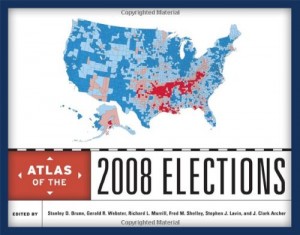 The Atlas of the 2008 Election, edited by Stanley D. Brunn, Gerald R. Webster, Richard L. Morrill, Fred M. Shelly, Stephen J. Laven and J. Clark Archer, is a breakdown of the voting patterns of the 2008 Democratic and Republican Primaries, the general election, major state-wide ballot measures, other “Key 2008 Elections,” and major congressional votes of the 111 congress¹. The most interesting feature of this atlas is its ability to breakdown one of the most momentous elections in a life-time into easy to understand and rather fascinating maps that most people would not otherwise think of. There are maps about travel schedules of the candidates in the week before the election, one of  the number of Google searches about each candidate, Twitter reports of wait time at the polls, newspaper endorsements, median center of each party, “Donor sheds,” and other important breakdowns of national statistics and the way certain groups voted².  The use of this atlas allows the reader of it to gain a much better and more in-depth understanding of the 2008 election and American politics as a whole.

This entry was posted in Atlases of the Week, Uncategorized. Bookmark the permalink.