Map of the Week: US States renamed for countries with similar GDPs 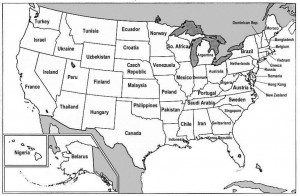 The United States of America has slowly constructed itself through the 20th century to become an economic power house. It is now recognized as a one of the main pillars of our world’s economy along with China, Japan, and Germany —just to name a few kings of the playground. The ‘US States renamed for countries with similar GDPs map’ (bigpicture.com) was produced in 2007 by the York Group International, which is a company that specializes in networking and expansion in international markets for technology companies. The assimilation of individual GDPs for every state with the closest GDPs of other countries around the world gives a new perspective that provides an understanding of the amount of impact the United States has around the globe. The map puts into perspective how much control the U.S. really has sitting right in the palm of its hands, but does it quite condescendingly. The political choice of containing entire nations in each American state stimulates the impression that the U.S. is sitting on top and has the right to influence these nations. While this map can enlighten and is definitely food for thought, it may as well raise questions and leave its viewer perplexed, hesitant, and even frustrated. The map provokes the viewer as much as a topical, intricate, and rhetorical Cold War map, however simple and unscientific this map might seem at first glance.

Commonly, “numbers speak louder than words”, but this map is the opposite. The simplicity in the choice of labeling each state with the name of the country as which it is connected to hits the viewer right in the face and rightly so. Indeed, there are so many conceptions that we have accumulated about a specific country that seeing its name “reduced” to a single state of the U.S. is shocking. Since one foreign nation has the economic power of one state, the map rhetorically conveys the sense that those nations are on average fifty times less powerful and influential than the U.S. All relations created in this map can be startling depending on personal biases, but some will stand out more than others under a western education. For example, Texas’ comparison to Canada is unexpected, Canada being more than fourteen times the size of Texas. The pair Maryland and Hong Kong seems ridiculous too. Hong Kong, with its skyline similar to New York City’s and its prosperous economy, is one of the world’s top financial centers in the world, but is in fact condensed to the little-known Maryland on the map.

From an international point of view, that surprising effect engenders a sequence of two specific reactions: conceited pride followed by a humbling process. As one associates themselves with a country, one oftentimes sets an unrealistic and bias view of its importance in the world. Accepting the fact that this nation only represents a 50th of the United States can be quite vexing. As that feeling starts to fade, the map also plays a humbling role. That is, it puts countries into an original perspective and forces the viewer to consent with that idea. Conversely, since the map reveals that America’s total GDP is far more superior to any other country, U.S. ethnocentricity is highly promoted. The convincing statement that Americans should influence the rest of the world can be problematic as being the giant economic power may entitle them to play the role of ‘parent’ for other nations. Given that they know what is best for them, the U.S. may feel like their duty is to provide order. The consequences from those nations can range from a polite request to deal with homeland issues without foreign intervenience to acts of terrorism.

On the other hand, the map can be quite misleading because of its seemingly scientific invalidity. As GDPs fluctuate constantly, nations with GDPs that are close together might have to flip flop their positions on the United States map. As Dr. Salisbury carefully pointed out ‘maps are out of date as soon as they are created’. Indonesia and Norway, for example, were ranked 27th and 28th respectively and the difference between their GDPs was of only $300 million in 2007 (photius.com). A change in that perspective would challenge the map because Indonesia would switch from being assimilated with Louisiana to Minnesota and vice versa with Norway. Additionally, the map as a whole is deceptive in that the economies of the countries and the states are compared to each other without taking population into consideration. Again, Indonesia, for example has a population of over 246 million, more than 49 times the population of Norway, while their GDPs are only less than 0.1% apart from each other. As a result the viewer should be cautious as to what he takes out from the map since serious inconsistencies will result even a year after its production.

The straightforwardness of the map is a bold move because it has the potential to make it appear childish, putting its rhetorical speech in play. For instance, concealing any topographical information gives off an unscholarly impression that could discredit the map to the eyes of the viewer. At the same time it emphasizes the point of the map. There are no other symbols other than the outline of the states’ borders that could distract the viewer from the map’s objective. Only showing which nations are associated with which states highlights their subordination instead of dividing the attention with unnecessary data. Since the map was made by a private for-profit company, its goal is most likely purely revenue and persuasion oriented. The focus of the map is reached by keeping the focus on what is essential: linking similar GDPs together.

In short, the U.S. States renamed for countries with similar GDPs map is the ideal candidate for the map of the week as it sparks curiosity and contains a strong underlying argument. While appearing as playful and showing no scientific data, the map still impacts the viewer using an original way of comparing U.S. economic power with other countries. ‘Less is more’, and by leaving out what most maps include, the map’s hidden negative argument becomes more prevalent: the U.S. comes off as a superior force. The map reduces GDP as the only variable and encourages to believe that the economy around the world is driven almost entirely by America. In turn, superiority can be confused with ethnocentricity and arrogance. Strained foreign relations can be the result as the U.S. might step in conflicts where it feels like it has the right and responsibility to do so. By simplifying the world market and enclosing other countries’ economies into U.S. states, the map, whether it was York Group International’s prime intention or not, forces an outlook of the world where international influences are disregarded.

3 Responses to Map of the Week: US States renamed for countries with similar GDPs