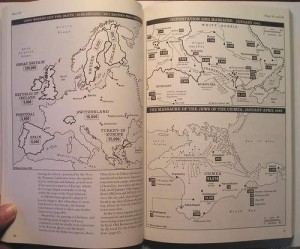 The Atlas of the Holocaust was produced after seven years of extensive research by Merton College, Oxford professor Martin Gilbert. The 316 maps in the Atlas document the Nazi attempt to annihilate the Jewish population in Europe during the Second World War. All the maps contained in the Atlas were drawn in black and white with clean and simple symbolism. They trace the early killing of Jews, the directions in which they attempted to escape, and the setting up of the camps, just to name a few. Gilbert methodically advances in chronological order to show the advance of the Allies and the slow, but steady evacuation of slave and death camps.