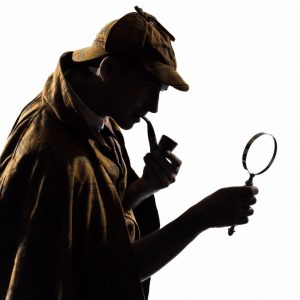 Can a nerdy detective become a hero? The answer is yes. There are many examples – Columbo, Ellery Queen, and Jessica Fletcher come to mind. But perhaps the greatest of these nerdy heroes was Sherlock Holmes.

Arthur Conan Doyle introduced the world to Sherlock Holmes in the 1887 novel A Study in Scarlet.  That mystery, and most of the subsequent ones, are told through the eyes of Holmes’ roommate and companion, Dr. John Watson.  The second novel, The Sign of Four, followed three years later.  Then in 1892 the first set of twelve short stories appeared, The Adventures of Sherlock Holmes.

But shortly after those were published Conan Doyle had had enough of his consulting detective and tried to kill him off in the last story of an 1894 collection The Memoirs of Sherlock Holmes.  That episode was called “The Final Problem.”

However, Conan Doyle couldn’t keep Holmes down.  There was too much popular demand.  His hero returned in “The Empty House,” the first adventure in the 1905 volume The Return of Sherlock Holmes.

Many of Holmes sayings from those early works are still famous today.  From The Sign of Four, “when you have eliminated the impossible whatever remains, however improbable, must be the truth.”  From the story “Silver Blaze” in The Memoirs comes Holmes’s unforgettable exchange with Inspector Gregory:

Gregory:  “Is there any other point to which you would wish to draw my attention?”

Holmes:  “To the curious incident of the dog in the night-time.”

Gregory:  “The dog did nothing in the night-time”

Holmes:  “That was the curious incident.”

The back and forth with Gregory was the basis for the prize-winning mystery novel The Curious Incident of the Dog in the Night-Time (Haddon 2003) and the play by the same name that opened at the National Theatre in London in 2012. 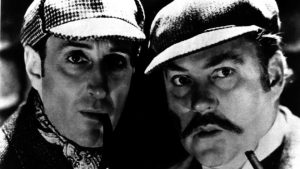 been constructed over the past one hundred years.  As we shall see, there is much more attention to their inner lives.  In the last decade of the nineteenth century Holmes was depicted in drawings in The Strand magazine by Sidney Paget.  A tall, aquiline Holmes image took hold, one largely consistent with Conan Doyle’s words.

Then the American actor William Gillette portrayed Holmes on the stage, in the famous deer-stalker hat first introduced by Paget, and his distinctive pipe.  Gillette even presented Holmes in a 1916 silent film that was only rediscovered in 2014.  Gillette continued the tall, lean and obviously cerebral presentation of Holmes.

Various other actors, notably Basil Rathbone, were cast as Holmes in film and on television during the mid-twentieth century.  Each actor shaped an evolving image, largely consistent with the original.  If the detective faded somewhat in mid-century he was brought back to life by Jeremy Brett in the Granada television series running from 1984-1984, and then by Stephen Spielberg’s 1985 film Young Sherlock Holmes.

The most recent renditions have been two television series, Sherlock on BBC with Benedict Cumberbatch and Martin Freeman (2010-2017) and the CBS series Elementary (2012-2019) with Johnny Lee Miller and Lucy Liu.  They reveal through the character of Sherlock Holmes and his companion John Watson the general evolution of recent treatments of famous fictional heroes, particularly with respect to issues of gender and sexuality.

In the Conan Doyle canon, Holmes left the “fairer sex” to Watson.  He never wanted emotion to disturb his detached rationality.  There is one fascinating exception however.  The first Holmes short story, 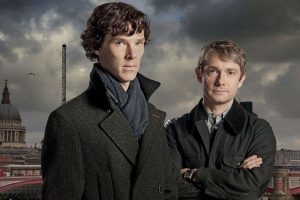 “A Scandal in Bohemia” begins with the famous sentence “To Sherlock Holmes she is always the woman.”  Clearly Holmes is smitten with her, one Irene Adler, and admires the fact that in the end she actually thwarts his plans.  Otherwise Holmes eschews attraction, eroticism, or any other emotion.

In contrast, issues of sexuality come up quickly in the BBC Sherlock series.  The character Mrs. Hudson, the housekeeper straight out of Conan Doyle, explicitly raises the possibility, even likelihood, that Holmes and Watson are a gay couple.  The Watson character, acted by Martin Freeman, laughs at such insinuations, but the issue never dies.

At least LBGTQ issues are acknowledged in the series.  Gender and sexuality play a larger role in Elementary.  First, Dr. Watson is a woman, Dr. Joan Watson, played to critical acclaim by Lucy Liu.  As a result, one feature of the whole series is tension as to whether the male Holmes (Johnny Lee Miller) and the female Watson will ever make a romantic, sexual connection (they don’t).

Furthermore, Miller’s Holmes has frequent trysts with one or more prostitutes.  His sexuality is highlighted.  For Conan Doyle, Holmes views sex and other emotions “as abhorrent to his cold, precise but admirably balanced mind.”  His work depends on avoiding or repressing feelings.  For Elementary, discharging libidinal drives serves to clear Holmes’ mind for the operation of his “cold, precise but admirably balanced” logic.

The many variations on the presentation and representation of Holmes all work as long as at the heart of the portrayal is the cool, precise logic, with a distinct dose of narcissism and even obliviousness bordering on the autistic.  The latter actually lends him an unconventional but clearly “good” morality.  He is good as well as strong and active.  Clearly the most recent adaptations reflect today’s current cultural concerns and conversations.  But the enduring elements have to fit as well.

In sum, audiences over the past century have found Holmes to be a convincing hero.  His acute mental abilities, his irreverent but dashing style, and his independence in judging the perpetrators of crime make him a compelling figure.  He doesn’t always follow the letter of the law, but he does act justly and humanely.  Our admiration for Holmes’ morality and talents, along with his unique and appealing personality quirks, ensure his long-term fame and heroism.