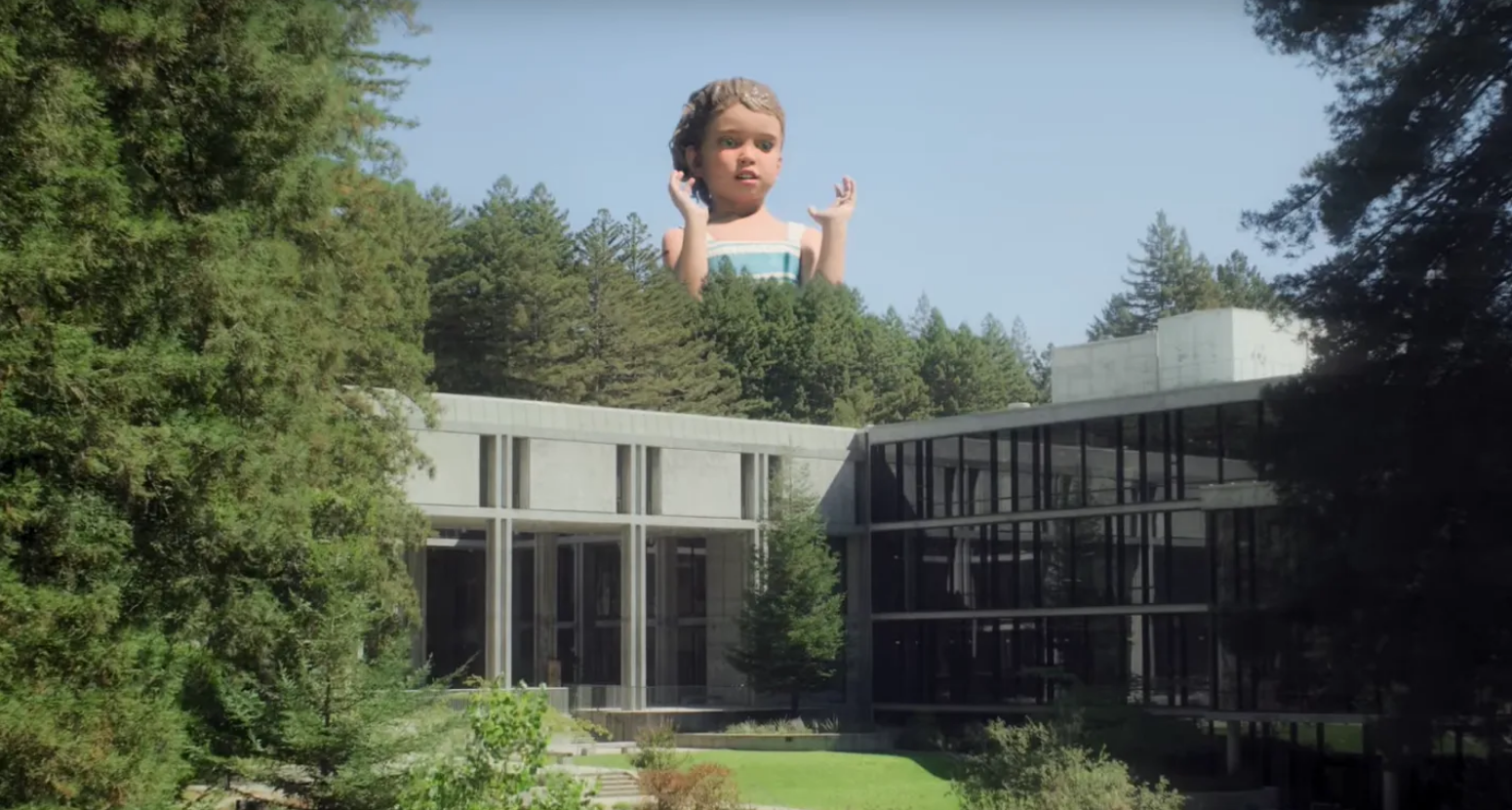 Devs is the ideal TV mini-series for people to sink their teeth into, for many reasons: (1) It’s both science and science-fiction; (2) it’s brilliant mix of psychology, philosophy, religion, and technology; (3) it tantalizes us with the mysteries of love, life, death, time, and space; and (4) it features a creepy 200-foot tall statue of a pre-school girl, which ordinarily would be cause for alarm until we realize that the girl symbolizes Devs’ paradox of our choices changing everything – and nothing at all.

I have to give writer Alex Garland tremendous credit for creating a universe, or rather a multiverse, that succeeds on many different levels. There are fabulous characters, specifically Lily and Jamie, whom we care about and who rise to the heroic challenge. Jamie hits the nail on the head in characterizing Lily as someone who doesn’t merely think about boldly taking actions – she takes bold action in situations where 99.9% of humans would not. That approach to life, dear readers, is the central essence of heroism. As her sidekick, Jamie is loyal to the core and uses his gifts to assist Lily on her hero’s journey.

But Devs is much more than a couple of heroes venturing on the mythic journey. It bestows us with an outstanding ensemble cast featuring generationally diverging Amaya coworkers Lyndon and Stewart; a charismatic, psychopathic villain in head-of-security Kenton; a pair of ethically shady billionaire tech giants in Forest and Katie; and a homeless dude named Pete who somehow worms his way into these people’s lives.

I was captivated by Devs from the get-go. We meet Sergei, and we like him. He’s got a lot of heroic potential – he’s young, smart, loving, loyal. 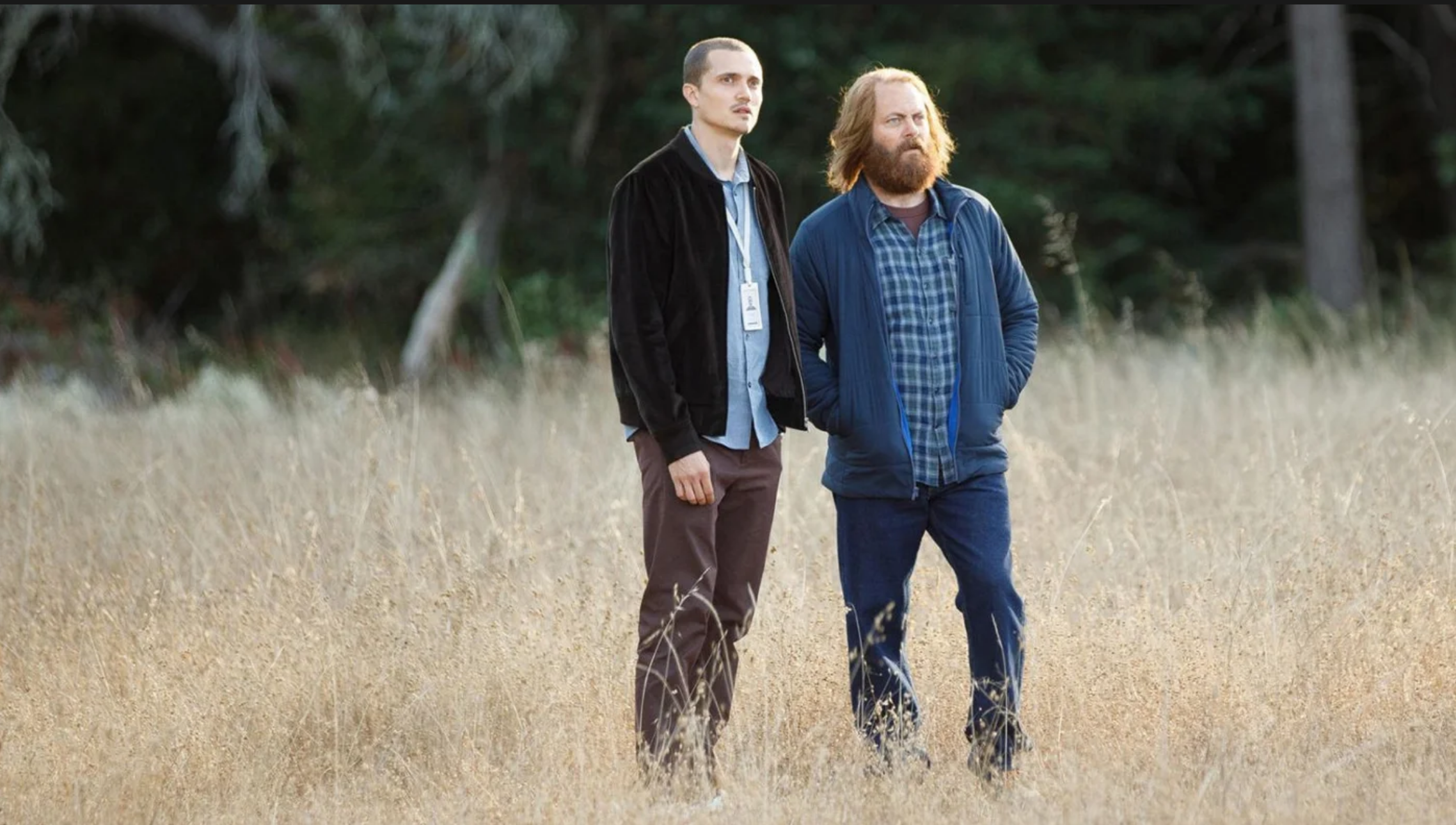 His girlfriend Lily has these same qualities and the two appear to have a close relationship. Amaya’s top secret Devs operation is shrouded in mystery. This element of mystery is a vastly underrated aspect of heroism and villainy. What role does mystery play? It inflames our heroic imagination. It especially ignites our imagination for the presence of potential evil.

Shameless plug time – in our last book, The Romance of Heroism, my co-author George Goethals and I discuss how the ways in which human beings resolve mystery can lead to extreme and biased conclusions about heroism, and especially about villainy. Here’s a brief overview of how this can happen.

The Devs unit at Amaya is mysterious and spawns rumor and speculation, even among government oversight committees. Forest’s instructions to Sergei on this first day at Devs are mysterious – he’s told to just look at code and he’ll know what to do, eventually. The mystery and the potential darkness of Amaya is heightened when we witness Sergei lose his lunch in shock after seeing some of the code. Sergei says, “This changes everything” to which Katie replies, “This changes nothing” — an exchange that offer only the slightest of hints about Devs’ true purpose. At this point, I was hooked and pretty much binge-watched all eight episodes of Devs in two days.

Devs features outrageously high production value. The music, in particular, lends a stylish note during key scenes such as Episode 2’s slow-motion fight between Kenton and Anton in the parking garage. Nick Offerman as Forest strikes just the right balance between brilliance and eccentricity, and between good and evil. I also enjoyed Alison Pill’s striking performance. She shows off her range here, portraying a brilliant scientist named Katie whose emotional control contrasts starkly to her portrayal of a similar scientist in Star Trek: Picard. I love that Katie’s intelligence exceeds that of Forest and that she calls the shots at Amaya as much as, and even more than, Forest himself.

Devs is to be commended for having three very strong female lead characters who drive the story forward. The series takes a big chance in casting Sonoya Mizuno as Lily, our primary hero of the story. Mizuno isn’t the most charismatic actor — yet, I’m going out on a limb by saying that she is the perfect person for this part. Let’s face it, Lily is a tech nerd, and I suspect that few tech nerds have the magnetism of a Meryl Streep or a Kate McKinnon. Her low-key approach is matched by that of Jamie, her sidekick and former lover. The inability of these two characters to communicate their thoughts and feelings was sometimes torture for me to watch, but their dialogue was also realistic in a less-is-sometimes-more kind of way.

Most of all, Devs succeeds in a sublimeway at the level of storytelling, weaving together a tapestry of mathematics, the natural sciences, the social sciences, and the humanities. I enjoyed witnessing the unfolding success of the Devs’ mission, which begins with the development of brief temporal simulations that can accurately expose both past and future. Soon it becomes more than just an exercise in simulations and evolves into an 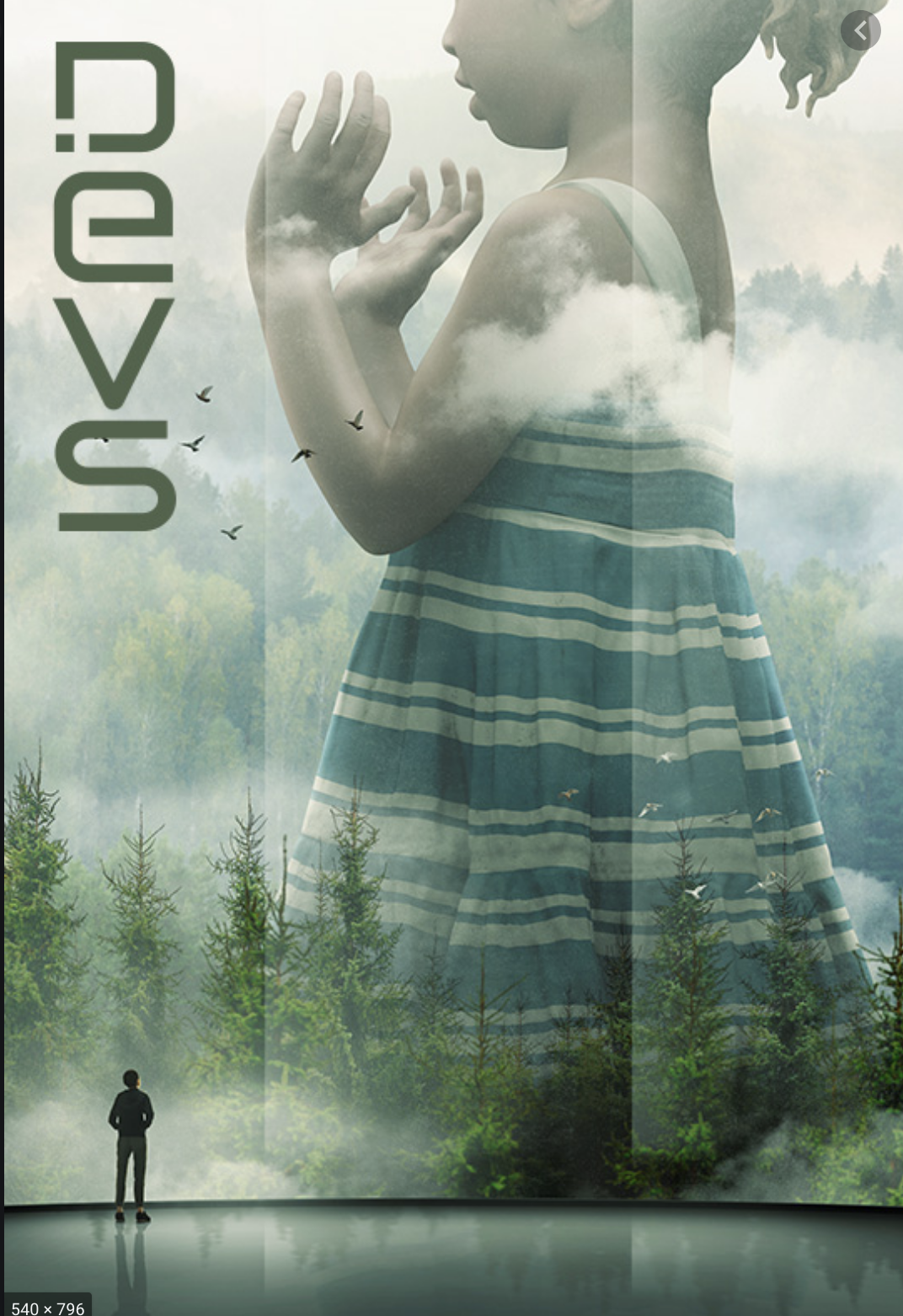 actual portal into our true past and into what seems to be our exact future. I love how Devs invites us into the philosophical argument about free will versus determinism and gives us data supporting both positions. Mustn’t the true reconciliation of the free will vs. determinism duality reside in its nonduality? Lily’s final actions in the last episode demonstrate the fallibility of taking an all-or-nothing position on this issue.

Episode eight’s Devs/Deus reveal is fabulous, building on the notion that Mark Zuckerberg, Steve Jobs, Bill Gates, and others are self-anointed Messiahs. I should have discerned the connection to Deus coming, as references to the god-like self-images of silicon valley executives are peppered throughout the entire series. But I didn’t see it coming and I credit Alex Garland for giving us enough clues without sledgehammering us.

So we’re left wondering whether we’re all living a “real“ life versus existing as computer simulations of ourselves. And as Stuart says, we could be a simulation existing within countless simulations because the Devs supercomputer exists in every multiverse. And as Forest says, what difference does it make whether our existence is real or a simulation? The laws of the universe work the same either way.

The Devs miniseries is a masterpiece and is a must-see for anyone who enjoys science, science fiction, psychology, philosophy, religion, and ethics. Alex Garland throws a lot of complex, interconnected human issues at us to disentangle. Lily is  pegged as “the chosen one”, the special someone around whom the fate of the entire universe resides, the person whose choices somehow break the prognostic ability of the Devs supermachine, the women whose “death” is visually reminiscent of that of Christ on the cross.

To be fair, Devs isn’t perfect. One could be critical of Pete’s identity as a Russian agent being a little too obvious. We know that Pete isn’t really a homeless man, and so the “big reveal” at the end is hardly a big reveal. A second criticism centers on why Lily and Jamie returned to her apartment after her escape from the mental institution. They had to know that Kenton would likely hunt them down and kill them. Jamie in particular, who was terrorized and tortured earlier by Kenton, should have been extremely reluctant to sit in Lily’s apartment waiting to be Kentonized — unless, of course, Lily and Jamie’s inability to alter their fate is the very point here.

Finally, I’m still not sure why Forest was so adamantly opposed to the multiverse idea. Surely Forest had to know that the multiverse theory, championed correctly by Lyndon, was the surest path toward achieving a reunion with his daughter. Perhaps Forest could not bear any universe or existence in which his daughter dies. The vindication of Lyndon is Forest’s salvation, all made possible by Lily’s “original sin” of disobeying Deus, an act that ultimately leads to Resurrection. None of these pieces fit together perfectly but they blend together just well enough to give us much to ponder.

Overall, our hero Lily traverses the hero’s journey in exemplary fashion. Unaware of her true identity as the key to the resurrection of the universe, she has to undergo enormous suffering to come to an understanding of her central role in everyone’s fate. Her ability to exercise her freedom of choice, at a pivotal time, makes her a hero in the very best sense of the word. She enlists the aid of a sidekick and uses an avalanche of adversity to transform herself into a courageous, resilient, resourceful hero who saves the world.

Here you can check out our full Reel Heroes review of Devs.