Throughout the long course of Buddhist thought and practice, two role models have dominated the landscape—the Arhat and the Bodhisattva.  For the early Buddhists, the consummation of a human lifetime derived from a withdrawn, often monastic, existence marked by poverty, chastity, and obedience.   The successful monk or nun who realized nirvana became an Arhat.  For the later Mahayana Buddhists the ideal life changed into one marked by involvement in the world, an engaged life infused with wisdom and compassion—the latter often spoken of as highly skillful teaching of the Mahayana way.  The man or woman achieving this enlightenment became a Bodhisattva and potentially a veritable Buddha.

The popular and famous Vimalakirti Sutra, written in India around 100 CE in Sanskrit and translated into Tibetan in the 8th century and into Chinese seven times between the 2nd  and 7th  centuries, tells of a miraculous episode in the life of a legendary Bodhisattva living in the city of Vaishali.

Vimalakirti is a rich man, not a monk,  He has a home, a wife, children, relatives, and servants.  He dresses fashionably, eats and drinks like others.  He visits gambling parlors, listens to discussions about other religions, knows secular literature, conducts all kinds of business transactions and reaps profits.  He visits government offices and courts of law. He enters brothels and wine shops.  He is familiar with every level of citizen.  In all of this his motive is to use skillful techniques and expedient means best suited to the people he meets to bring them the relief that is the goal of the Mahayana Buddhist way.

To accomplish this on what quickly becomes a grand—even cosmic—scale Vimalakirti makes it appear that he has fallen seriously ill.  This gambit is very apt because the fact of illness, and the goal of health, is central to the Buddhist view of the human condition.  The first noble truth articulated by Shakyamuni Buddha on the night of his enlightenment is that human life is marked by suffering, perhaps better 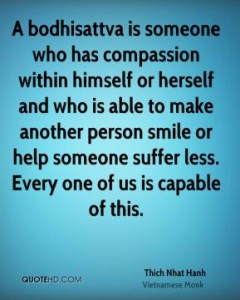 put as disease or dis–ease.  The remaining three Noble Truths spell out for early Buddhists the way to cure this dis—ease.

For Mahayanists the cure is not the monastic way of the early Buddhists.  Vimalakirti counsels Subhuti, a famous early disciple of  Shakyamuni Buddha, on what constitutes real merit far beyond begging for one’s meals.

“Subhuti, if you cannot cut yourself off from lewdness, anger, and stupidity and yet not  be a part of these . . . ;  if without wiping out stupidity and attachment you can find your way to understanding and freedom from attachment; if you can seem to be a perpetrator of the five cardinal sins and yet gain emancipation . . . ; if in this manner you can master all phenomenal things and yet remove yourself from the ways that mark them, then you will be worthy to receive food.”

The Bodhisattva way is to be in the world but not of it, to know this, and to work toward understanding the implications of this truth.

Later Vimalakirti instructs Manjushri, a cosmic Bodhisattva representative of perfect wisdom, that illness springs from deluded thoughts, the upside-down thinking and desires of  one’s human past, remembered and forgotten,

“Manjusri the ailing Bodhisattva should go about regulating and controlling his mind.   By doing so he cuts off the suffering of old age, sickness, and death. . . .  A person who has overcome a sworn enemy deserves to be called a hero in the same way one who has overcome old age, sickness, and death may be called a bodhisattva.”

The Bodhisattva is an enlightened hero whose essence is skillful teaching by word and example that leads people to emancipation from the ever accumulating anxieties, errors, and stress of the human condition.

As a final note, however, it’s important to say that the Vimalakirti Sutra adds spectacle, humor, and drama to edifying doctrine.  The primary climax of the work is a stunning pause known as the thunderous silence of Vimalakirti, his non-response to a flood of abstruse observations by 31 members of the vast multitude of beings, cosmic and human, housed miraculously in his little room.  It is a powerful reminder that the most profound truths are beyond words.  Silence here is eloquent.

But wait there’s more.  Immediately following this Shakespearian moment, Sariputra, a very well-know early disciple of the Shakyamuni Buddha, provides wonderful comic relief when he thinks to himself, “it’s almost noon, what are all these Bodhisattvas going to eat?”   His mind is on lunch.  This is not the first time he fails to grasp the profundity of what is happening around him with great comic results.  There are other wonderful moments like this throughout the work that explain the great popularity that accompanies the fame of the Vimalakirti Sutra’s edifying lessons.

Richard Mercer has been a Visiting Instructor of English and Core (especially Edgar Allan Poe and Samuel Beckett) at the University of Richmond. He has studied Buddhism since the early 1990s. Only recently has he realized that the Bodhisattva ideal is a wonderful and practicable model to follow.

2 thoughts on “The Bodhisattva: Buddhism’s Hero of Wisdom and Compassion”