As we pass the anniversary of the September 11th attacks, Americans continue to experience a range of strong emotions.  There remains deep sadness about the losses suffered that day.  Many of us are still trying to come to terms with the toxic mix of political, theological and economic conditions that fed the terrorists’ hatred.  And there continue to be reaffirmations of the goodness, resilience, and courage of America and its citizens.

One of the ways we have coped with the tragedy is to remember the heroes who stepped forward that day.  Many paid the ultimate price to combat the terror and help us get back on our feet.  In the words of Abraham Lincoln, “they gave the last full measure of devotion.” There were numerous such heroes in New York and Washington, DC. 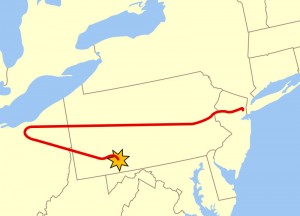 But few made as much difference as the passengers on United 93.  Their story will be remembered for as long as this nation survives.

United Airlines Flight 93 was bound from Newark, New Jersey to San Francisco that brilliant Tuesday morning.  It was delayed for about 45 minutes due to air traffic congestion, finally taking off at 8:42 AM.  Four hijackers began their takeover at 9:28 AM.  By that time the two flights from Boston had crashed into the World Trade Center.  The Pentagon would be hit in a few minutes.

During the hijacking itself, the four men apparently killed the pilot and co-pilot, and herded the passengers into the back of the aircraft.  Luckily, some passengers and flight attendants were able to use cell phones or airphones to call family members or contact GTE operators.  Slowly, what had happened at the World Trade Center and the Pentagon came into focus.

Many passengers’ relatives tried to console their loved ones, and saying that everything would be okay.  Intense fear very frequently leads to denial.  Initially both those in the air and those on the ground had difficulty coming to terms with the fact that the plane was on a suicide mission.  Once that was clear – and it became clear to those on the plane before those on the ground – the passengers reacted quickly. 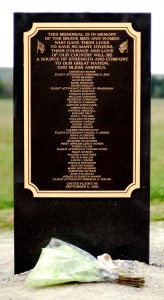 It’s a good thing.  When the plane crashed, it was only twenty minutes from Washington, DC.

We don’t know who organized the counterattack.  It began at 9:57 AM.  The passengers voted to break into the cockpit to try to retake control of the plane.  Flight attendants helped.  One called her husband and told him that they were preparing boiling water to throw at the hijackers.  And we don’t know exactly how the passengers overwhelmed the hijackers and breached the cabin.

But the last words of one man are iconic.  They were overheard by the GTE operator he had reached by airphone:  “Are you guys ready?  Okay.  Let’s roll.”  It sounds like a line from a movie, but it happened to real people acting under the most terrifying circumstances imaginable.  They knew they were going to die.  But they wanted to prevent more death and destruction in the nation’s capital.

Most experts believe that United 93’s target was the Capitol building itself, though it may have been the White House or Camp David.  The hijackers’ mission failed due to acts of heroism that are as unalloyed as they come.  The nation will be forever grateful to the heroes of United 93.

Do you have any heroes you would like us to profile?  If so, please contact Scott Allison as sallison@richmond.edu.