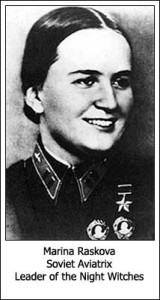 There was a controversy in the early 1990s. U.S. Secretary of Defense Les Aspin announced in 1993 that for the first time in US history, women would be allowed to fly combat missions. It was a field that was traditionally dominated by men and by that date there were still many who felt that it should remain that way. The debate played out in the nightly news and in television shows ranging from JAG to Northern Exposure. Even a close family member of mine, who was a veteran of the second World War and had a long Naval career, expressed mild opposition to it.

But it was a controversy that should never have happened for the simple reason that woman had flown combat missions before and had done it successfully during World War II. Not in the United States, where most are aware of the non-combat Women’s Army Corp (or WACs), but in the Soviet Union.

In the summer of 1941 Russian aviatrix Marina Raskova was tasked with forming a regiment of night bombers to conduct strikes against German positions. 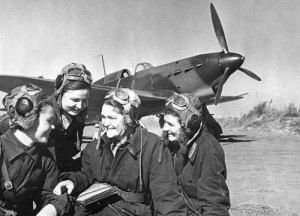 This tactic was known as harassment bombing. Raskova in turn formed a unit composed entirely by women, from the mechanics to the pilots themselves and the 588th Regiment was born.

During the course of the war the squadron would fly some 23,000 sorties and drop an estimated 3000 tons of bombs. Impressive for a regiment that at its height only had 40 two-person crews. Impressive enough that it was the Germans who gave them their name:  Nachthexen, or Night Witches. Even more amazing was that the Night Witches were given obsolete Polikarpov Po-2 biplanes, aircraft that were originally designed for crop dusting and training, to conduct their operations in.

And really this is where the Night Witches were truly inspirational. Not only because they were among the first at something, or unsung, or overcame adversity (though they deserve recognition for all of that).  It is because they turned that adversity into advantage. While the Po-2s were slow, lightly armed, and vulnerable the Night Witches found that they did have their advantages. The slow air speed of the plane often placed them below the stall speed of the German fighters sent to attack them. The slow speed also allowed the pilots to fly close to the ground and use trees and buildings as cover. 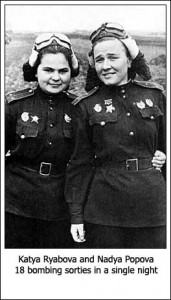 And being biplanes the Night Witches could shut their engines off and silently glide to their targets, effectively performing some of the first stealth bombing missions. The Germans would often have no idea an attack was coming until the bombs were dropping.

However, after the end of the war the women pilots found their opportunities increasingly limited. Politics of the Cold War kept their exploits from western attention. But as their lesson is now too late for the debate of 1993, we can still learn from them and others who went before. Whenever a society or a culture or a stereotype insists that this group or that group cannot do something there will always be an example from history to refute the notion. Be it an ethnic group striving for new opportunities, or a religion group seeking to live their lives peacefully, or a gender who can defend their country with the same valor as their counterparts.

The author, Jesse Schultz, is a life long admirer of aviation, history, and women- though not necessarily in that order. His previous musings on heroism include Love Thy Enemy: Opposing Heroes.  His previous blogs on Merlin and The Makers of Fire will appear in our new book Heroic Leadership: An Influence Taxonomy of 100 Exceptional Individuals.