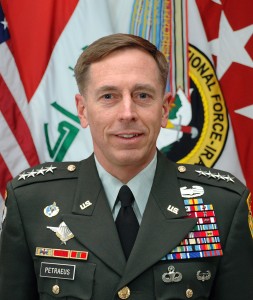 In a recent New York Magazine article, Frank Rich argues that no one should have been surprised at the downfall of highly decorated U.S. Army General and CIA Director David Petraeus.  After the reputational demise of so many heroes before him — Tiger Woods, Lance Armstrong, and Joe Paterno, to name a few — why should we have expected anything different from Petraeus?

According to Rich, “What’s really shocking about the Petraeus affair is not Petraeus’s affair but the fact that once again, we were taken in by a secular plaster saint who turns out to bear only a faint resemblance to the image purveyed by the man himself and the mass media that abetted his self-glorification.”

Rich’s essay raises many interesting questions:  Why do people we admire tend to succumb to repeated moral failings? Do we expect moral perfection from those who show great competence in one sphere of life?  Why do we conveniently overlook the obvious fact that all human heroes are inevitably as human as they are heroic?  And then why do we seem to punish heroes more for their human foibles than we do non-heroes?

Prior to their downfall, we personally never imagined Woods, Armstrong, or Petraeus to be perfect individuals.  Perhaps people are too quick to assume that greatness in one realm implies (however naively) greatness in all realms, including — and perhaps especially — morality. Our thirst for heroes may be so urgent that we cannot help but harbor unrealistic impressions of their universal virtue. 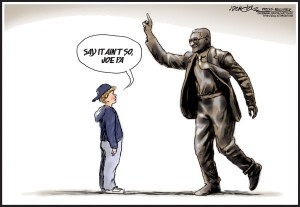 In our first book on heroes, we discuss how the higher standards we hold for heroes make it easier to topple them from their pedestals.

Rich also reminds us of the often-heard speculation that ever since the Watergate scandal of the early 1970s, public figures’ misdeeds are sought out by the media rather than covered-up by them.  Untarnished heroes of yesteryear, such as George Washington, JFK, and FDR, were probably as riddled with flaws as were Paterno and Patraeus.  The media of their day simply placed a higher priority on building heroes than on tearing them down.  We recommend Susan Drucker’s book, American Heroes in a Media Age, for a cogent analysis of this topic.

Lost in all the media frenzy about the many recent fallen heroes is the observation that many, many extremely successful people (and heroes to many) continue to maintain almost impeccably clean moral reputations.  These individuals come from all walks of life and a partial list of them includes Coach K at Duke University, Bill Gates, Oprah Winfrey, Barack Obama, Meryl Streep, Stephen Hawking, and Michael Jordan.  Frank Rich’s essay suggests that it may only be a matter of time before at least a few of these icons crumble.  We hope he’s wrong.

6 thoughts on “Do We Expect Too Much From Our Heroes?”