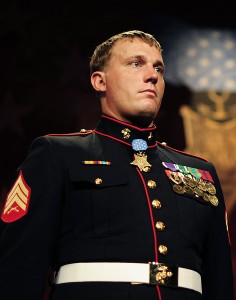 The war in Afghanistan is currently the longest war in U.S. history.  Americans have gotten used to very little good news coming out of that region of the world, but recently there was something to cheer about.  A U.S. Marine Corps veteran named Dakota Meyer performed a remarkable feat of heroism and received the Medal of Honor, the highest military decoration one can receive.  Meyer distinguished himself by demonstrating “conspicuous gallantry and intrepidity at the risk of his or her life above and beyond the call of duty while engaged in an action against an enemy of the United States.”

Here are the stirring details.  On September 8, 2009, Sergeant Meyer was serving his country in Afghanistan when he heard on his radio of a Taliban attack on a nearby village.  Members of his unit and a number of allied Afghan fighters were being bombarded by enemy fire.  He repeatedly asked his superiors for approval to assist those under attack, and he was repeatedly denied permission to do so.  It was simply too dangerous, and Meyer was heavily outnumbered.

Defying orders, Meyer headed into the besieged village. He first encountered several wounded allied Afghan fighters. He transported them to safety and then headed back into battle.  During the next several hours, Meyer entered the “kill zone” five times, rescuing 23 Afghans and 13 Americans.  He was under heavy enemy fire the entire time from a numerically superior foe. 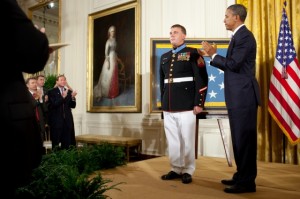 Despite receiving shrapnel wounds to his arm, Meyer was able to kill at least eight Taliban while evacuating his fellow Marines to safety.

During one of his trips into the village, he stumbled across the bodies of four of his teammates killed by gunfire.  “I checked them all for a pulse. Their bodies were already stiff,” Meyer said.  Meyer made the decision to bring his friends back home. Bleeding from his shrapnel wound and still under fire, he carried their bodies back to a Humvee with the help of Afghan troops.

Meyer has said that he expected to die that day.  He also remains quite humble about his heroism, focusing instead on the guilt and pain of not being able to save the lives of the four men whose bodies he collected. “It’s hard getting recognized for the worst day of your life.  It’s a really tough thing,” Meyer said.  “There’s not a day — not a second — that goes by when I don’t think about what happened that day.  I didn’t just lose four [colleagues] that day; I lost four brothers.  I went in there to get those guys out alive, and I failed. So I think it’s more fitting to call me a failure than a hero.”

During the Medal of Honor ceremony, President Obama addressed Meyer’s obvious heartache. “Dakota, I know that you’ve grappled with the grief of that day; that you’ve said your efforts were somehow a failure because your teammates didn’t come home,” Obama said. “But as your commander-in-chief, and on behalf of everyone here today and all Americans, I want you to know it’s quite the opposite. You did your duty, above and beyond, and you kept the faith with the highest traditions of the Marine Corps that you love.  Because of your honor, 36 men are alive today.”

Below is a clip of the Medal of Honor being awarded to Dakota Meyer.

5 thoughts on “Dakota Meyer: The Hero Who Defied Orders to Save Lives”