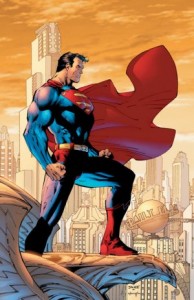 It actually seems strange that so few of our blogs here have been devoted to superheroes.  By definition, they are the perfect representation of the way people think about heroes.  They have all the key personal attributes.  In our book, we reported the traits that research participants used to describe heroes.  We called them the Great Eight.  And Superman, the quintessential superhero, illustrates them better than almost anyone.  The “Man of Steel” who “fights a never-ending battle for truth, justice, and the American way” is Strong, Smart, Selfless, Caring, Charismatic, Resilient, Reliable and Inspiring.  Perhaps Superman’s most obvious heroic characteristic is Strong, but he does pretty well on all the others.

So it would seem that there would be little need to embellish the myth further, and make Superman a Transfigured Hero.  Yet one of the most interesting recent portrayals of Superman does exactly that.  In the 1991 music video by the band Crash Test Dummies, Superman’s Song is a dirge sung at the Man of Steel’s funeral, with some aging superheroes in attendance.  One of them appears to be a slightly overweight, middle-aged Wonder Woman and another might be an elderly Green Lantern.

The song’s chorus emphasizes Superman’s selflessness:  “Superman never made any money, for saving the world from Solomon Grundy.”  That characterization is not particularly new. 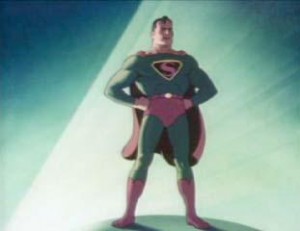 But a twist on the selflessness theme suggests that Superman had to overcome temptations to stay on the straight and narrow.  Heroic narratives recount the ways our heroes struggle to overcome obstacles, both internal and external.  There weren’t many external obstacles that really tested Superman, but resisting such deadly sins as Greed and Sloth suggests overcoming internal ones.

Regarding greed, the song claims that Superman “had a real job, even though he could have smashed through any bank in the United States, he had the strength, but he would not.”  Regarding sloth, we hear “sometimes when Supe was stopping crimes, I’ll bet that he was tempted to just quit and turn his back on man.”  But not Superman.  He “stayed in the city, kept on changing clothes in dirty old phone booths €˜til his work was through.”

But the most interesting element of the song presents Superman as a refined gentlemen, in great contrast to another fictional hero, the crude Tarzan.  After lyrics claiming that “Tarzan was no ladies’ man” and that he would just “scoop €˜em up under his arm like that, quick as a cat,” we hear:  “Clark Kent, now there was a real gent.”  While the King of the Jungle “could hardly string together four words, I Tarzan, You Jane,” Superman “would not be caught sittin’ around in no junglescape, dumb as an ape, doing nothing.”

Thus this song not only mourns the death of Superman – “the world will never see another man like him” – but adds a new element to the narrative, one describing a cool, kind, sensitive, almost feminist strong man, who though weary remains true to the “never-ending battle.”  While sometimes he considered escaping the pressure of being our rock solid superhero, to “join Tarzan in the forest,” he stayed Resilient and Reliable to the end.  No wonder he is so Inspiring.  And a real gentleman to boot.

Below is a clip of the Crash Test Dummies video of  Superman’s Song.