One of the most compelling actions that a hero can perform is an act of redemption.  A redeeming act is any behavior that corrects a previous misstep or wrongdoing.  Redemptive acts are common occurrences in athletic competitions, as when a football placekicker boots the winning field goal after botching a kick the previous week.  Especially powerful instances of redemption are great acts of morality that follow prior moral transgressions.  This type of moral redemption is portrayed in a most poignant way in Groundhog Day, a movie released in 1993 starring Bill Murray and produced by Harold Ramis.

At first, Connors uses the repetition of the day to steal money and to manipulate women to sleep with him. 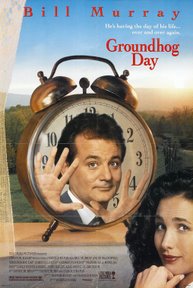 Yet the one woman he grows to love, his producer Rita, won’t succumb to his advances.  Connors grows depressed when he realizes that his methods will never allow him to achieve real intimacy with Rita. He becomes suicidal, believing he is stuck, alone forever, in a dull town on an endlessly cold winter day.

Connors’ road to redemption begins when he honestly confides to Rita what is happening to him.  She shows him great empathy, suggests that his plight may actually be a gift, and for the first time spends the entire day with him.  When Connors awakes to repeat yet another February 2nd, he is a new man.  He takes piano and ice-sculpting lessons.  He helps a poor homeless man.  He saves a boy from a bad fall, performs the Heimlich maneuver on a choking victim, and fixes an old woman’s flat tire.

Rita witnesses the change in Connors and falls in love with him.  The arrogance and selfishness that once characterized him have been replaced by kindness, enlightenment, and a drive to make the best out of one’s circumstances.  At the end of the day, they fall asleep, in love and in his bed.  And when Connors awakes, she is still there, it is finally February 3rd, and the cycle has been broken.  Connors’ long redemptive journey has been completed.

Over the years, Groundhog Day has received high acclaim from both critics and audiences. The movie has found its way onto Roger Ebert’s “Great Movies” series.  In 2009, the American literary theorist and legal scholar Stanley Fish named the film one of America’s all-time greatest movies. In 2006, the film was added to the United States National Film Registry for being “culturally, historically, and aesthetically significant.”

Groundhog Day‘s story of redemption moves many people deeply, a reaction that caught director and producer Harold Ramis by surprise. 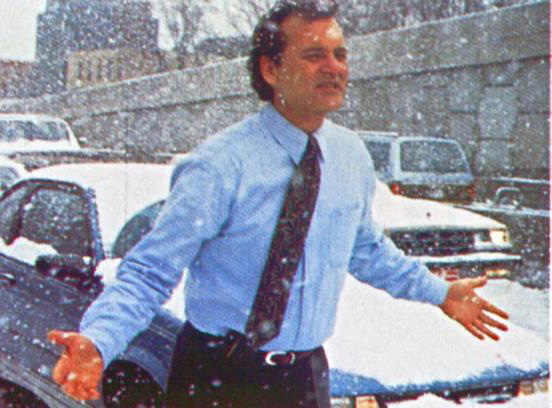 “This movie spoke to people on a lot of levels,” said Ramis. “The spiritual community responded to this film in an unprecedented way. Hasidic Jews held up signs outside of theaters asking, ‘Are you living the same day over and over again?’  Then I started getting letters from the Zen Buddhist community, the Yoga community, the Christian fundamentalist community, the psychoanalytic community, and everyone claiming that this was their philosophy and that I must be one of them for having made this movie.”

The story of a hero’s redemptive journey has universal appeal and touches something powerful inside the human psyche.   To legions of people, there is great spiritual significance in Bill Murray’s unforgettable portrayal of the hero Phil Connors.  Groundhog Day suggests that all of us, whatever our flaws or circumstances, can redeem ourselves.

Below is a clip from the movie, showing Phil Connors’ inept attempt to woo Rita before embarking on his journey of redemption.