In our previous blog on Joseph Campbell, we noted how the stories we construct about heroes tend to reflect both our deepest fears and our dreams of conquering them.  Heroes demonstrate for us how the best attributes of humanity can overcome the most daunting challenges that life throws at us.  As Campbell observes, nearly all hero stories follow a general structure that involves the hero's call to adventure, a set of hurdles for the hero to overcome, and a transformation of both the hero and the society in which he or she lives.

The new ABC television series, No Ordinary Family, borrows the key elements from all the classic tales of heroism throughout ages.  In the show, the Powell family is portrayed as an average American family, slightly dysfunctional but also likeable.  Their "average-ness" is crucial; it enables us to relate to them and to whimsically entertain the notion that what happens to them could also happen to us.  As with many superhero tales, the Powell's adventure begins with a traumatic event.  For them it is a plane crash in a remote South American lake that exposes them to an unusual, magical substance in the water.

The show's fun lies in how each member of the family gradually discovers his or her individual superpower.  Jim Powell, the father, finds that he now has the reflexes to catch a bullet fired from a gun.  Humorous scenes feature him discovering other super-skills such as the ability to leap tall buildings in a single bound. 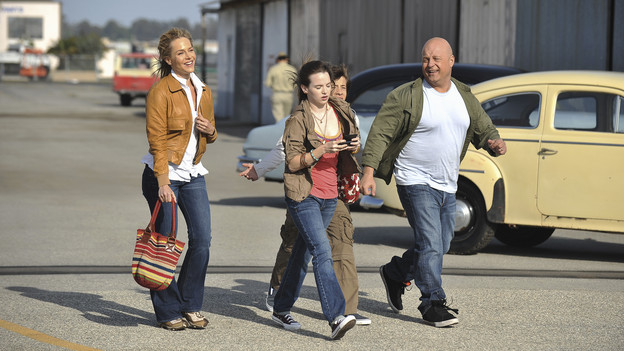 His wife Stephanie, while rushing to make an appointment, discovers she can run at the ludicrous speed of over 700 miles per hour.  Why do we resonate to heroes with super powers?  According to Joseph Campbell, a central part of the hero archetype is the idea that our heroes have supernatural aids.  Superheroes, by definition, can do magical things that ordinary people cannot.

In contrast to the two adult Powells, who have acquired physical superpowers, the two Powell children discover that they have developed superior mental acuities.  Daphne, the teenage daughter, realizes that she can read people's minds, and the son, J.J., is transformed from a below-average student into a super genius.  In keeping with stereotypical superhero tradition (e.g., Iron Man), Jim Powell's sidekick is an African-American, a friend named George.

In almost all superhero stories, the hero's superpowers are necessary to fight extraordinarily powerful criminals.  No Ordinary Family is no exception.  Jim Powell encounters a series of villains who also possesses extraordinary physical powers, making the fight between good and evil a suspenseful undertaking with (at first) no clear victor.  All superheroes also possess a vulnerability.  It turns out that the Powell family members are fallible humans in most ways.  Moreover, having only recently acquired their superpowers, the Powells are unaware of the limits their super-skills and how to best use them.

The proliferation of superhero stories, in comic books, movies, and television shows, is staggering.  What is the allure of the superhero?  At the end of the first episode of No Ordinary Family, Jim Powell tells us that "the problems we face may not be ordinary. But then again, neither are we."  With this line, Powell has precisely captured the universal appeal of superheroes.  An inescapable reality of life is that we often must face fearful circumstances beyond our control, circumstances that require remarkable courage and strength for us to prevail.  Extraordinary problems require extraordinary solutions.  Superheroes are exactly the tonic we dream of when life punches us in the gut.

Below is the trailer for the pilot episode of No Ordinary Family.

12 thoughts on “No Ordinary Family: The Latest TV Superheroes”