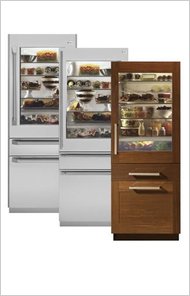 Scientists continue to discover gases more damaging to the atmosphere than carbon dioxide. GE just announced Tuesday it will be the first refrigerator producer to eliminate a gas called HFC (Hydroflorocarbon) 134a from its frig insulation materials. HFCs have 1,430 times the global warming potential of carbon dioxide.

Before using HFCs, frig manufacturers used CFCs as a blowing agent and refrigerant. But then CFCs were banned because of their effect on the ozone. Were HFCs that great of a replacement?

GE is the first frig manufacturer to propose eliminating HFCs from their processing. One potential replacement gas is cyclopentane, a hydrocarbon molecule with a global warming potential of 3 to 10. GE has already converted one factory to cyclopentane, which will eliminate 400,000 metric tons of carbon dioxide per year (equivalent to 78,000 cars taken off the road).

Frig companies are also working to recapture some of the harmful gases still locked in the insulation of trashed refrigerators.

The question(s) is(are) then, (a) why didn’t they replace CFC with cyclopentane back in the 1970s?, (b) are scientists going to discover some environmentally damaging impact of cyclopentane 20 years from now?, and (c) is anyone designing a carbon neutral refrigerator?

2 thoughts on “When Refrigerators Warm the Planet: GE’s Frig Reforms”