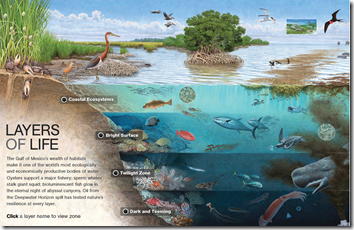 The National Geographic website has a new interactive feature on life in the Gulf after the oil spill.  The graphic first allows users to select a layer of life that includes: the coastal ecosystems, bright surface, twilight zone, and dark and teeming.  Once a user selects the layer they prefer, the site opens up a new picture depicting the different forms of life found in this layer.  The user can then select the different plants and animals that live in the chosen layer, causing a description to pop up about its impact on the region and general information on the species. The site allows the user to learn about the different plants and animals that live in the gulf–many of which the average person is not familiar with.

The neat aspect of this interactive map is that it not only gives the user an in depth look at each layer of life, but it also shows how different specifies continue to be affected by the oil spill.  The site states that the golf oil spill has, “tested nature's resilience at every layer.” 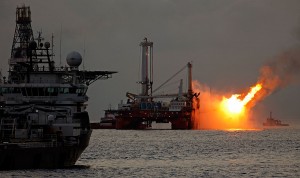 While the disaster occurred many months ago, the impact on the biodiversity of the region continues to be seriously harmed.  It was the largest marine oil spill in the history of the petroleum industry and plants and life forms are still recovering even almost a year later.  Many people in the region rely on the productive biodiversity for economic reasons, as thousands of fisheries going out of business.  The Gulf Oil spill was something we should never forget, and this interactive map reminds us of how diverse the region is, hopefully leading us to find other places for deep water drilling.

Enjoy the link below to explore life in the Gulf!