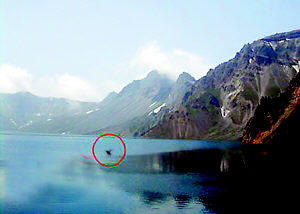 As we have learned in class, Lake Baikal is the largest lake in the world; it is home to many species of plants and animals. This site explains why it is no surprise that a possible lake monster resides somewhere in the depths of this enormous freshwater lake. There have been many eyewitnesses to what is described as a “sturgeon-like monstrosity” with a cross between a seal-like mammal. Some theories of origin include the land locking of the beast within the lake as a result of the last ice age, possibility of a sea-serpent swimming up one of the many rivers or streams that feed into Lake Baikal, or the most popular of all theories, a remarkable mutation caused by the pollutants released into the Lake. The Baikalsk Pulp & Paper Mill is the largest contributor of pollution into the lake, this company “has dumped approximately 210,000 cubic meters of untreated waste into Lake Baikal every day since 1966.” Though scientists have not been able to apprehend and study this unknown monster, the possibility of its existence is highly likely since the bottom of Lake Baikal has not been explored to this day, which may contain many undiscovered species.

2 thoughts on “Monster in Lake Baikal”