“Most people here already wear masks. I don’t have one yet since there aren’t any in the pharmacies.”

My heart sinks. My grandma, in Granada, Spain, keeps talking.

“To go to the grocery store, I put latex gloves on,” she says. And when she gets there, she waits in a line that extends “for kilometers. When you finally get into the store, you put other gloves on top of the ones you’re already wearing. You get hand sanitizer.” And when she gets home, she disinfects everything she’s just bought with soap and hot water. “No one wants to die,” she says, laughing.

That’s grocery shopping in Spain right now: Visiting the store rarely, buying a lot, protected with just a mask and a pair of gloves. And for many of the people I know, a trip to the grocery store is not worth the risk.

Spain has been especially hard-hit by the virus. Since the first case was reported in the Canary Islands on January 31, the numbers have grown exponentially: 172,541 infected, with 18,046 deaths. At this writing, my hometown, Valdemoro, has registered more than 500 cases and more than 40 deaths.

Things are a little different here in Annapolis, where the numbers are slowly rising. Yet when I hear these stories from my friends and relatives back home, I feel I’m not where I’m supposed to be.

My family. Just a few days to see them again.

I am far from home, staying with a host family, the Duny’s, whom I’ve known for over four years. My flight home is a month away, in May. In the meantime, I’m counting my days left in the U.S., living in a community where I still enjoy some freedom of movement but think constantly of my family and friends in Spain.

“We order online with glovo, so they bring the groceries to your home,” my aunt tells me, from her home in Madrid. “They leave them at the door. I get the gloves on, spray the groceries and clean them with a rag. Imagine having to clean everything with soap—so boring!”

Her brother, my uncle Juanito, thinks a trip to the grocery store is worth the risk. Or maybe groceries are just an excuse for him to escape from home and get fresh air. Out there the fear is everywhere.

“You see someone in the streets and he steps back three meters away, and you get three meters away too,” he tells me on a phone call. “The other day I went to the grocery store, and there was an old man coughing, and then another one coughed, and I thought, ‘those bastards are gonna give me everything.'”

Maryland and Spain: Everyone’s lives have changed with confinement. As far as I can tell, my neighbors in Annapolis are keeping it together. In Spain, though, people are not only losing their jobs, but their minds too.

To escape the monotony of confinement, the Spanish seem to have agreed that every day will be Halloween.

“Yesterday we saw a man dressed up like an elf, taking his trash to the public bin,” my cousin texted me. My aunt and her boyfriend Daniel put on costumes for anything resembling a special occasion. “We do video calls with Dani’s friends and dress up, because there are kids, to laugh a little.” 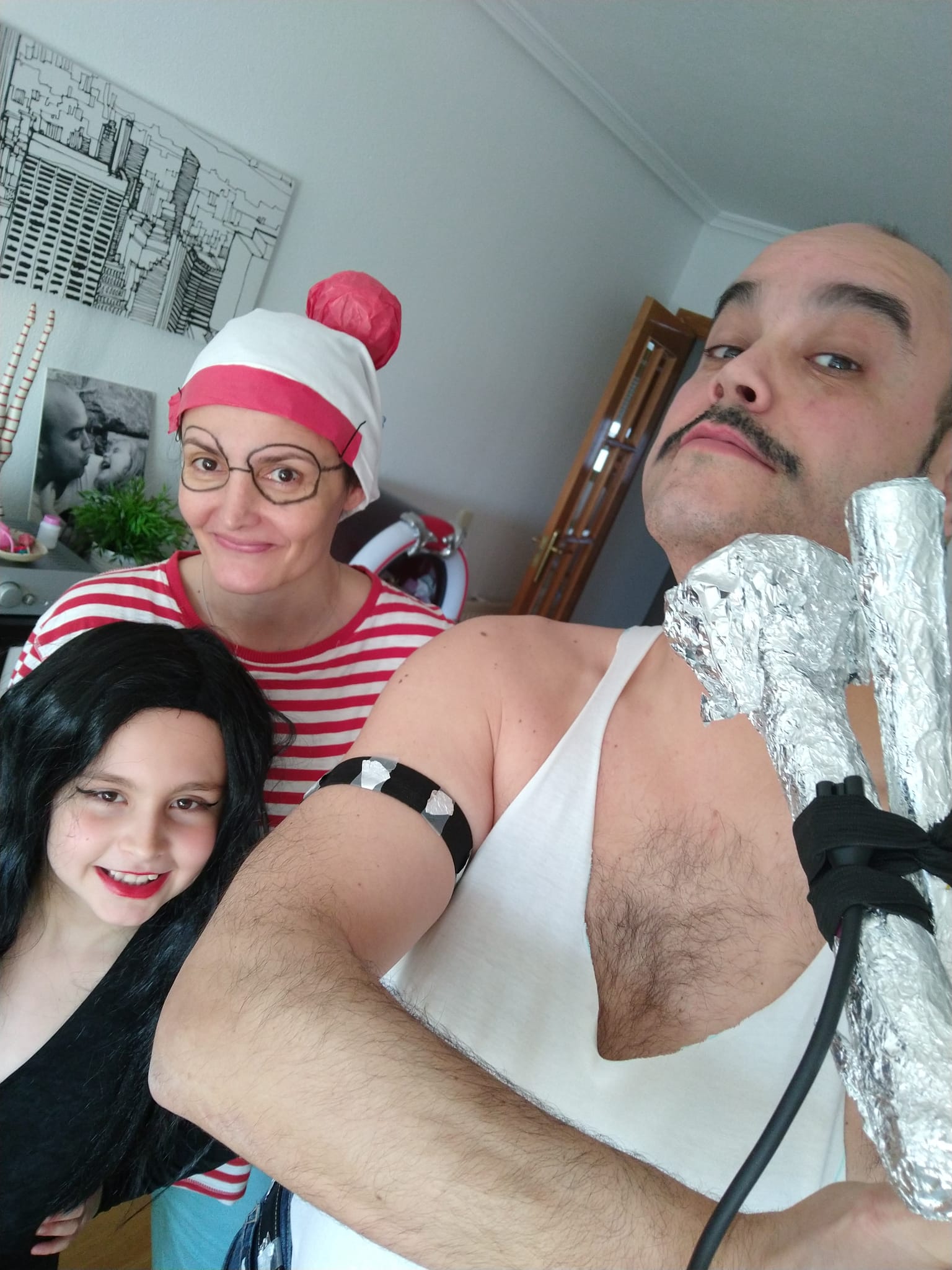 My aunt Yolanda, Daniel and Adriana dressed up with customes for a video call.

If there’s anything positive about this virus, it’s that people, confined at home, are trying things they never thought they would do. “My occupation now is playing the saxophone,” said my friend Eva, a dental hygienist.

“I’ve learned how to use a drill,” said my friend Mireya. “I’ve done gardening, I’ve learned to use a lathe, I’ve sewed, I’ve painted…”

Apparently everyone in Spain is exercising, even those who didn’t before.

“Guess how much distance I made walking in the backyard yesterday,” my mom said. “Seven kilometers!”
I was stunned—my mom just walked nearly four and a half miles in our backyard, in circles. I wished I was there to walk in circles with her.

My grandfather used to take a two-hour walk through downtown Granada every morning. Now, a hallway in the house is both his and my grandma’s trail. Back and forth they walk, hundreds of times a day.

“Your grandpa goes in the front, and I follow him. He goes straight down the hallway, gets to the end, and turns around the table of the living room while I am coming in through the door. We don’t want to pass each other in the hall since it’s too small.”

My grandparents, in other words, are like hamsters on a wheel. Or rats trapped in a cage.

In Maryland, the governor’s stay-at-home order is more relaxed, so we are allowed to leave the house. When I am not locked away doing school work and writing, I spend my days outdoors: walking, cycling, fishing. While my friends and relatives back home are getting creative to fight boredom, I am enjoying a life that keeps my mind alive. Yet I feel guilty, thinking of my family and friends in Spain.

My friend Víctor reminded me recently that sometimes we value life very little, that we are closer to death than we think. We are vulnerable.

I look out the window to see everything remains normal in the Annapolis suburbs: people walking their dogs, children playing, and neighbors socializing in their front yards. Everything in this neighborhood, The Courts at Belle Pointe, is where it’s supposed to be.

Meanwhile, the rest of the world breaks apart.

One thought on “Stranded in Annapolis, Thinking of Spain”