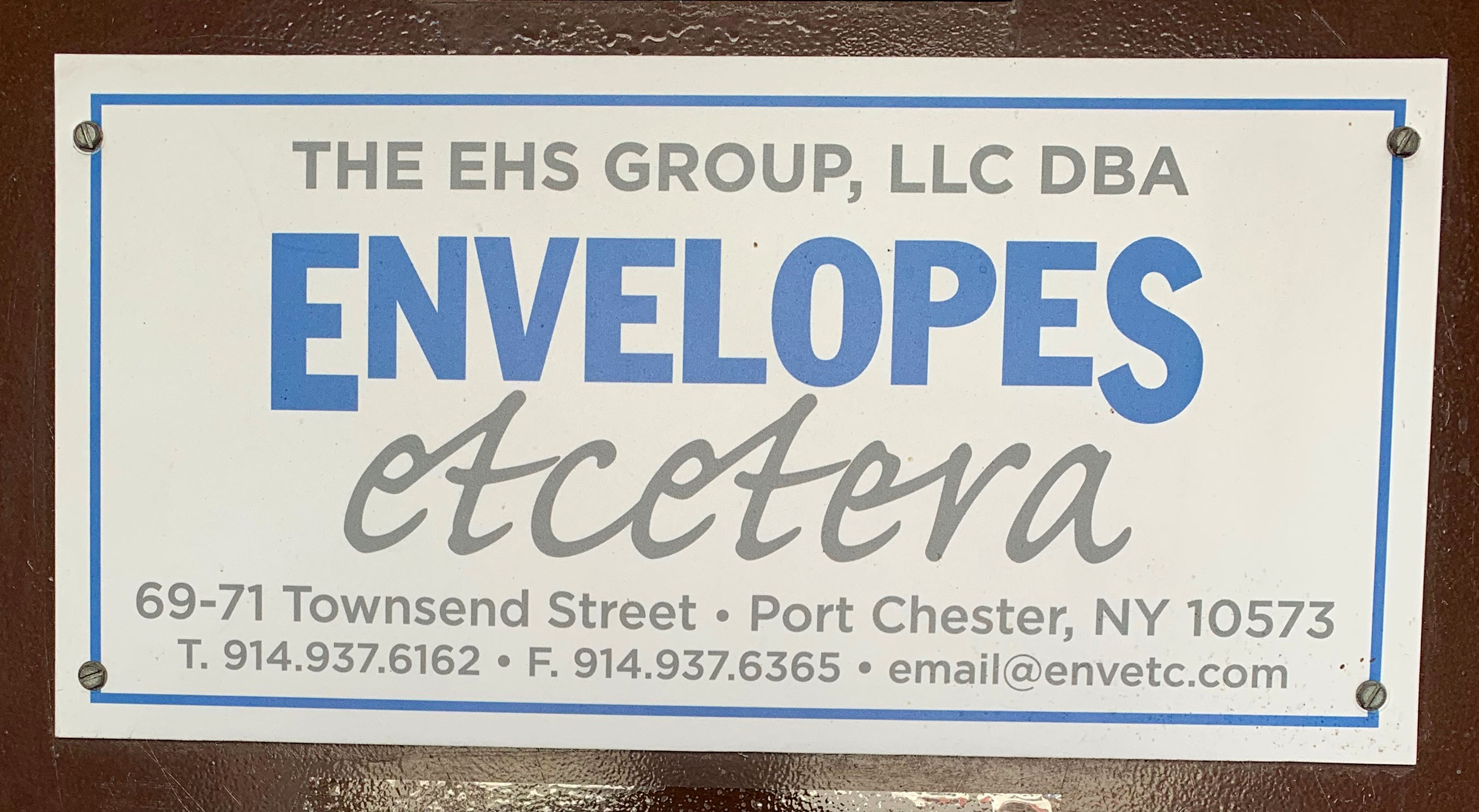 Since the outbreak of coronavirus, Envelopes Etcetera customers are not allowed inside the building without an appointment.

When envelopes, catalogs, brochures and advertisements show up in your mailbox, you might call it junk mail. But you may have noticed that you are getting less of it during the coronavirus outbreak. That’s certainly true for people living in Westchester County, one of the early hotspots for infection right outside of New York City.

“Normally on Saturdays, you don’t realize it, but that’s the day that you get a lot of catalogs,” Stephen Cartolano, founder for Envelopes Etcetera, said during a phone interview. “They mail them specifically out on Thursday or Friday, so they land in the mailbox on Saturday when you have time to open them up and look at them.”

At his own house, Cartolano only received one piece of mail on Saturday — a sure sign of the outbreak, he said. And since his own business involves printing and mailing flyers, he’s concerned.

Consumers probably didn’t know there was a company behind those flyers, Cartolano said. Still, he was surprised when Governor Andrew Cuomo announced that printers such as Envelopes Etcetera were deemed “essential businesses” that were to remain open during his stay-at-home order.

“We’re considered part of the U.S. mail chain,” Cartolano explained. “I think that’s one of the reasons why we’re allowed to stay open because somehow they have to find a way to get these things printed.”

“We’re actually what’s known as a trade printer, which means that we print for other printers,” Cartolano said. His company also prints letterheads and stores envelopes in their warehouse for clients.

In 1989, Cartolano started Envelopes Etcetera with his wife Lisa, after seeing a need for more print advertising while working for a company that made envelopes. As internet usage has increased, traditional print advertising has declined.

Five years ago, the Cartolanos sold the company to their plant manager, Steve Kennedy. Cartolano now works as a consultant, handling day-to-day duties.

As the virus has made its way through Westchester, the company has had less material to print for some of its clients. Normally, the spring would have brought business through events such as fundraisers, galas, and school functions.

“We lost that type of business because no one’s really having these spring galas—they can’t have the party,” Cartolano said. “You can’t have 500 people, or 50 people for that matter, meeting and celebrating one another.”

Even though business has waned, there are still orders that come in from bigger clients like hospitals in the tri-state area and companies that distribute forms. Some of their clients include Mt. Sinai Hospital in New York and RWJBarnabas, a network of independent healthcare providers in New Jersey. Cartolano said that one of their clients, TD Bank, requires specially ordered envelopes to be manufactured and can’t be bought off the shelf in a typical office supply store.

“We buy a year’s worth for them and we store them and they take them out as they need them,” Cartolano said. “If TD Bank can’t get to them because the warehouse is closed, then they can’t send out their monthly statements. Now again, a lot of this stuff can be done electronically but surprisingly, a lot of it is still done by mail.” 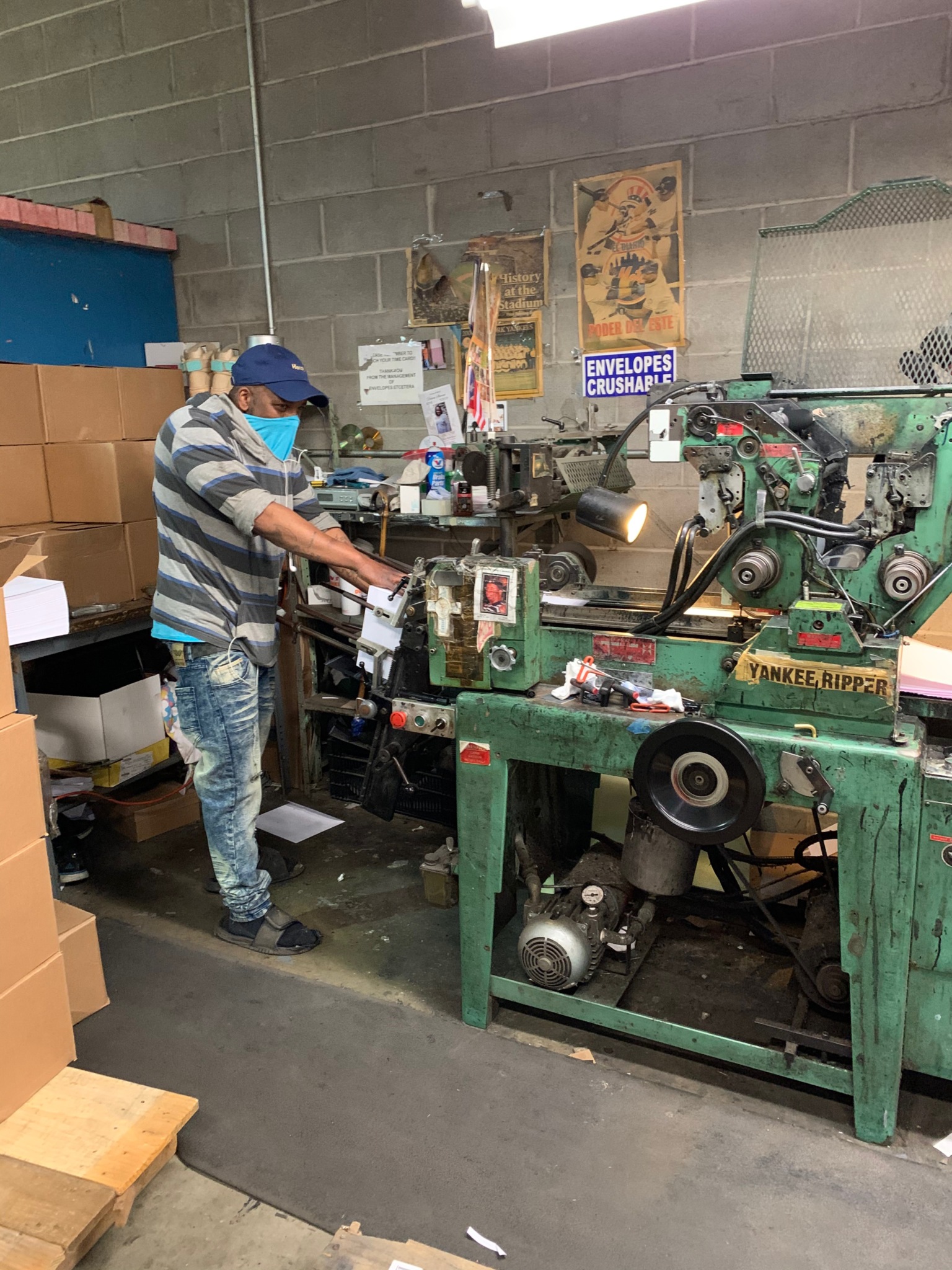 A pressman works on envelopes during the shortened week that comes with the coronavirus pandemic. The pressmen have been a part of the Envelopes Etcetera family for almost 16 years. Courtesy of Stephen Cartolano

The overall decline in the number of orders is also due to the fact that some of Envelopes Etcetera’s customers have had to close or are only working three days a week.

“Anybody that you talk to, any customers, the main topic of conversation is the virus: how it’s affecting them,” he said.

Like their customers, Envelopes Etcetera is also working a shorter week. Normally, the company operates five days a week with employees working 40 hours. Now, the week has been cut to four days, leaving workers with around 30 hours a week.

“It’s a very small office,” Cartolano said of the eight employees. The current owner, Steve Kennedy, started with the Cartolanos when the company first began, and all of the pressmen have been there since 2004.

For now, he and his colleagues at Envelopes Etcetera are still going to work, newly aware of the changes the pandemic has forces in their daily routines. Cartolano’s daily commute from Chappaqua to Port Chester is almost traffic-free, he said. No matter where you are, everyone is taking precautions.

“I’ve been in supermarkets in Port Chester and Chappaqua since it started and you see people with masks and people keeping social distance.”

Afraid of exposing their workers, Envelopes Etcetera has applied to the state of New York to be reclassified as non-essential, but has yet to hear back. Even some of their printer customers have been allowed to shut down, but bigger manufacturers of envelopes were also declared essential. Until they hear back, the company will continue to operate under this new normal.

What is the oddest thing about doing business in the time of COVID-19? I asked.

Cartolano thought for a moment, reflecting on what the business was like pre-pandemic. “When you’re in the office and the phone doesn’t ring for two hours.”