On a recent April night, the east bank of the James River was transformed from a quiet wooded clearing to something magical in the moonlight—a fairytale scene complete with music, lights strung from trees, and a crowd of youthful revelers, all presided over by a king and queen.

Welcome to River Dance, the brainchild of Brooke Willemstyn, a senior at the University of Richmond, who began organizing this event in early March in the midst of a university-wide conflict over access to social venues on campus.  Social spaces on campus are mostly limited to fraternity and sorority houses and a few university-sponsored events, which feel “like a parent trying to do something ‘cool’ for their kids,” according to Willemstyn.

Wishing to organize a more grassroots, student-led event, she turned to the James River and found her solution at Pony Pasture, which lies just a five-minute drive from campus.

The river, she says, is “an underutilized asset on our campus for it being so close. I hope the University will address the [on-campus social] issues, but I didn’t want to wait for that to happen, especially in my senior year.”

Her vision for River Dance was simple: “just a chance to dance in the moonlight with friends and strangers alike.” But why the James River? The river has meant a lot to me during my time here, and having River Dance there allowed attendees to interact with local people and remove themselves from the ‘social norms’ of campus and provide the ‘organic good time’ that the school has not been able to curate so far.”

She estimates that more than a hundred guests attended this first-ever River Dance. One of the highlights of the evening was the crowning of a River Queen and River King, titles that were created to amplify the mystical theme and recognize organizers of the event. Willemstyn was crowned Queen, alongside senior Paul Torre, who is this year’s King.

Next year’s title bearers, Reilly Geritz and Jake Lamar, both juniors, were announced at the end of the night and will be in charge of organizing the event next year.

“This year’s event was really successful because people had a good time, and it helped to diversify the social scene and spaces for students,” said Geritz. “I hope next year that we can have similar success.” 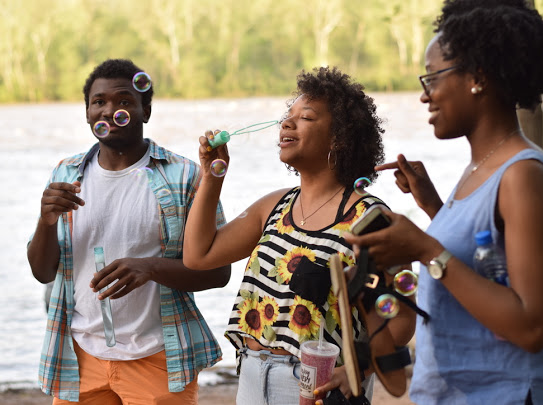 In its first year, River Dance has opened a new range of possibilities for student-led social events.

“I’ve seen a lot of the upperclassmen get more creative with social spaces, and River Dance kind of represents that,” said Eric Jedel, a senior who attended the event. “Campus has always felt so disconnected from the city, and I think these kinds of events—either informal like this one, or even school-sponsored—not only give students an alternative to Greek life events, but also connect students with the city.”