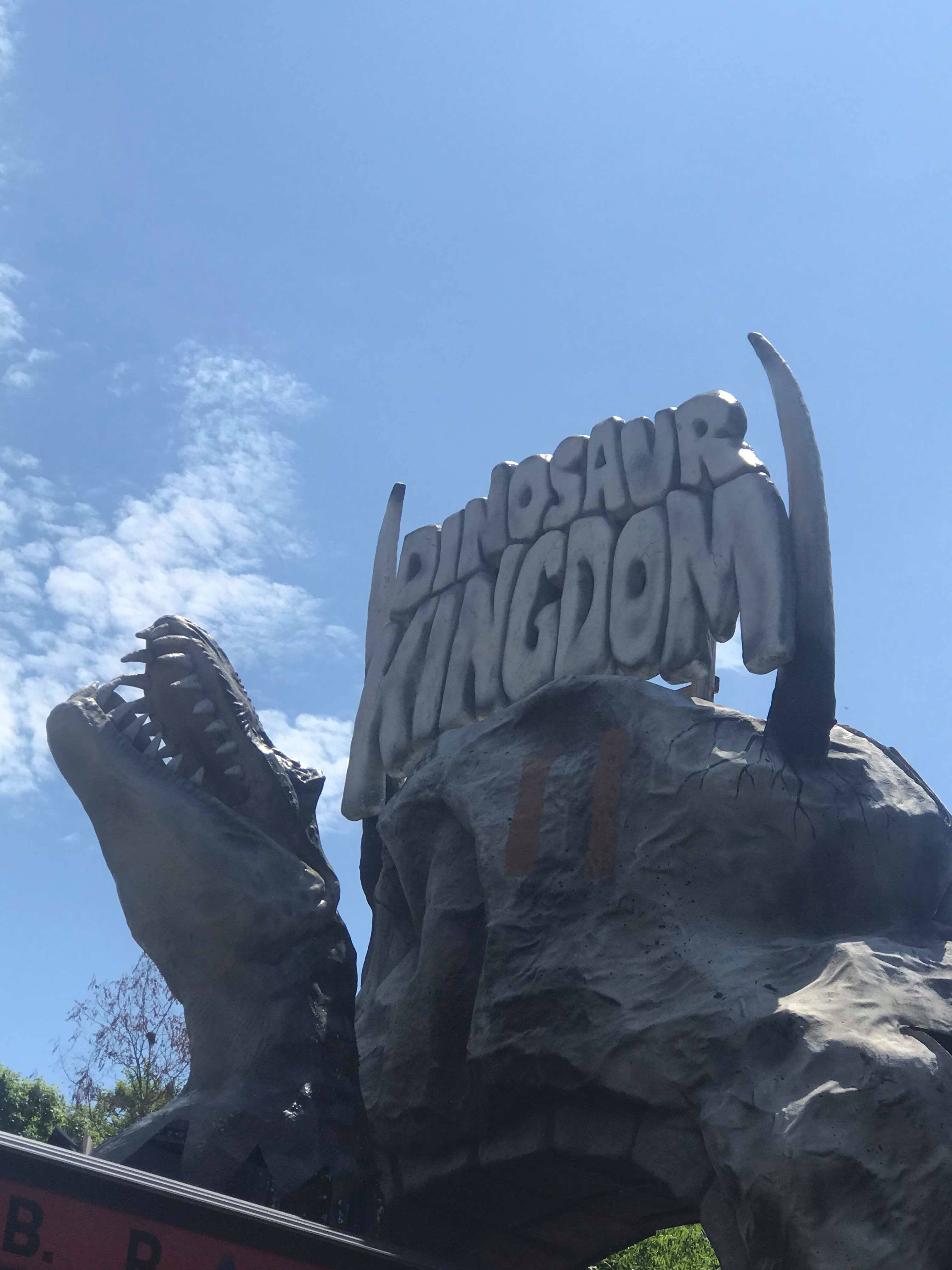 Dinosaur Kingdom was a site visit that took me by complete surprise. The initial shock came at the entrance of the park because it was located right off the side of the highway across the street from some type of zoo. Compared to the zoo, Dinosaur Kingdom had far less visitors and was surrounded by a large wooden fence that made it seem like a fortress of some kind. This fence obstructs everyone’s view to the inside and really leaves you wondering what could be behind such an interesting entrance. The park, in general, seemed rather empty and run-down right from the start, which allowed me to form an initial judgement about the site. Prior to visiting, all that I knew about the site was that it was related to the confederacy and somehow, dinosaurs were involved.

As you are walking toward the site, a life-size figure of a Union soldier fighting a dinosaur greets you from the top of an old cable car, which also acts as the entrance to the park. Passing through this strange entrance, you come across another bizarre walkway that has a spinning wall surrounding it. 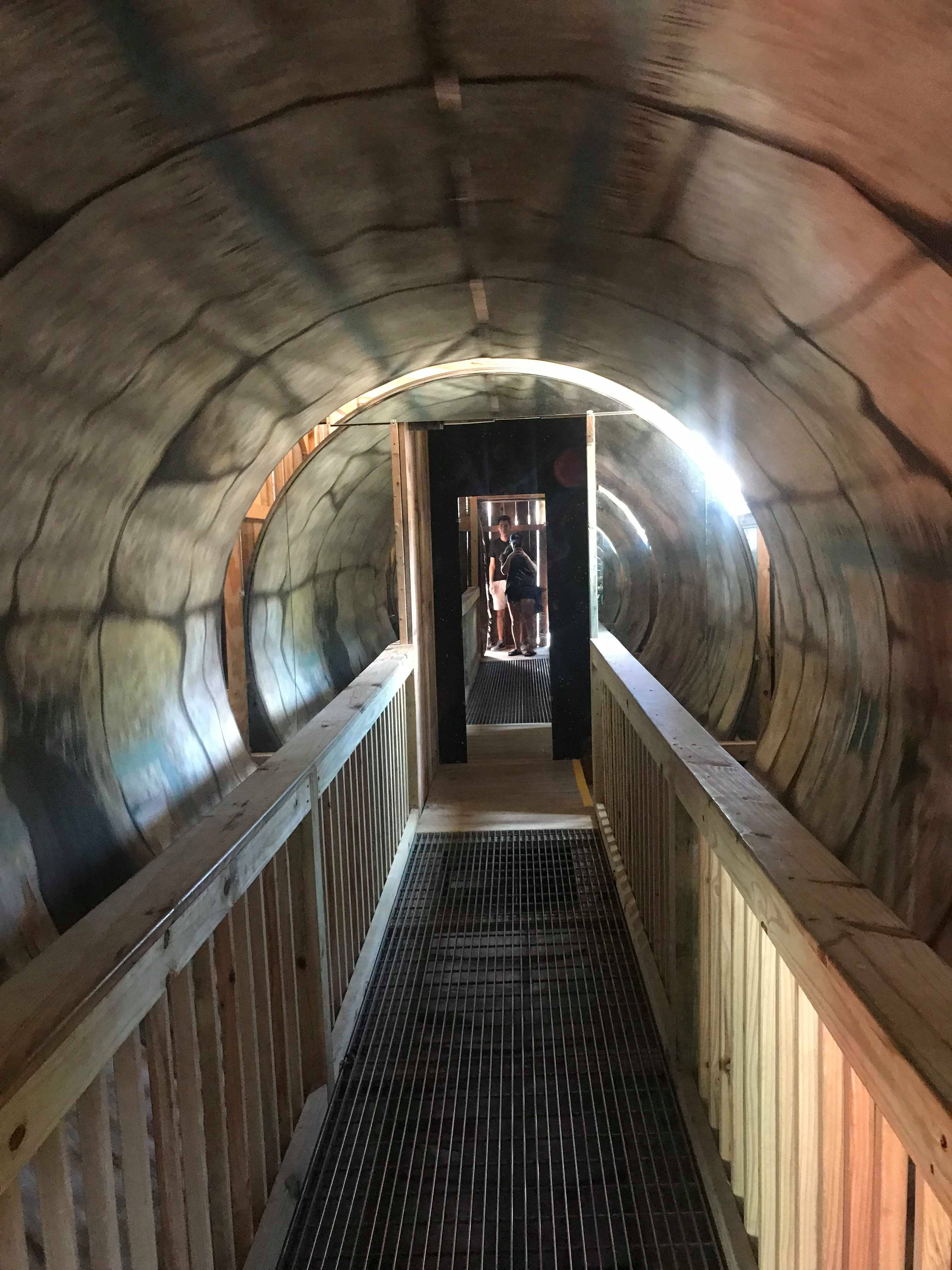 Once you pass through both entryways, a small make-shift town center appears. There are buildings lined up on either side that the visitor can walk into, each showcasing different parts of the park’s narrative. 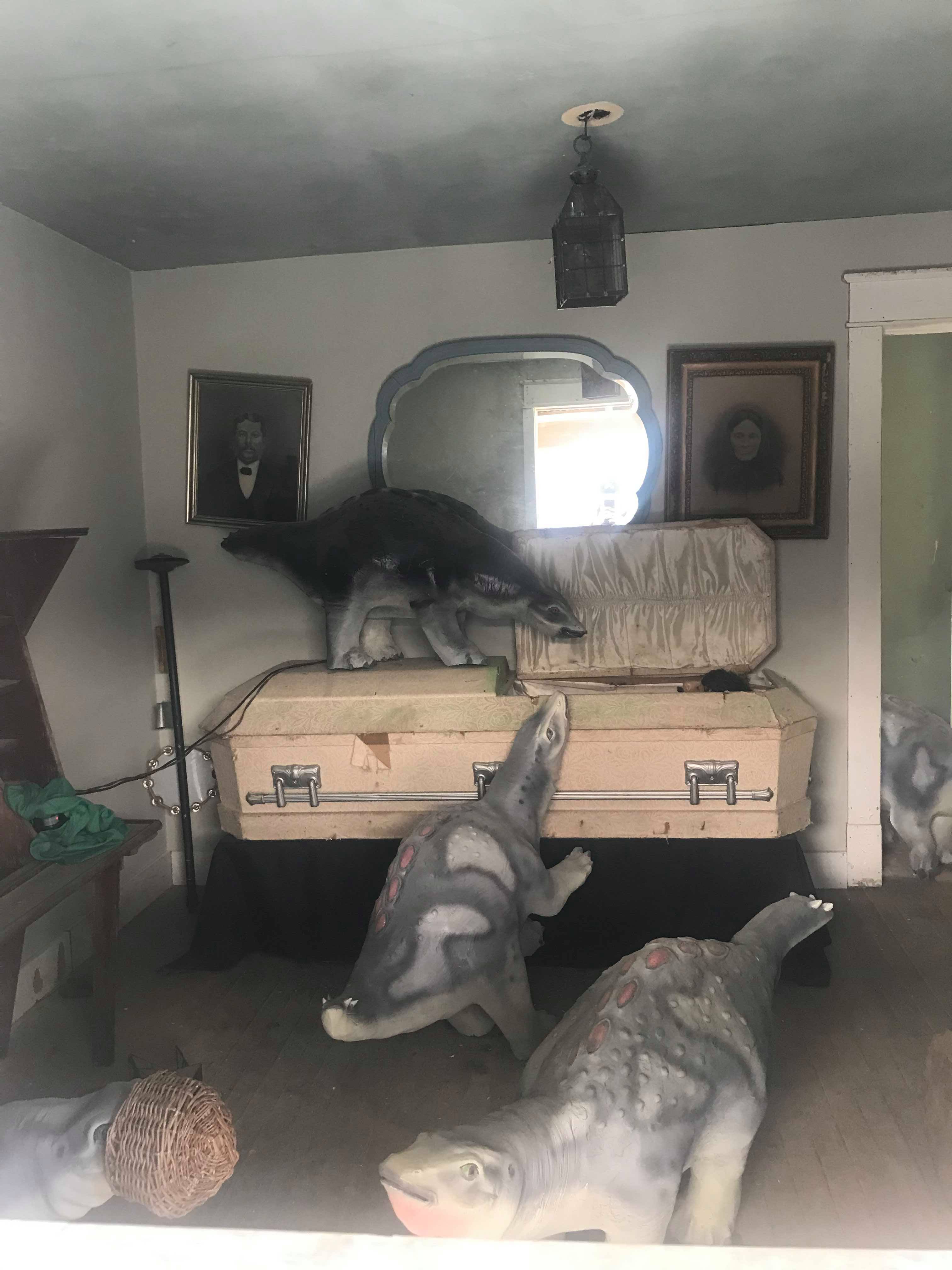 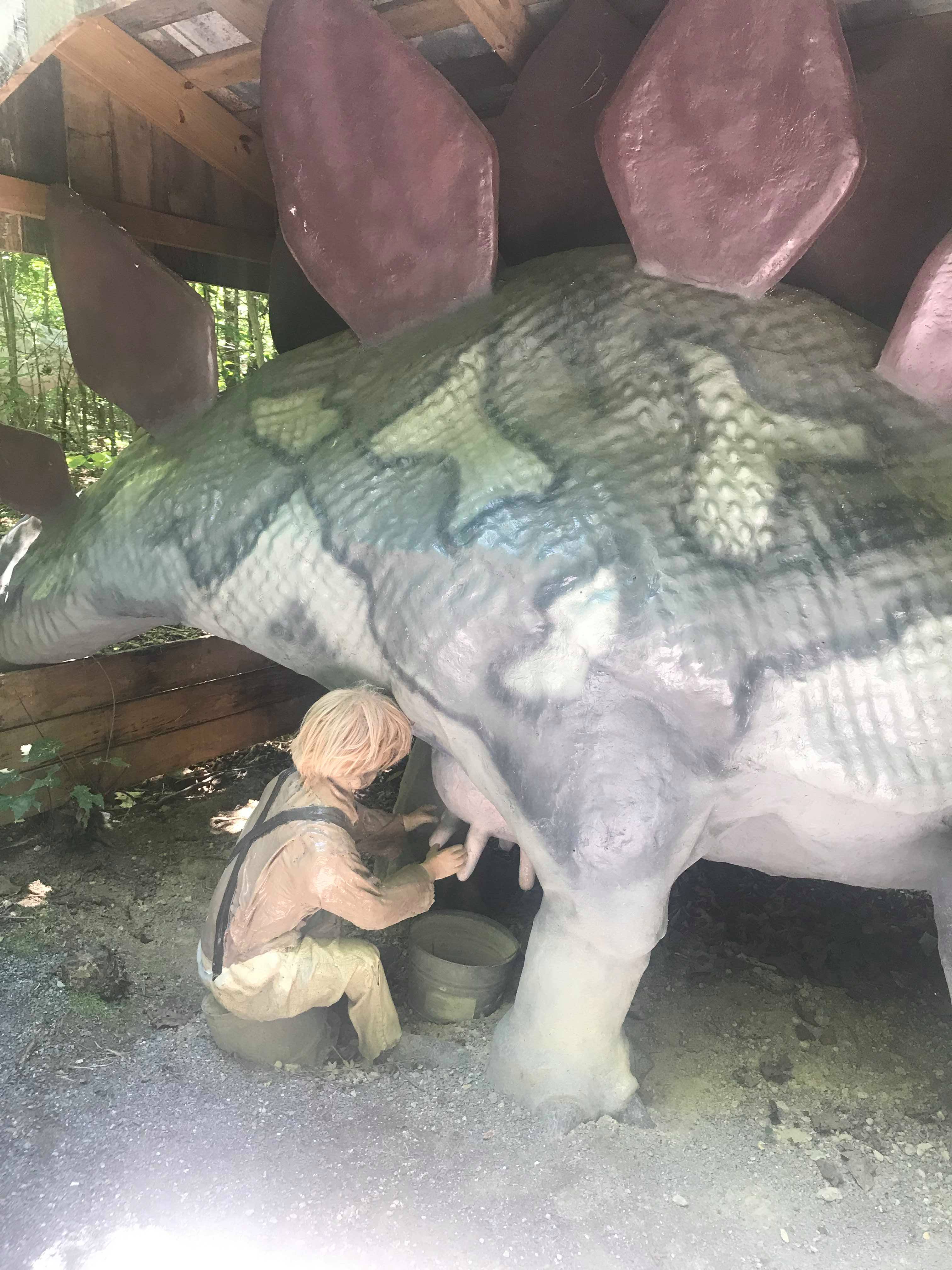 Some of the buildings were interactive and allowed visitors to engage with the story behind the dinosaurs and slime monsters. Past the town, there’s a trail through a wooded area that continues the story of the park. There are plastic replicas of dinosaurs, confederate soldiers, and slime creatures that form an interesting narrative of the Civil War. At each significant stopping point, there are stakes with pictures from the pages of a cartoon depicting what is happening in the scene. Since each replicated scene is from a comic book, I believe that the ultimate goal of the site is to entertain rather than inform. 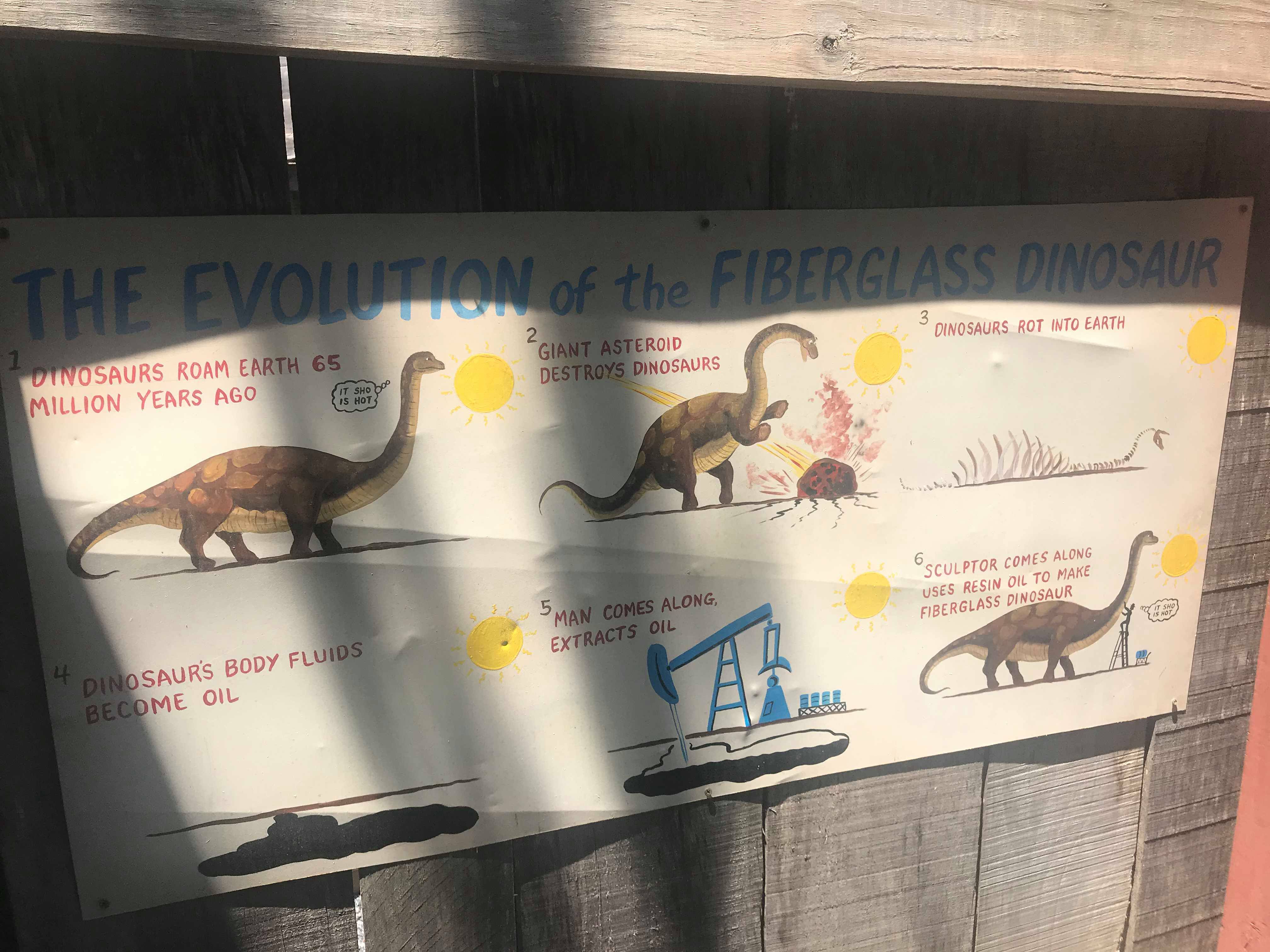 After walking through the park, I did some research on Mark Cline, the creator of Dinosaur Kingdom. I believe that the purpose of the site is solely to entertain visitors by creating a physical accompaniment to the comic books that Cline wrote. The narrative of the park is strange in that dinosaurs supposedly play a role in the Civil War along with slime monsters that help transport individuals back to that era. The park is organized by a chronological story that follows the comic books written by Cline. Historically, the context behind the park is based around the Civil War and the dinosaurs that the Union Army used to defeat the confederate soldiers. The park tells the story from the confederate army’s point of view by explaining how the dinosaurs were discovered by the confederacy and used against the Union Army, the army that previously had used them as their main weapon. This whole exhibit puts the Lost Cause Ideology into a new perspective and, if anything, highlights the many different ways in which the truth about the confederacy gets twisted. At the same time, however, the biggest weakness of the exhibit is this ludicrous tale that is told throughout the park. It is so obvious that the park is a one-man creation, and I am still quite unsure of what the park is supposed to do other than meaninglessly attempt to entertain visitors.