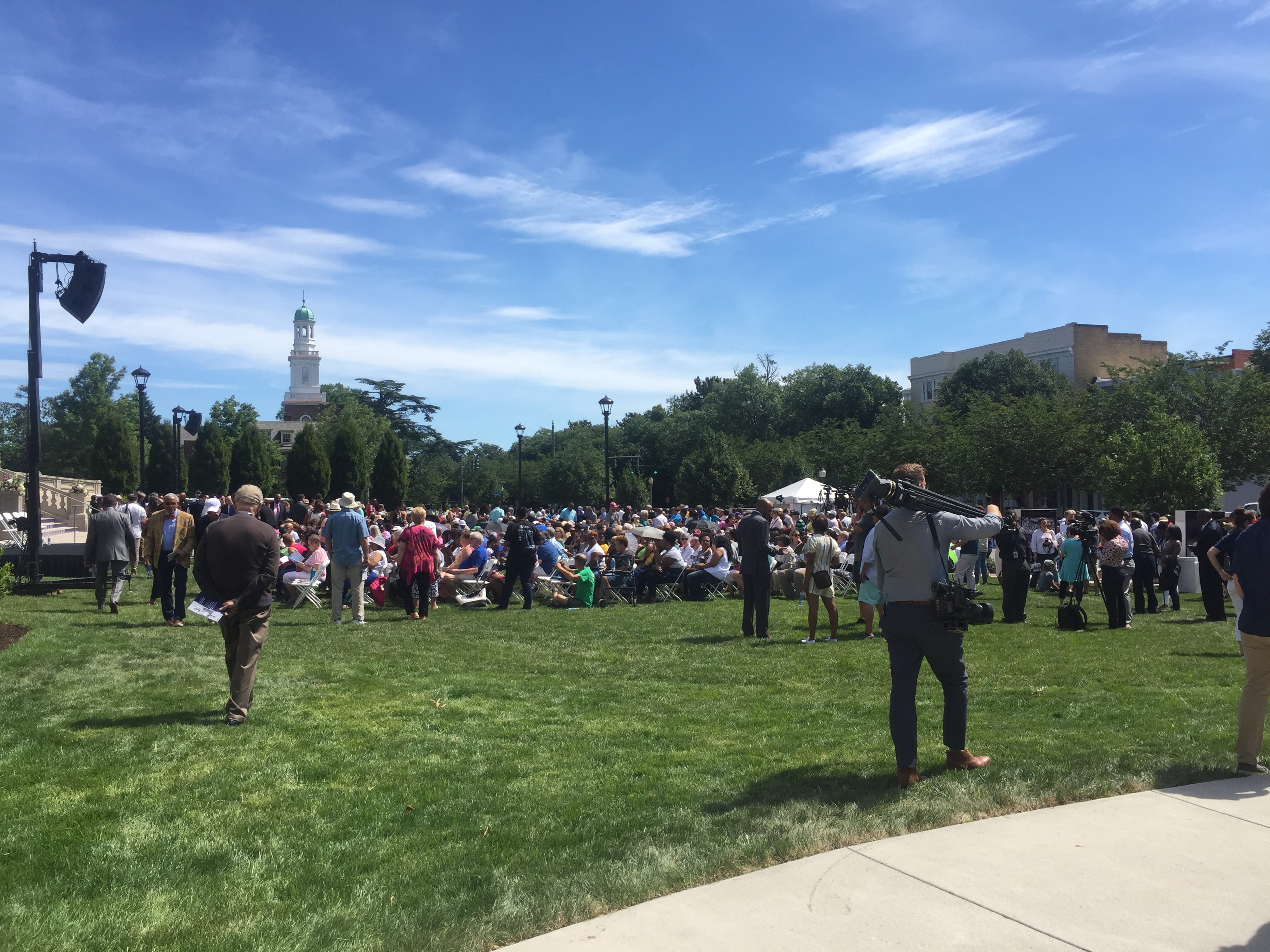 These words, rising proudly above exuberant applause, belong to Congressman John Lewis of Georgia. The acclaimed civil rights activist delivered this statement to hundreds of people on June 22, 2019 at the Arthur Ashe Boulevard Dedication Ceremony, which took place on the front steps of the Virginia Museum of History and Culture. I had the privilege of witnessing this remarkable moment in the city of Richmond’s history, a moment that coincided with the unveiling of the museum’s new commemorative exhibition called “Determined: The 400-year Struggle for Black Equality.” This ceremony on a sunny Saturday morning was my first introduction to the life and work of Arthur Ashe, as well as my first time seeing and hearing many of Virginia’s key politicians in person. Along with keynote speaker John Lewis, I heard speeches from Virginia Governor Ralph Northam, Virginia Senator Tim Kaine and Richmond Mayor Levar Stoney.

However, one of the most pertinent and memorable speeches of the day was that of David Harris Jr., Arthur Ashe’s nephew. His speech, inspired by the importance of the dedication ceremony, called for a continuation of Ashe’s anti-racist ideals and the furthering of his legacy as a civil rights activist. Born in 1943, Arthur Ashe was the first Black man to be ranked number one in the world for tennis, and the first to win the men’s singles at Wimbledon, the U.S. Open and the Australian Open. Ashe’s success broke barriers; due to growing up in segregated Richmond, he was denied access to Byrd Park, an all-white recreational facility. Learning about Ashe’s legacy as a renowned athlete and humanitarian from Ashe’s relative, along with seeing members of Ashe’s extended family seated in the middle of the audience, reminded me of how immediately urgent the struggle for equality actually is. The hardships and obstacles that Arthur Ashe faced in his journey toward athletic excellence were retold by a man only a generation apart from him. Returning to the aforementioned quote by John Lewis and the topic of the newly unveiled exhibition, the fight for equality did not happen sometime 400 years in the past; in various forms, it still wages on now. 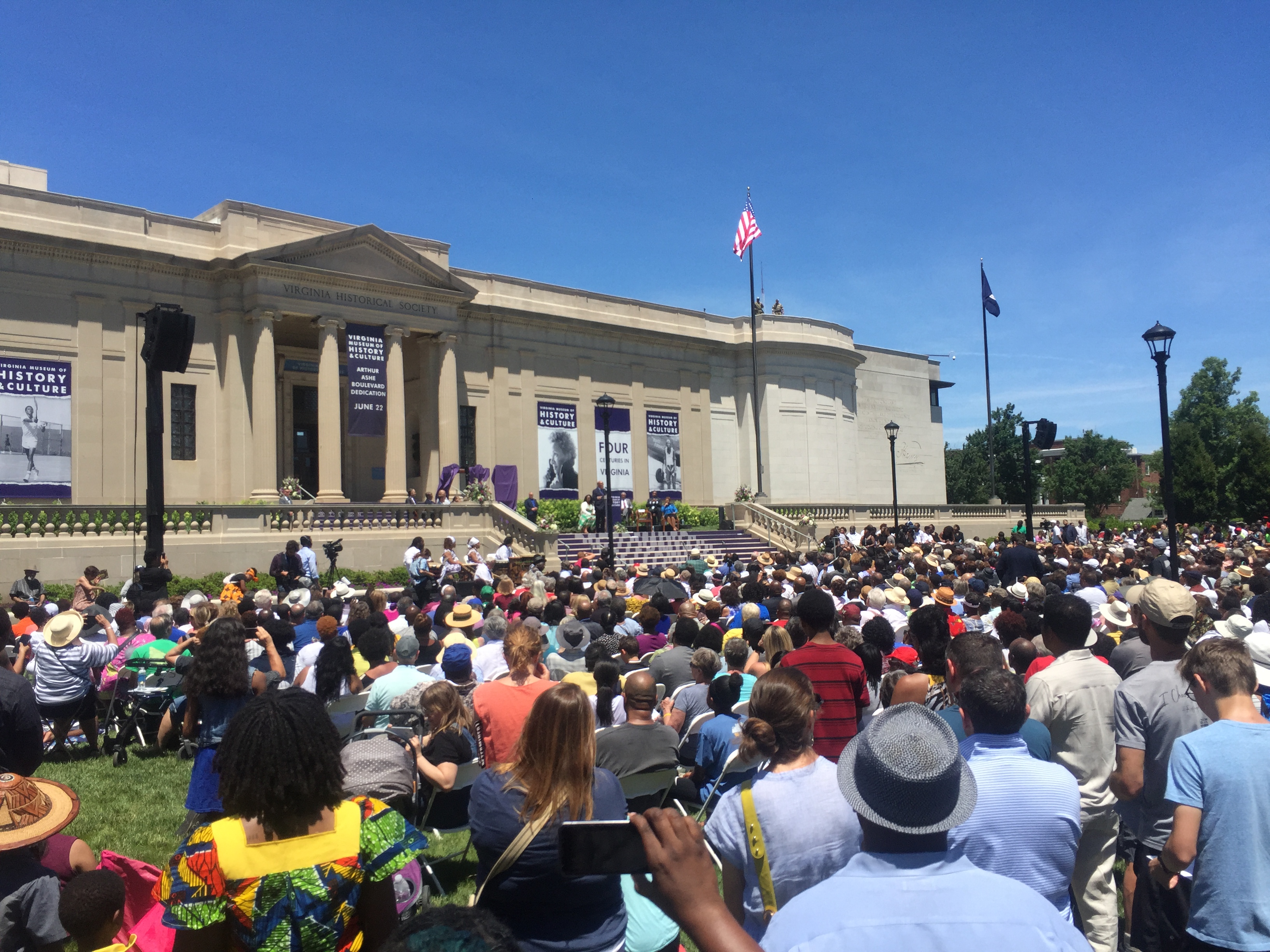 The only speech that I received with mixed emotions was Ralph Northam’s, who remains in office despite calls for his resignation after a blackface scandal  in February 2019. In his brief speech, Northam advocated for the improved teaching of African-American history in schools. Since I respect his influential position as Governor, I was relieved that his speech was succinct, since his good-intentioned words felt clouded by his recent scandal.

In conclusion, I would like to return once more to the speech given by John Lewis, which was the most impactful to me by far. At multiple points throughout his speech, Lewis urged the audience to remember that “It’s time for us to get into trouble again—good trouble, necessary trouble.” The phrase “good trouble” instantly stuck with me because I believe it relates in some ways to the work of the Race & Racism Project. Although not at a scale comparable to John Lewis’ work during the Civil Rights Movement of the 1960s, I believe that all activism can qualify as “good trouble,” no matter how big the trouble. Archival activism is no different; I have begun to understand that actively critiquing the University of Richmond does not come without risk. For example, if a researcher on our project critiques the past racist actions of Greek life on our campus, that researcher faces potential social isolation. Even knowing this risk, as John Lewis affirms and Arthur Ashe would agree, the most important work is often that which challenges racial injustice.