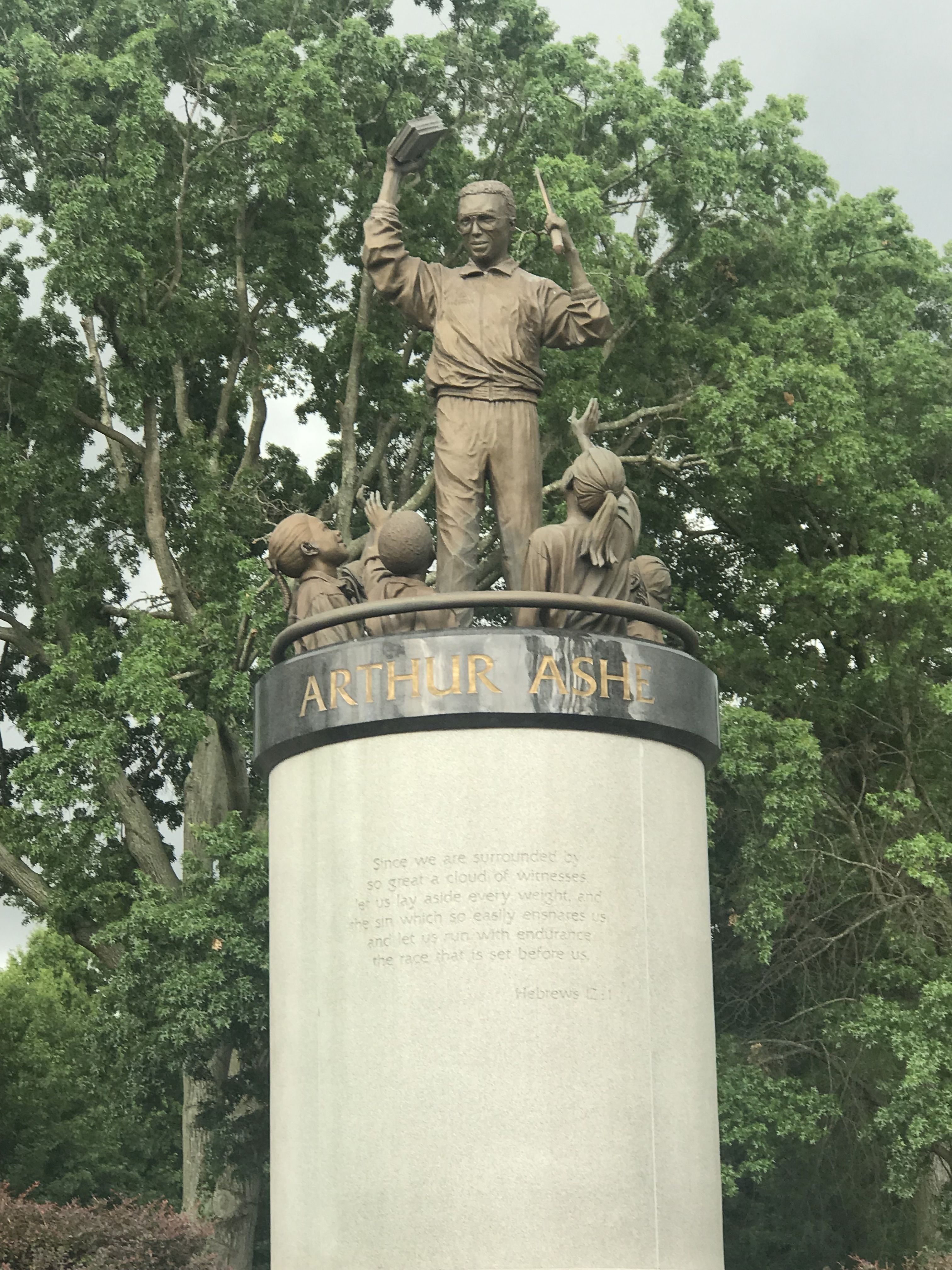 The most memorable monument that I visited was the Arthur Ashe monument located on Monument Avenue. Arthur Ashe was born in Richmond, Virginia and was the first African American man to be ranked as the number one tennis player in the world. As the monument resides in the middle of two streets, my friend and I parked further down the street, walked all the way to the left side of the monument, crossed the street, and approached the monument from the back. While walking down the street, we came across another statue just before the Arthur Ashe monument, which was quite disturbing. I had never seen the statue before and was alarmed at what I interpreted the statue to mean. Once I got home, I looked up the statue that we had seen and learned that it was a monument to Matthew Fontaine Maury, a Confederate naval officer. I was shocked at the statue’s imagery of tens of people struggling to lift up the world as a statue of Maury sits on a throne – of sorts – in front of them. After encountering this statue that glorified white privilege and entitlement, we came across the unpretentious monument of Arthur Ashe. 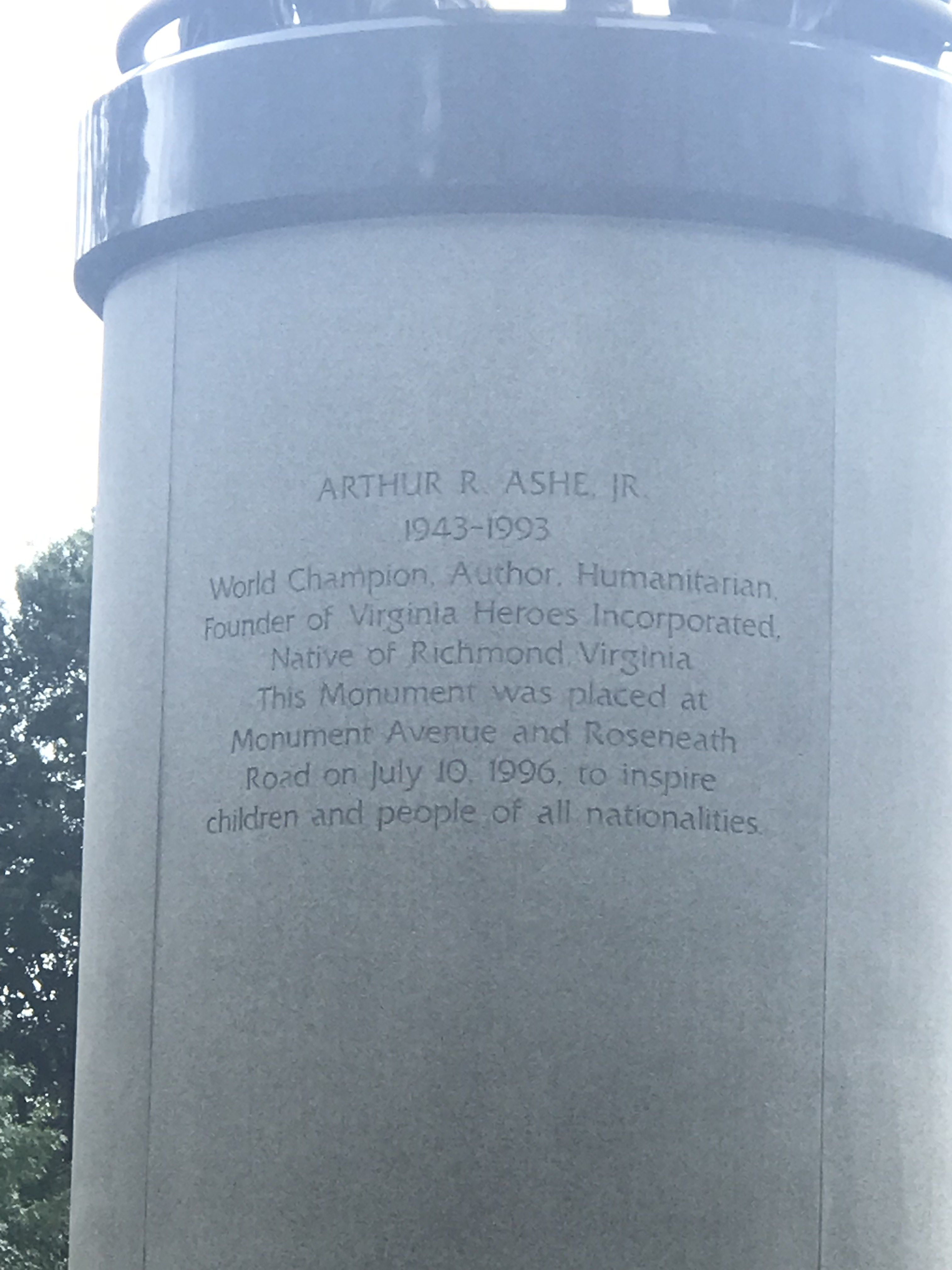 Driving down the street, you almost miss the statue of Arthur Ashe because of the tall trees. There is a convenient break in the concrete right in front of the monument for cars to make turns. We walked up behind the statue and had the chance to read the inscription engraved into the stone. The powerful words give meaning to the statue of Ashe as a symbol to “inspire children and people of all nationalities.” The inscription portrays the pride of the city as he is remembered for being a native of Richmond and a role model to those fighting against racial injustices and boundaries laid before them. The statue itself is a beautiful rendering of his athleticism joined with his humanitarian work as Ashe holds a tennis racket in one hand and books in another. He is also surrounded by children who are reaching out their hands to him while also admiring him by facing upwards. 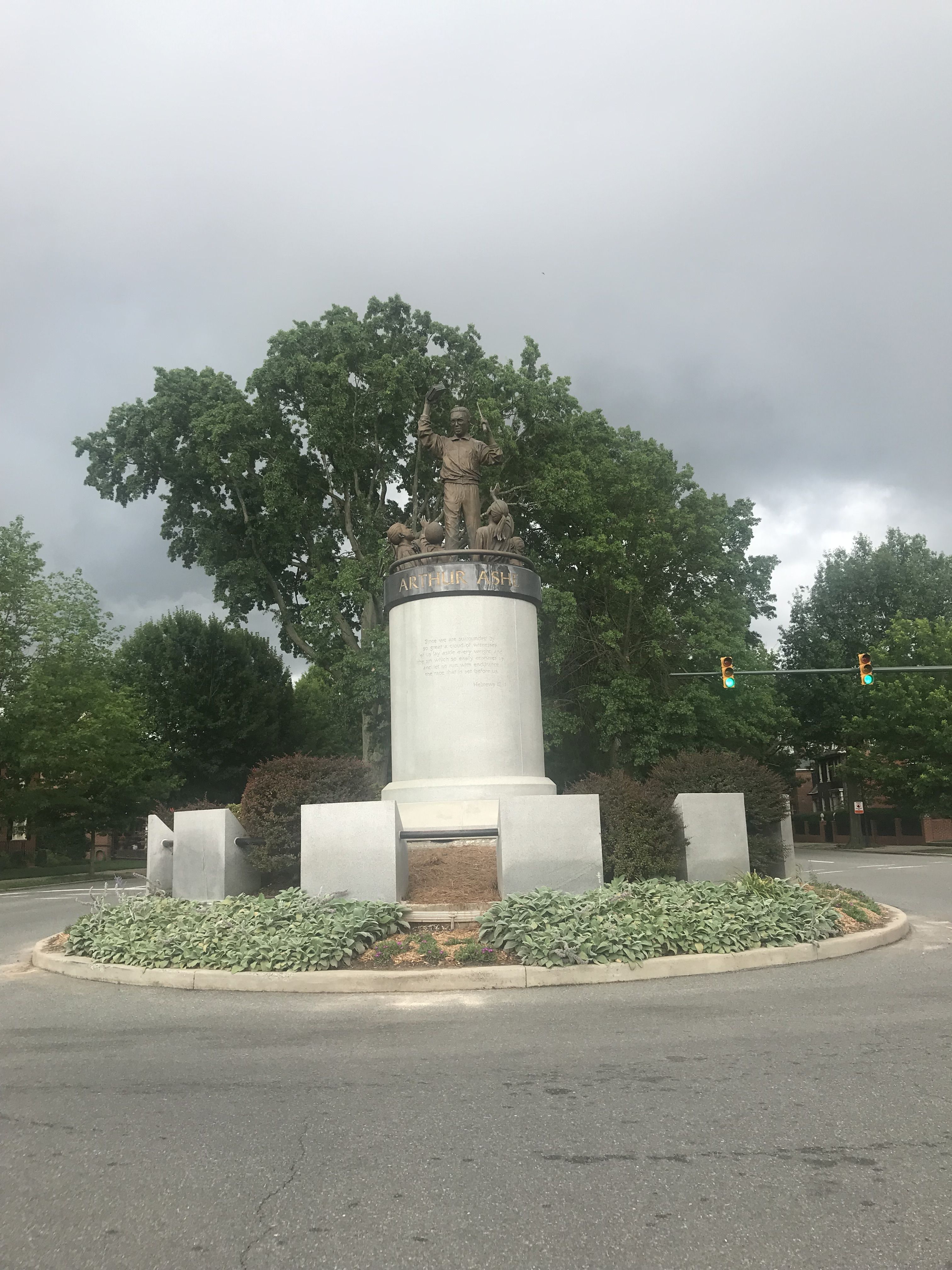 The most prominent part of the Arthur Ashe monument, for me personally, lay in its comparison with the Matthew Fontaine Maury monument. An iron gate surrounded the Maury monument, which relayed an extremely clear message of hostility toward visitors and protection for the statue. In contrast, when approaching the Arthur Ashe monument, there was a stone “gate” that didn’t seem to function except as an addition to the statue’s architecture. The different styles of gates, for example, made me think about issues of vandalism, historical conflict, and the public purpose of the monuments. The difference in imagery and atmosphere surrounding the two monuments was astounding and the most distinctive feature.

I believe the most powerful thing about the monument is the conflict and resistance that the statue faced in terms of its placement. Even though many white people believed that the monument was infringing upon the confederate history of Monument Avenue, Arthur Ashe is still commemorated alongside Confederate statues. While the monument’s placement is complex, it can be read in part as an act of defiance against confederate ideology in the city of Richmond.