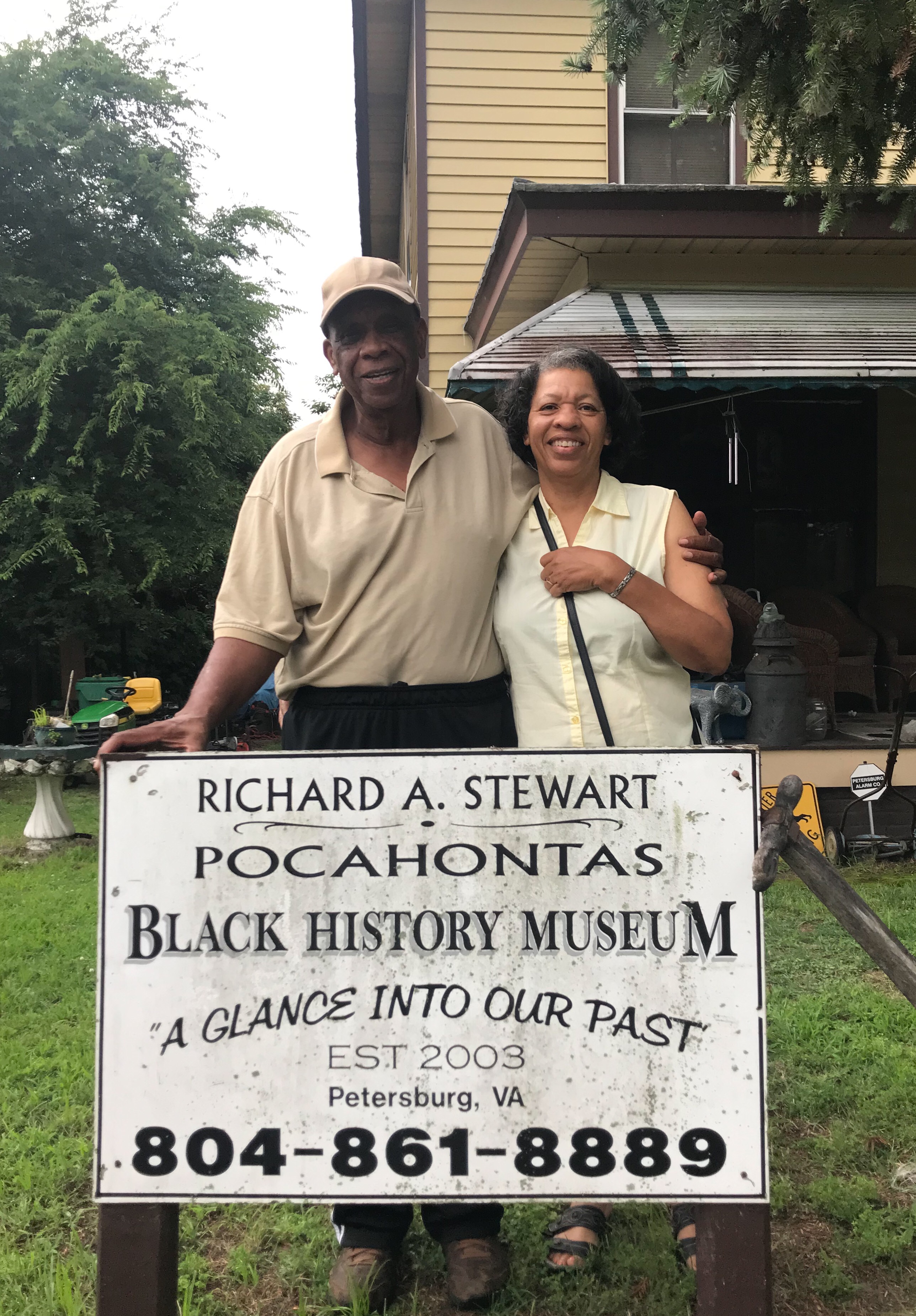 For my first site visit, I chose to go to the Pocahontas Island Black History Museum in Petersburg, Virginia. Like much of Virginia, Petersburg is full of rich history, and Pocahontas Island is no exception: it was home to at least two stops on the Underground Railroad as well as one of the first free black communities in United States, though enslaved Africans and white people lived on the land as well. As such, the area’s history spans from before the Revolutionary War to today, and the area is listed on both the Virginia Landmarks Register and the National Register of Historic Places. Although Pocahontas Island has government recognition, Preservation Virginia listed it as one of the most endangered historic sites in Virginia due to a lack of funding to adequately restore the important properties on the island in order to communicate the area’s historical significance. Accordingly, the Black History Museum is privately owned and operated by Richard Stewart, a 76 year old Pocahontas Island native. He began the museum in 2003 out of a desire to share his love for the area’s history with visitors to the museum.

The museum itself is housed in a modest house on Witten Street, but inside the museum is brimming with hundreds of photographs, relics, and historical documents Stewart uses to tell the story of black history on Pocahontas Island, in Virginia, and in the nation as a whole. The stories told ranged from the first enslaved Africans brought to Virginia in 1619 to the lynchings of the 19th and 20th centuries, stories brought to life by the slave shackles and Ku Klux Klan robes on display in the museum.

However, the most salient aspects of my visit to the museum did not have to do with the historical facts shared, but rather how unusual the museum itself is. How often do we see history presented to us not by institutions, but by individual community members? After reflecting upon my visit to the museum, I realized this was the first museum I had visited not created by the Smithsonian Institution or a similar organization. And while I love the Smithsonian and the many excellent museums they have created, I am aware that the history presented in its museums is influenced by the dominant white culture of American society. There is something uniquely remarkable in seeing marginalized individuals present their own history. As archivist Dominique Luster notes, history has the profound power to either uplift or erase. So, when individuals from marginalized backgrounds are able to take control of telling their own stories, they have the ability to uplift their community by informing the greater public of the significance of their history on their own terms. For my visit to Pocahontas Island, knowing that Stewart’s ancestors were enslaved in Virginia made me pay special attention to his stories, and when he called the land “sacred” I was inclined to believe him, as I knew the real, personal connection he had to the stories he told. And when he spoke of the post-traumatic stress of slavery, I considered the phenomenon I had heard of before in a new light. During our visit, Johnnette Johnson, also on Team Oral History, and I were not the only visitors to the museum; there was a white, Mormon family from Wyoming there as well. Hearing Stewart talk to all of us about the post-traumatic stress of slavery made me realize that it is not solely an issue for black people to grapple with, but everyone in American society, white people included.

Having taken the time to reflect on my visit to Pocahontas island, two major themes emerge: the significance of members of marginalized groups telling their own stories and the importance of all Americans grappling with our sordid racial history. These also happen to be the same two themes that have been guiding my work with the Race & Racism Project this summer. The oral histories I am conducting matter because they amplify the voices of students whose needs and experiences were often overlooked during their time at UR, allowing them to uplift themselves by telling their own stories on their own terms in hopes that we may begin to move forward as a university community.