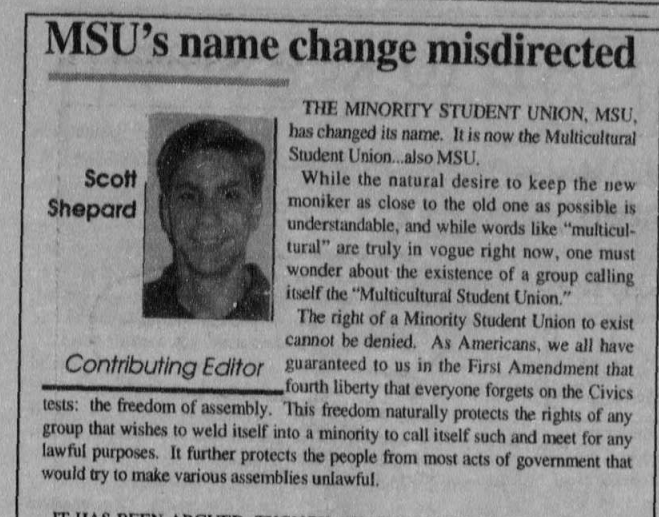 Throughout my journey through old Collegian articles, I’ve seen all kinds of articles. Some leave me scratching my head, while others just get my blood boiling. The article I am expressing my opinion on falls under the latter group. The article in question is titled “MSU’s name change misdirected.” It was written by a white Richmond college student and Collegian contributing editor by the name of Scott Shepard in the year 1993.

In the wake of the Minority Student Union (MSU) changing their name to the Multicultural Student Union, Shepard took to the Collegian to express his dissatisfaction with the change. Without presenting any feasible alternatives, Shepard bashes the MSU with his own racist thoughts.

The MSU is a student union that wished to give a social home to those who felt like they did not fit into the traditional fabrics of UR campus life. The University of Richmond had been and still is a hostile environment for those in the minority, and the MSU desired to give those students a voice.

Shepard begins his criticism by stating that although these groups are legally allowed to assemble, that does not mean they should. His main argument against the MSU is that they aren’t truly “multicultural” as they only represent black students on campus and not every culture. Shepard believes that if black students can congregate and advocate for their best interests, white students can do the same. Well, Scott, white people did and do have a space on campus to do just that. Social fraternities and sororities, business fraternities, and even the student governments are all typically majority white institutions. Black students’ voices were previously unheard, and Shepard came across as wanting to keep it that way.

So far, this is pretty run of the mill racism. I had been seeing articles like this all over the Collegian. However, Shepard had the audacity to double down and use the words of the great civil rights leader, Dr. Martin Luther King Jr., to further his racist agenda. He invokes the words from his famous “I Have a Dream” speech to say that people should be judged by their character and not their pigmentation, thus a student union representing only black students was “antithetical” to King’s dream.

Shepard spent most of the article attacking the “multicultural” name change for the MSU, but proved that this wasn’t really about the language used, as he also stated his discomfort with the old Minority Student Union name. Shepard claimed that “minority” is also incorrect because according to the numbers, every demographic, including Anglo-Saxon males like Shepard, was a numeric minority on campus. Regardless of the numbers that Shepard relied on, it would take less than a month of living on campus to realize that influence and social capital lies within white social groups.

Even before the MSU article, a student by the name of Dennis Callahan wrote an article condemning Shepard for his severe lack of knowledge on topics of which he writes. Callahan asked the reader if Scott Shepard’s words were even worth the paper they were printed on. A black law student by the name of Victor Mba-Jonas wrote a response article to Shepard’s that uses his personal experience of being marginalized by police to prove that the MSU is necessary. Without explicitly saying it, Mba-Jones is exposing the white fragility displayed by Shepard. The Oxford Dictionary recently defined white fragility as “discomfort and defensiveness on the part of a white person when confronted by information about racial injustice and inequality.” Essentially, white fragility elicits a strong response from a white person when something as simple as a name change of a racial group. A great example of this is the “All Lives Matter” response used to combat the racial injustices exposed by the Black Lives Matter movement. In 1993, it appears as though Shepard felt that his whiteness and status on campus might have been impacted by a socially oppressed minority group even existing. It is men like Scott Shepard who perpetuated our national system of racial inequality, weakening others’ efforts to address the problem of race in America.