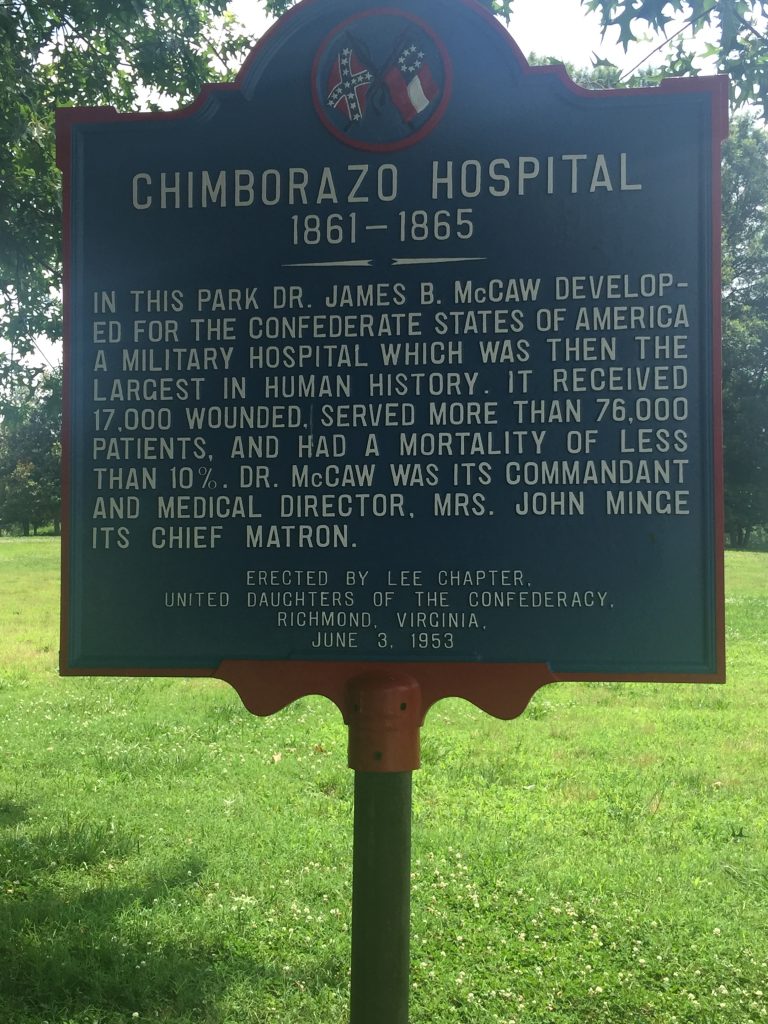 I had never been to Church Hill until going for this site visit–exploring the city is hard when relying entirely on University of Richmond for transportation. So I asked my friend, a history major with just enough interest in the Civil War, to make a museum trip on a hot afternoon (a better plan than laying in bed), to come with me to the Chimborazo Medical Museum. We got lunch and walked the five blocks to the museum.

We got to the park and saw on the top of the hill a building labeled Richmond National Battlefield Park Visitors Center. I was greeted by an older man, “Welcome to Chimborazo! If you’re looking for a battlefield, I’m sorry but this is it.” I asked what he meant and he explained that most of the historical tourists that came to visit were looking for a battlefield, the name of the building being a misnomer. He explained that the first floor of the building was the museum, “we’ve got some pretty gory stuff in that room there, a fifteen minute video, and a model of what the hospital would have looked like back in the day. This building wasn’t the hospital you see it was actually a weather station, used to launch weather balloons off the roof.” 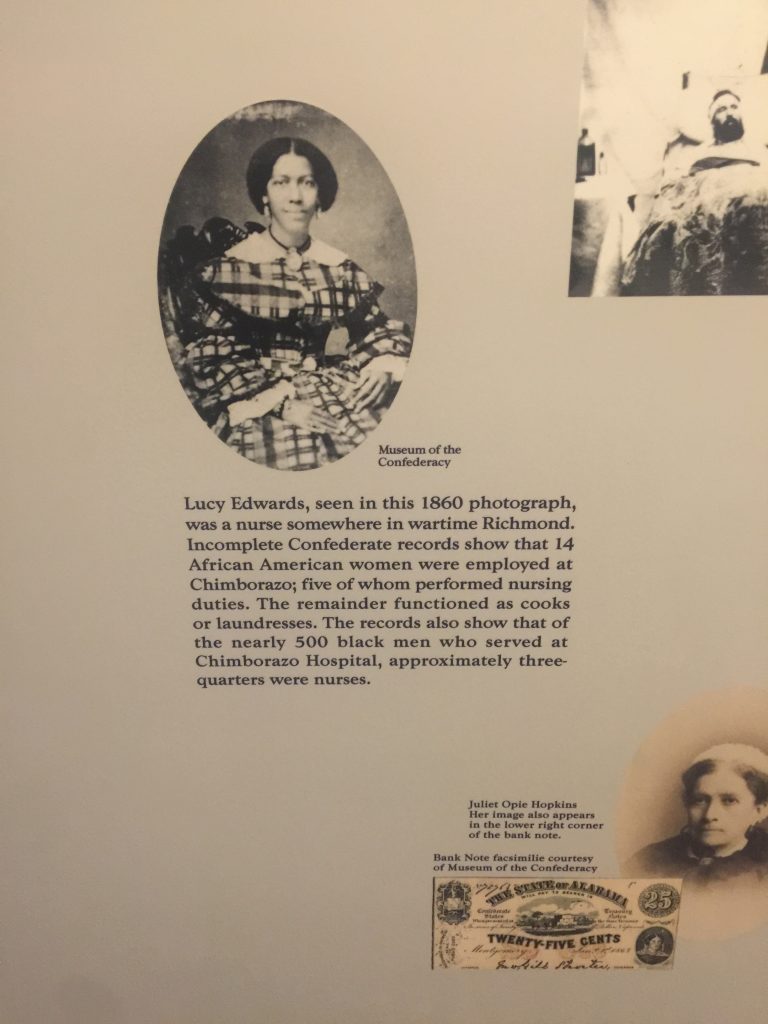 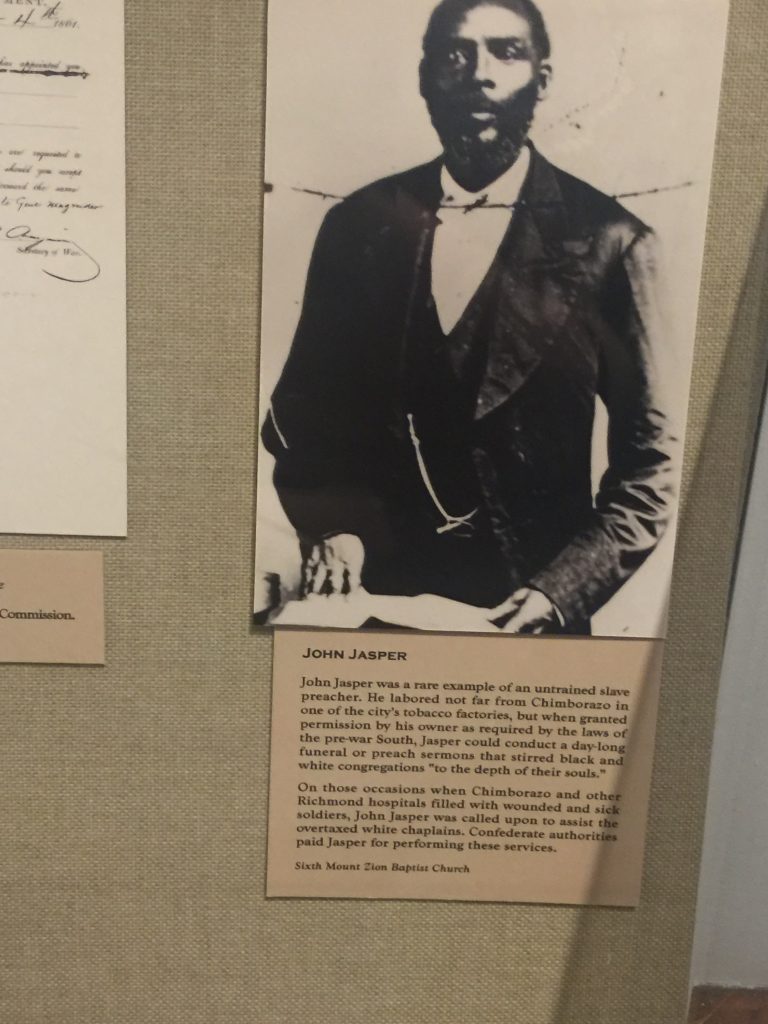 The room with artifacts was the most interesting to me, partially because it was clearly designed to be the main exhibit and partially because this is where I was going to have the most opportunity to actually learn about Chimborazo. The first display I came to was a dedication to the women who worked in the hospital, a narrative mostly focused on the heroics of nurses on the battlefield and the local women who ran hospitals out of the churches. In the corner of display though, there was a photo of Lucy Edwards, a nurse in Richmond during the war. Along with her photo they discussed the nearly 500 black men that worked at the hospital during the war, none of them are named elsewhere in the museum. The only other black person mentioned in the main room was John Jasper, an enslaved preacher who gave such a touching sermon that the Zion Baptist Church donated his bible and photos to the museum for their records. Before joining this project I would never think that the history of 500 people could be so easily brushed over in a historical record. Now, after six weeks of working on the Race & Racism Project and seeing the way that finding the history of marginalized groups requires reading against the grain and reading into small details, I am just eternally frustrated that a place that could have so much more history to share and expand their own archives with information about the 500 black nurses consciously chooses not to include that information.

Other features of the room included a diorama of a severed foot, including a very realistic fake shin bone made to look like it had been shot, many many field tourniquets, and a wall dedicated to the heroic Confederate surgeons. Focusing on the wall dedicated to the work of confederate surgeons, I noticed the way the displays talked about the Confederacy contradicted themselves at times. In one display they said the strength of the Confederate hospital system lay in the lack of government involvement, a result of the conservative, small government policies of the Confederacy. One display over, they talk about the Confederate Congress’ bill to weed out incompetent surgeons and keep the hospital system running to their newly implemented regulations, the exact opposite of the hands-off policy described just one panel earlier.

The next room was set up to view a video, enough chairs for maybe a dozen people and a TV screen that would look more at home in a college dorm than as a key display feature in a museum. On the walls there was a quote from a book by Susie King Taylor called A Black Woman’s Civil War Memoirs. I was impressed to find the book for sale at the front desk later. We asked to see the video but the man at the front desk apologized and said the TV was broken.

The diorama of the hospital during the Civil War was hard to understand just because of the massive size, a field that once housed dozens of medical tents now is a small park surrounded by houses and churches. A sign on the way out of the museum states that Chimborazo was the biggest war hospital in the world at the time, now reduced to the first floor of a weather station with a broken TV for video.

“That was the saddest Civil War museum I’ve ever been to,” was all my friend had to say on the issue. “At least lunch was good.”

One thought on “Chimborazo Medical Museum”